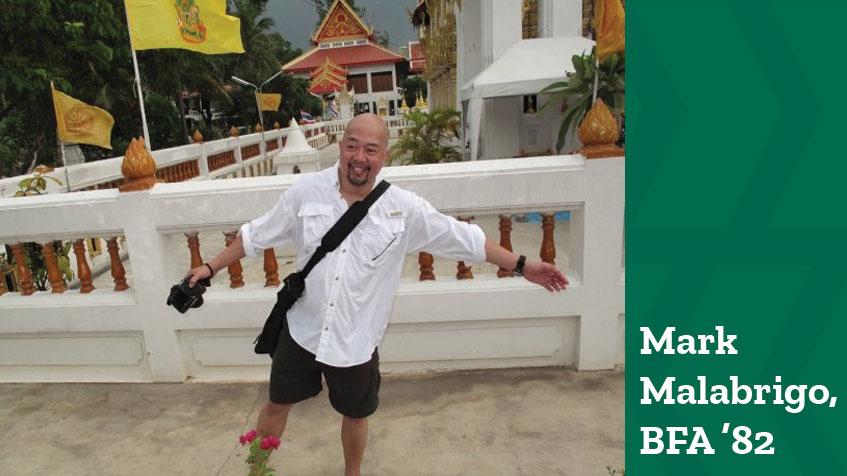 Mark Malabrigo, BFA '82, is the Group Art Supervisor for Neon-NYC.

What do you do? Other than pushing and bullying pixels across the screen?

I spearhead the creative on my assigned brand (under NDA so I cannot discuss nor mention.)

Over the years, I’ve become the go-to person for video, audio and animation, a position that I’ve cultivated and developed within the agency.

Tell us about your career path. Which one? I think I’ve had four.

After graduating, I packed up my ’74 Plymouth Fury and moved to New York to become a photographer’s assistant. After a few years, I started to take on fashion and music clients such as Stern’s, Sony, Virgin Records, MTV Networks, etc...

As technology started to take hold, I started to focus on technology and was later hired by MTV Networks to manage corporate interactive projects. My team, comprised of two OU graduates, Chris McKenzie and Mugur Marculescu, helped develop the industry-first prototype for a streaming video player that eventually became MTV Overdrive, which became the platform template for all the Viacom channels.

Which brings me to Neon… a complete change in direction. I have no formal training in graphic design, yet the managing partner brought in as an art director. Since then, I’ve grown to lead the creative on certain brands, as well as expanding the agency’s video capabilities.

By the way, I miss my Plymouth. You could’ve fit a whole studio apartment in that car.

What made you come to Ohio University? Were there other places you considered? I never really considered any other school. I was transferring from a community college for engineering when I met the recruiter from OHIO, who spoke about the fine arts photo department at (then) Siegfried Hall. I was intrigued and, eventually, switched majors.

How did the Scripps College of Communication equip you with the skills you needed to succeed? The core concepts of fine art and commercial photography were certainly invaluable. However, as poor starving art students, we were short of resources so we became adept at improvisation and invention out of necessity. When you don't have resources, you learn to be resourceful. 2x4s, shower curtains, duct tape, and drywall screws were the four elements of creation. Go ask Gary Kirksey, a friend through college and my roommate in the early New York years.

What about your experiences here was so memorable? Should I ever mention Court Street? Or playing racquetball with Terry Eiler for grades (kidding)? Maybe watching a photography set catch on fire because someone forgot to turn off their hot lights?

I had forgotten how beautiful the campus was. I had the opportunity to come back and speak to students years ago and said to myself, “How could I forget this?” For those of you walking around campus with your faces buried in your phone, please look up and take notice where you are. You, ladies and gentlemen, are luckier than you realize.

What advice do you have for current students?