Variations on a Rhythm: Profile of percussionist Roger Braun 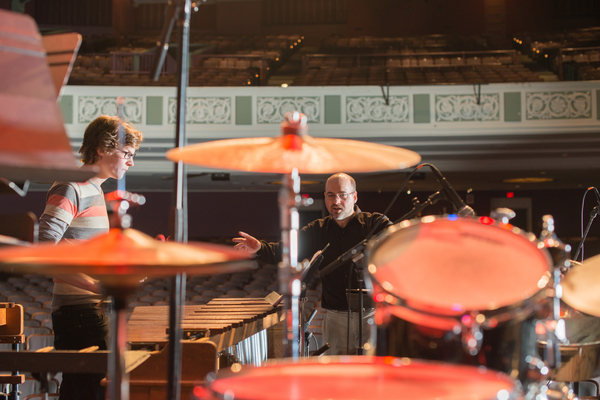 In the music rehearsal space, seven students cluster around a vibraphone—a metallic cousin to the xylophone—to peer at the curious things Roger Braun has done to it. Along the steel bars are wooden clothespins and tubes of cardboard that look oddly familiar.

“This toilet paper tube—as silly as it is—has a pitch-bending effect,” the Ohio University percussionist notes, explaining that the clothespins dampen the sound produced when he strikes the instrument with yarn mallets.

Braun’s compositional companion for the evening, Andre Gribou, has hidden a few surprises in his neighboring grand piano. The piano wires are punctuated with silver screws and strips of blue painter’s tape. These tiny objects will play a big role in the reverberations emanating from what the two music professors call “prepared instruments.”

The duo begins the performance, the vibraphone and the piano in sonic dialogue. The music surges and subsides; the students’ eyes are fixed on hands that move expertly across the keyboard and bars.

It’s clear that Braun and Gribou have a strong musical rapport; for years they’ve played live as a duo and as part of the Latin jazz group Los Viejos Blanquitos.

“My favorite thing is to play collaborative music—I like the synergies that happen,” Braun explains during a quiet moment in his office and teaching space on the top floor of Glidden Hall, where he’s directed Ohio University’s percussion program for 15 years. “It has a lot to do with the individuals I want to work with and what they bring as musicians.” 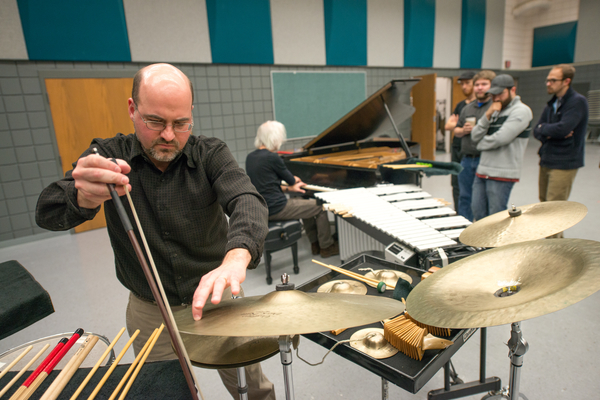 Braun has spent his career collaborating with a wide variety of musicians in performance groups that have toured the globe. In addition to his endeavors with Gribou, a fellow School of Music faculty member, Braun has played with Biakuye, an American-African world percussion troupe that included musicians from Ghana and Senegal, as well as Galaxy Percussion, which toured Japan and Korea. He’s gigged at the world’s biggest jazz music festivals, played with the industry’s top marimba and xylophone instrumentalists, recorded at Montreux, and jammed with Lyle Mays, a frequent collaborator with Pat Metheny.

These projects have allowed Braun to immerse himself in different musical forms—from African and Asian world music to Latin jazz and contemporary instrumental music.

“I can be a lot of different people musically, which is a lot more interesting for me than doing the same gig over and over,” he says. “A lot of people have said, ‘You can’t do it all.’ But I smile and say, ‘I try.’”

These days, Braun is focusing on improv performances with Gribou and creating new compositions under the name Ohio Percussion. He’s collaborating with former students and taking advantage of the ease of do-it-yourself music publishing by getting his work directly to fans via iTunes and other online sites.

When he does compose, he has what looks like the world’s treasure trove of percussion instruments at his fingertips.

In addition to the large xylophone, marimba, and vibraphone in his office and teaching space, Braun shows off a rare “boombakini,” a gift custom made by Dominican Republic musician Felle Vega. There are probably only 50 of these wooden, curved percussion instruments in the world, Braun says, and he has number 36.

Tucked between these impressive, beautiful instruments is a classic drum kit. Braun notes that he got his start with percussion like a lot of American teens do—providing the back beat for the local rock band. He played all over his hometown of Westport, Connecticut, and made his first recording at age 14, early musical experiences that pushed him to enroll in the nation’s top percussion programs at the University of Michigan and the Eastman School of Music. 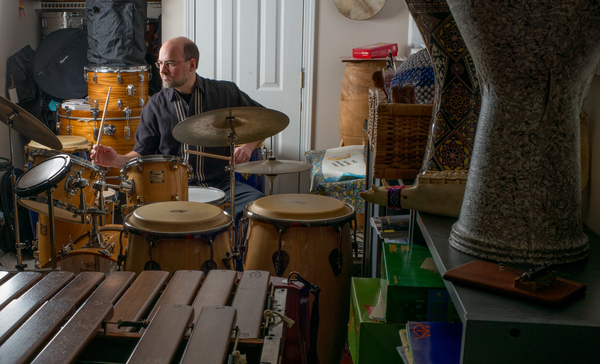 “I’m very much a strong drum set player at heart—it’s kind of like coming home for me,” he says.

Braun is no longer playing rock music, but the drum kit can have a featured role in his performances. Videos of Biakuye show the percussionist moving easily from hand-slapping the boombakini to teasing out shimmering tones on the vibraphone to wielding a pair of drum sticks on a kit’s snare and rack toms—all in the service of the group’s vibrant world music.

Although a lot of percussionists specialize in only one instrument—such as the marimba—Braun relishes working across a wide collection of musical tools.

At his classroom performance with Gribou, for example, Braun has stocked a table of small percussion instruments, such as piccolo wood blocks and Chinese jing cymbals. A series of larger cymbals surround them. At various points in the piece, Braun strokes a violin bow across the edge of the cymbal to create a haunting sound.

When the room goes silent, the students pepper the duo with questions about the art of improvisation, and offer their own insights about how performing with others requires some vulnerability, personal chemistry, and trust.

Braun notes that he and Gribou have an easy rapport—which translates to a fruitful creative partnership.

“We just connect really well musically,” Braun notes later in Glidden Hall. “We have a wide understanding of different musical styles—we’re not limited in what we can play—and we uniquely do it without written music in front of us.” 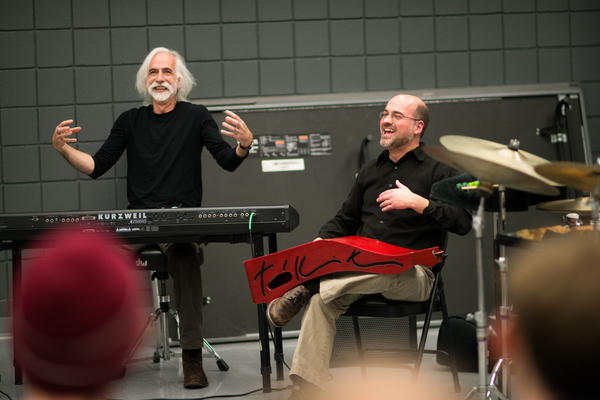 Gribou and Braun share stories from their performances--as a duo and with the Latin jazz group Los Viejos Blanquitos--with Ohio University composition students. In July, the duo was slated to perform at Chateau D'Oex outside of Switzerland, at the International Society for Improvised Music. Photo credit: Ben Siegel/Ohio University.

The two both came out of a rock ‘n’ roll background but spent time at conservatories, so have a “shared vocabulary” in classical, jazz, and rock music and a similar artistic point of view, says Gribou, professor of piano/composition/general studies.

“When I throw something out, Roger will be there in two seconds,” he says of their improv performances. “It’s so incredibly cool to be able to do that onstage with somebody.”

While Braun continues to compose his own work, he notes that improvisation has become the focus of his performances with Gribou, as it allows him to draw on his wide range of musical instruments and music styles that he’s played throughout his career.

Can he pick a favorite style? Braun has a passion for all of it.

This story will appear in the Spring/Summer 2015 issue of Ohio University’s Perspectives magazine.