Gregory Springer crawls through a tube-shaped limestone cave, on hands and knees, crunching the sticks and twigs that cover the floor. He continues like this some 300 feet in a space that is not big enough for him to carry a backpack, so he drags a line pulling a dry bag full of supplies behind him. The entrance to this cave is situated alongside the north bank of West Virginia’s Greenbrier River. The carpeting of organic matter is courtesy of a flood that swept the material into the cavern.

When Springer finally enters a room big enough to stand in, his headlamp illuminates his breath in the 55-degree air. Before it has time to fog up, he grabs his camera and takes a picture of the high-water mark left by a flood just this year. The mark is above his head, and well above the height of the entryway leading to this spot. Springer acknowledges that the only thing he still fears in a cave like this is drowning.

The recently flooded cave’s next-door neighbor, Greenbrier River Cave, has been productive for the geologist’s research. Its higher elevation allows Springer to record the rarest of floods—those that occur so infrequently they can be measured in geologic time.

“The formal flood records are relatively short, and we rely on those to estimate the likelihood of the big floods,” he says. “But as you can imagine, if you have a short period of record and you’re really interested in the extreme events, then that lack of data greatly decreases the accuracy of your predictions.” Just ask the people in the nearby town of Alderson, which got hammered by a 100-year flood in 1985 and then again in 1996.

Boosting the accuracy of flood predictions is just one reason why Springer, associate professor of geological sciences at Ohio University, goes underground to unlock the mystery of these caves. He is likely the only person in the field to use a combination of cave sediments, stalagmites, and archaeological data to explain human impacts on landscape and climate, as well as the response of land and water to environmental changes. His work has yielded data on droughts and floods that date back not hundreds, but thousands of years, which informs the current science on climate change.

Springer’s passion for unearthing such mysteries of the region’s caves began at an early age. A native of Paden City, West Virginia, which is on the banks of the Ohio River, Springer first conducted cave research as an undergraduate at West Virginia University. He had caved with his father as a teenager, but once he arrived at college, Springer quickly joined the student grotto (caving club) and soon enough was caving nearly every weekend.

He became president of the grotto, switched his major to geology, and started exploring rarely entered caves along the nearby Cheat River. A 1985 flood had also impacted communities along the Cheat, and Springer asked his adviser if he could research the impact of floods on those caves and nearby areas. In the meantime, he worked on overcoming his fear of the dark. It took 10 years.

Today Springer fearlessly walks through Greenbrier River Cave holding a cake cutter he uses as a trowel, pointing to easily visible bathtub-style rings left by the so-called slackwater deposits from the 1996 and 1985 floods. Inside a higher passage is evidence of a considerably earlier flood visible only to the trained eye. Springer checks in on a trench dug by one of his graduate students. It looks like the site of an archaeological dig, which is essentially what it is. He points to a section of mud 10 centimeters thick that has a “clearly laminated, classic slackwater” appearance. That is, it looks like the pages of a closed book made of thin horizontal lines of sediment rather than sheets of paper.

In this case, it means the flood waters were high for an extended period of time. Springer knew this was worth investigating, and when he sent off a sample to get a radio carbon date on the sediment, it turned out in fact to be evidence of a flood that dated back approximately 2,000 years.
“A 2,000-year-old flood that was 37 percent larger than any historic flood,” he says, calling into question our current understanding of what constitutes a flood with a 100-year recurrence interval, determined by extrapolating probability from historic flood events.

These cave sediments are Springer’s area of expertise—so much so that he is writing the entry on them for the upcoming second volume of Encyclopedia of Caves. “I don’t see all cave dirt as being the same. I see it as unique,” Springer says, “It allows me to see a richer picture.”

Other research, funded by the National Speleological Foundation, has Springer examining the mechanisms by which cave streams enlarge cave passages, such as a rise in water velocity, which can cause structural damage. Previously, Springer discovered that intense water eddies—similar to miniature underwater tornadoes—could cause significant erosion by creating “potholes” in the walls of the cave. 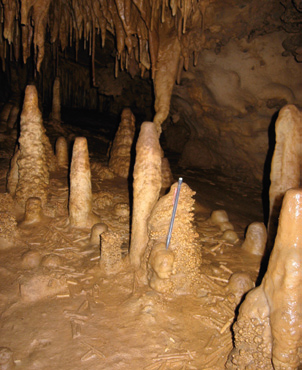 “Conceptually, I think of caves being dissolved by natural acids, like carbonic acid, which is in Mountain Dew,” Springer says, using an example at hand—he chain drinks diet Mountain Dew for the caffeine that keeps his energy from flagging. “But also, there’s a lot of physical erosion,” he adds, noting that there’s surprisingly little research on the topic.

The sediments aren’t the only clues to the past that caves offer. Springer has made discoveries about the planet’s drought cycles and early land use patterns by analyzing the stalagmites in the Buckeye Creek Cave. Stalagmites, the column-shaped formations protruding from the cave floor—a stalagmite 2 feet tall can be 1,000 to 150,000 years old—hold ancient climate records.

“Using stalagmites allows us to see things that would otherwise be missed because the evidence doesn’t survive on the surface,” Springer says. “Stalagmites are a gold standard for paleoclimate work. They can supersede existing climate records if you can correctly interpret them.”

The calcite deposits that form the stalagmites contain stable oxygen isotopes, which are types of oxygen that differ only in their weight. These isotopes can indicate three things about the water that deposited the calcium carbonate. One, the source—for example, did that water originate in the Atlantic or Pacific Ocean before being rained out in West Virginia? Two, air temperature outside the cave. And three, seasonality—did more rain fall in the summer or winter?

“Our paleoclimate records indicate wet-dry cycles. If we can get a detailed enough history of paleofloods floods unobserved by science, we can get an effect of climate on flooding in the past,” Springer says, noting that floods are recorded in magnitude and frequency—both of which may be affected by human-made climate change. “Climate change at least hypothetically will change one or both of those so that the floods may get bigger, they may get smaller, or you may get the same-sized floods, but they may happen more or less often.”

A study Springer and colleagues published in the journal Geophysical Research Letters using stalagmite data offered the most detailed geological record to date on climate cycles in eastern North America over the past 7,000 years. The research yielded evidence of at least seven major drought periods during the Holocene era.

Geologist Gerald Bond suggested that every 1,500 years, weak solar activity caused by fluctuations in the sun’s magnetic fields cools the North Atlantic Ocean and creates more icebergs and ice rafting, or the movement of sediment to ocean floors. Other scientists have sought more evidence of these so-called “Bond events” to examine their possible impact on droughts and precipitation, but have been hampered by incomplete records, Springer explains. 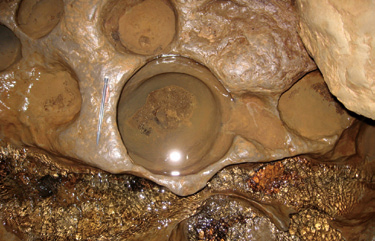 Springer has examined the formation of cave “potholes,” shown with a pencil to illustrate scale. Photo courtesy of Gregory Springer.

Springer and collaborator Harold Rowe of the University of Texas at Arlington found a much more detailed record from a stalagmite in Buckeye Creek Cave. They cut and polished the stalagmite, examined the growth layers, and then used a drill to take 200 samples along the growth axis. They weighed and analyzed the metals and isotopes to determine their concentrations over time.

The data from the study were consistent with the Bond events, which showed the connection between weak solar activity and ice rafting. The study also confirmed that this climate cycle triggers droughts, including some that were particularly pronounced during the mid-Holocene period, about 6,200 to 4,200 years ago. These droughts lasted for decades or even entire centuries.

The early Native Americans burned trees to actively manage the forests to yield the nuts and fruit that were a large part of their diets. Though better land stewards than the European colonialists who followed, these early residents contributed a significant level of greenhouse gases to the atmosphere.

“They had achieved a pretty sophisticated level of living that I don’t think people have fully appreciated,” says Springer, who published the study with Rowe in the journal The Holocene. “They were very advanced, and they knew how to get the most out of the forests and landscapes they lived in. This was all across North America, not just a few locations.”

The geological research complements work that archaeologists have pursued on Native Americans in the region.

“There’s only so much we can tell from material culture—artifacts—how much (Native Americans) were impacting their environment. He’s looking at the geologic record that indicates that they were doing large-scale burning that impacted the environment,” says Sarah Sherwood, an assistant professor of anthropology/archaeology at Dickson College who also has worked in and around caves in the Greenbrier River valley.

She points out that Springer’s work on the surface processes of river valleys is also of importance to archaeologists. “Archaeologists have a tendency to not grasp how much landscapes have changed over time. Or that they change so significantly over a fairly brief time period,” she says, “He’s getting a finer chronology of the behavior of these rivers, which is very helpful to us … Have these (archaeological) sites been buried? Or is the river cutting back and forth and eroding those deposits?”

The ability to impact big-picture scientific questions such as these keeps Springer coming back to the underground world. And now as president of the West Virginia Association of Cave Studies, Springer continues to spend as many summers and weekends as possible beneath the Earth’s surface, mostly for science but also to occasionally explore virgin cave passages.

“I like the puzzle, from the scientific perspective,” he says. “The caving? That’s just the exploration – to explore a place no one’s been before? It’s rewarding.”

This article appears in the Spring/Summer 2011 issue of Perspectives magazine.