Can a new technology treat fracking wastewater on site?

An Ohio University engineer is developing a new technology to clean the wastewater that results from hydraulic fracturing (or “fracking”) on site.

With more than $2 million in support from non-profit corporation The Research Partnership to Secure Energy for America, the Ohio Third Frontier initiative, and the university’s Russ College of Engineering and Technology and Technology Transfer Office, Jason Trembly and partners plan to design, demonstrate, and commercialize an innovative water management process.

“(The technology) eliminates the extra cost for transporting the water—and also eliminates the need for disposal sites, which addresses concerns about wastewater wells,” says Trembly, an assistant professor of mechanical engineering and associate director of the university’s Ohio Coal Research Center.

The process uses technologies similar to those deployed at power plants and in refining industries. In the first portion of the process, ultraviolet light and water softening technologies used in municipal wastewater treatment remediate bacteria in the water and remove hard water ions. Then, via a pump, high-pressure wastewater is treated in a reactor powered by gas from the well. 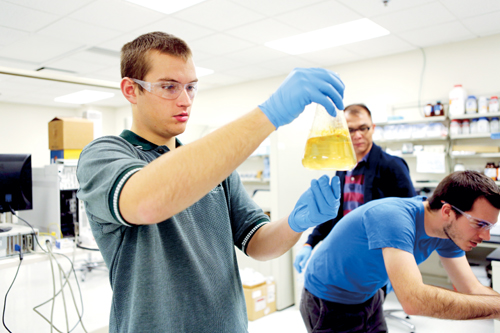 This process transforms the water into a supercritical state, where at very high pressures and at a very high temperature, the water takes on properties of both a liquid and a gas. The contaminants—salt and hydrocarbons—either precipitate out as solids or gasify into hydrogen, leaving only clean water. The salt can then be used for a variety of applications such as road de-icing, and the hydrogen is returned to the process to heat the reactor.

“This is very impressive technology that could mean almost all of that water could be reused instead of hauled to a site for deep geological injection,” says David Bayless, Ohio University Loehr Professor of mechanical engineering.

Over the next 24 months, Trembly will work with partners Hess Corporation, Aquionics, Parker Hannifin, and the Ohio Gas Association to construct and operate a fully integrated prototype capable of treating a barrel per day of water. Data will be used to develop a detailed design for a commercial-scale unit and to further demonstrate the advantages of the process.

The project is one of several new initiatives in the Russ College of Engineering and Technology that explore the effects of horizontal drilling and hydraulic fracturing.

This article appears in the Spring/Summer 2013 issue of Perspectives magazine, which covers the research, scholarship and creative activity of Ohio University faculty, staff and students.