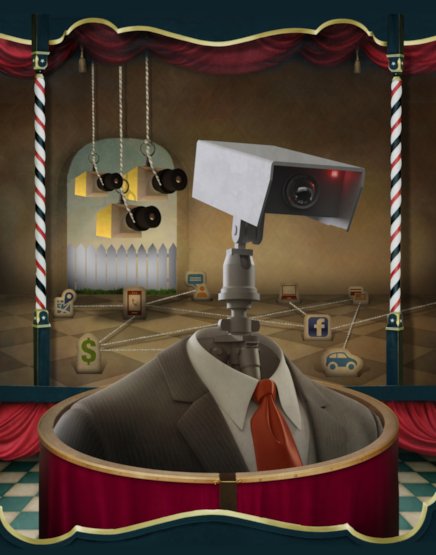 From high-tech airport security checks and banks that scrutinize the specifics of your credit card purchases, to city street cameras and the data collected on your Facebook postings, surveillance is "in the DNA" of modern society, argue the authors of a new book.

"Terms like Big Brother and privacy no longer work," says John Gilliom, an Ohio University professor of political science. "Everything you know about surveillance is either wrong or incomplete. We push the readers to ask themselves a series of questions that compel them to rethink things."

Gilliom and Torin Monahan of the University of North Carolina at Chapel Hill are co-authors of SuperVision (University of Chicago Press), which details the many ways in which our activities are tracked. Although avoiding the digital watchdogs is almost impossible—even for those who stay off Twitter and pay for goods in cash—the authors seek to raise awareness about how much we're under surveillance and its implications for a democratic society.

One concept the authors seek to debunk is that "big government" is the main source of modern surveillance. It's actually big corporations, sometimes working in conjunction with government agencies, that advance and use surveillance technologies, they argue. In the wake of the book's publication, two news stories—Edward Snowden's allegations of a mass public/private sector effort to track Americans' personal information, as well as law enforcement's work with cell phone and internet companies to track user data to apprehend suspects in the Boston Marathon bombing—serve as high-profile examples of the scholars' argument.

The book seeks to appeal to a general readership by noting how some of our common daily tools, such as cell phones and social media use, play in surveillance. Cell phones archive the locations and movements of their users, "just waiting for the FBI, or hackers, or your creepy stalker ex-boyfriend to access and exploit," the authors write.

The technology can be used for good, too, they are quick to point out. GPS capabilities in cell phones are frequently used by authorities to locate people in distress. Citizens may snap photos or shoot video that can aid law enforcement in capturing criminals (such as in the Boston Marathon bombing case).

But surveillance goes far beyond our high-tech toys. The authors point out how big entities—schools, employers, banking institutions, insurance companies—are practicing forms of surveillance as well. Some of these systems may reduce discrimination, such as computerized traffic cameras that flag speeders for tickets regardless of their race, age, or make of car. On the other hand, the authors note, some entities may use surveillance data to make important decisions about us, such as whether we're eligible for jobs, insurance, or a bank loan.

"What is scariest to me about surveillance is the way it affects our life chances, but it is hidden," Monahan says. "We are sorted into groups of people that are (considered to be) risky by organizations, and that changes lives."

The authors note that many people willingly sign up for their own surveillance, out of a desire for security or belonging. You may buy a home in a gated community, for example, out of fear for safety, or join Facebook to avoid the fear of being left out of social conversations. The need to have someone watching out for us may override concerns about loss of privacy, SuperVision notes.

For those feeling concerned about their exposure, the authors offer tips on how to make Facebook or Twitter profiles more private or how to decrease your virtual presence, including through the use of anonymizing software. There are even firms for hire that can "scrub" online information.

But the authors also ask the readers to reflect on big picture questions as well.

"Ultimately we wanted to write an enlivened, imaginative approach to thinking about surveillance issues, raising questions of whether or not surveillance and democracy can actually co-exist," Gilliom says. "Under these new circumstances, what are our hopes for having an egalitarian society?"

This article appears in the Autumn/Winter 2013 issue of Ohio University's Perspectives magazine.