Inside Out: Artist Rajorshi Ghosh shares his vantage point

Rajorshi Ghosh grew up as the child of two architects. He lived in a modern, western-style home in urban India and could read blueprints and identify the work of building luminaries such as Louis Kahn at an early age.

Everyone told him that he, too, would become an architect. It was in the blood.

Of course, he says, this made him want to defy his presumed destiny.

Ghosh was drawn to art, and came to the United States to study it at UCLA. But as he began to mine his creative muse, a funny thing happened: The architecture background? It began to emerge a bit.

An early series of pieces, Rooms by the Sea, contemplated the same slice of ocean view through various architectural frameworks: Vertical bars. Grids. One piece mimicked two interior walls that didn't quite join at the corner, instead revealing a burst of light and cerulean blue. The sea, a constant.

The author Salman Rushdie once stated that wherever he goes, he takes a piece of the Bombay sea with him, Ghosh says. The artist's father also once sent him photos of an old prison fortress on the islands of Andaman and Nicobar, off the southern coast of India, where one could almost hear the sea from the prison cells, a juxtaposition that Ghosh finds particularly ironic and rather dystopic, he says. In Los Angeles, the sea loomed in the background. For Ghosh, these images, words, and anecdotes came together to inspire the installations, which have been exhibited internationally over the last several years. 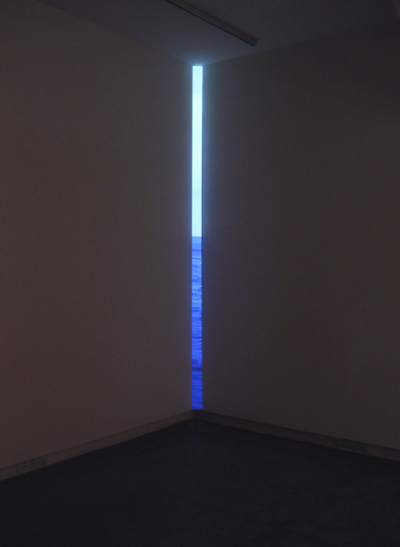 His newer works continue to contemplate the tension between our constructed interior spaces and our external landscapes, as well as how a contemporary artistic practice can effectively illuminate and mediate our experience of such interstitial places.

The pieces—which range from drawings, photos, mixed media, and video to site-specific installations—can draw the viewer in with the familiar, "but, on closer inspection, you have a new awareness of the mundane," he says.

A new project in the works, Accidental Mapping, extracts found images on Ebay of mirrors for sale. Each photograph taken by the seller captures a small slice of life caught in those mirrors, which Ghosh has extracted to assemble a series of accidental documentaries of ordinary places in the United States. Ghosh sees this series as a witty antidote to American photographer Stephen Shore's monumental photographic work on the American landscape, a work that he admires greatly, he says.

A recent installation titled JAN 03 2012 NYC is an hour-long recording from the unmanned train that circulates between the terminals in the John F. Kennedy International Airport and the Howard Beach Station in Queens, New York. Shot entirely on the artist's iPhone during transit, in a continuous pan, Ghosh says the video documents the disquieting complexities that underlie spaces of modernity.

Ghosh splits his time between Athens, Ohio, and a studio in New Delhi, and notes that the work that emerges from each location is rather different. In India, he's constantly aware of the class system and how globalization is changing the landscape of his native country.

One recent series created in New Delhi, Diagram of Forces, takes news photos of conflict and blows them up to create abstract images that the artist then prints on large pieces of sheet metal. He uses automobile workers to bend and manipulate these sheets, creating warped photographic sculptures that would be mounted on exhibit walls. It is intense physical labor; the metal literally lashing into the artist's arms and hands. The pieces take on forms that are uniquely their own, regardless of the intentions of the artist. 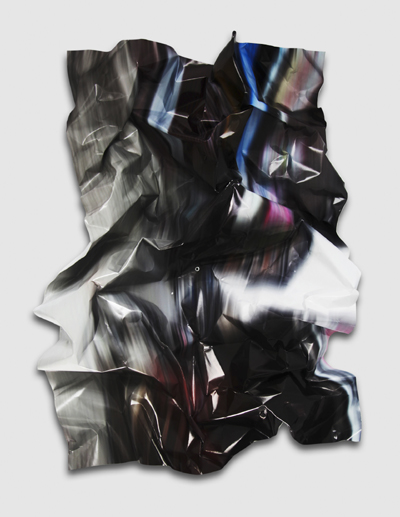 When Ghosh is back in the United States, he notes that he's exposed to more international news and uses the internet to maintain a sense of continuity in an otherwise fragmented life, creating works that consequently contemplate broader issues. One series, Invisible Cities, takes night-time satellite imagery of cities in political crisis and manipulates them to become something more abstract: a swath of cosmos from various views. But the captions jar the viewer back to more terrestrial concerns: This is the landscape of human light on the night of conflicts in Baghdad, Iraq; Cairo, Egypt; and Dhaka, Bangladesh.

"It's a futile attempt to reconcile the polarized gulf," he says, "between what you see and what you know."

This story appears in the Spring/Summer 2014 issue of Ohio University's Perspectives magazine, which covers research, scholarship and creative activity.