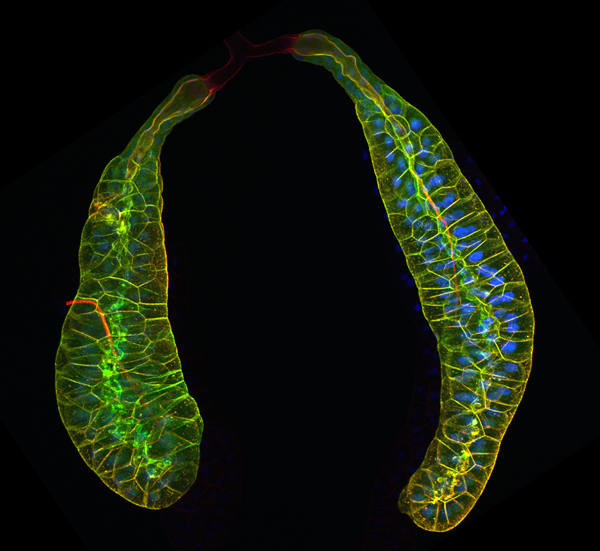 The image shows a pair of salivary glands from the larva of a fruit fly. The CLIC5 protein outlines and provides shape to the cells that make up the developing glands. Image courtesy of Mark Berryman and Soichi TandaHearing loss. Birth defects. Cancer. What do these medical problems have in common? Two Ohio University biology researchers think that one tiny protein in the body may play a key role in regulating these issues.

Hearing loss. Birth defects. Cancer. What do these medical problems have in common? Two Ohio University biology researchers think that one tiny protein in the body may play a key role in regulating these issues.

The eye-popping images on this page show how Mark Berryman and Soichi Tanda have been tracking the role of the protein CLIC5 in the embryos of fruit flies, which are commonly used by biologists to understand how the living body develops—and succumbs to disease.

Berryman discovered CLIC5 in human placenta tissue while studying the proteins that control the structure of cell surfaces. Understanding the variations in cell surfaces can help scientists understand the distinct functions of different types of cells in the body, explains Berryman, an associate professor of cell biology in the Heritage College of Osteopathic Medicine.

Researcher Kenneth Johnson and colleagues at the Jackson Laboratory in Maine later discovered a certain group of mice that were missing CLIC5. The animals under study were deaf and had difficulty orienting themselves in their cages, moving erratically.

For more than 12 years, Berryman and Tanda, an associate professor of biological sciences, have combined their expertise in cell biology and genetics to understand CLIC5, both in fruit flies and in the mice.

Our inner ears contain sensory hair cells that allow us to hear sound and control our sense of balance. The surface of these cells is covered with stereocilia, tiny antennas that respond to vibrations and send electrical signals to the brain.

It's the malfunction of these stereocilia that cause human hearing loss. But how, exactly, do these little structures break?

The Ohio University team’s research has shown that CLIC5 supports the biological links between the surface of the cell membrane and the inner structure, or cytoskeleton. In a healthy person, the stereocilia of the cell membrane will stand up straight. Think of placing your hand inside a glove—your fingers give structure to the garment, Tanda says.

When hearing loss occurs, CLIC5 can't do its job. The links break, and the membrane loses its shape. The glove goes limp.

In a more recent study, Berryman and Tanda, along with researcher Felipe Salles and colleagues at the National Institute on Deafness and Other Communication Disorders, found that CLIC5 doesn't act alone. It's actually part of a scaffolding of several proteins that ensure the structure and health of the stereocilia.

These findings add to a growing understanding of the biology of our inner ear, Berryman says, which, in turn, may help scientists achieve a goal of developing a biological cure for hearing loss in the next 10 years.

“In the long term, if we know more about the fundamentals of how the proteins work, this could help other researchers who are working on gene therapy to improve hearing,” Berryman says. “Maybe it could help protect cells against loud noises, make them hardier or help them live longer, for example.”

But the CLIC5 research could have implications for other health problems too. Berryman pulls up a series of brightly colored microscope images that show the fruit fly in various stages of embryonic development. As the fly matures, the cells build organs. Berryman points to a bright line that appears to be zipping up the skin along the insect’s back. The zipper? That's CLIC5.

Understanding how CLIC5 does the job during normal embryonic development could help scientists learn how the protein could be used to understand birth defects or how to heal wounds more quickly.

If CLIC5 sounds like some kind of biological hero, the scientists are quick to point out that this is not always the case. CLIC5 has been shown to also help the spread of cancer cells in the body.

“One interesting aspect of the protein is that it works differently in various biological processes—one is good for us, one is bad,” Tanda says. “It could be considered a double-edged sword.”

This story originally appeared in the Autumn/Winter 2014 issue of Perspectives magazine.