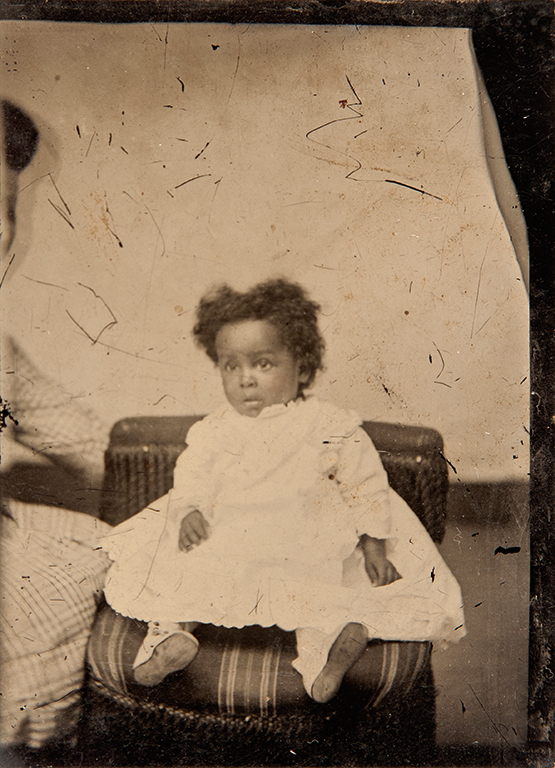 During the seven months that Laura Larson waited to adopt her daughter from an orphanage in Ethiopia, she came across the hidden mother photographs. The images on tintypes, created in the late 19 th century, featured a series of women obscured by curtains, tablecloths, or furniture while they held squirming infants still for portraits.

“To me these were so poignant, really funny, and really disturbing, either because of the child’s expression or the fact that the mother’s face is scratched out,” recalls Larson, an associate professor of photography at Ohio University. “The material was so emotionally rich. The photographs connect you to the subject matter, but they push back, too.”

Larson began conducting research on the historical images and connected with Indiana photography dealer Lee Marks, who has collected almost 600 hidden mother photographs over the last 20 years. The work inspired Larson to curate an exhibition of these historical images and write a book that incorporates the photos, with a narrative text that weaves in her own experience of the anticipation of motherhood.

Portraits for the Masses

Before the invention of photography, only the wealthy could afford to commission painted portraits. The hidden mother photos are hallmarks of a time period when photography made portraiture more economically affordable for all social classes, Larson says. Photographers ran portrait studios, and some offered mobile services to reach more audiences. The development of the tintype allowed photographers to inexpensively print the images on small metal plates that could be framed or placed in jewelry that could be carried or worn.

Although many photographs exist from this era of mother and baby, the stand-alone images of infants and children speak to the affordability of purchasing several pictures, Larson notes. Because the photographs required long exposure times, however, shooters had to work with the mothers to come up with creative solutions to hold the child still while the adult remained out of frame.

Larson found old journals from photographers of this era that explained some of the techniques: throwing fabric over the mother’s head and then seating the baby on the lap; hiding the mother behind a pedestal or pram. Sometimes photographers scratched off the emulsion of the metal plate where the mother’s face appeared. The unedited images, showing mother’s identity obliterated, are eerie.

Although one can read meanings into the hidden mother images, Larson is quick to note that her research does not suggest that the obscured mother represents any attempt to marginalize the role of women during this era.

Larson feels that the photos “poetically invoke the experience of maternity—how mothers have to balance the cultivation of attachment and independence when raising a child,” she says.

A friend initially sent the hidden mother images to Larson due to her interest in photography from the late 19 th century and early 20 th century. For several years, Larson has been examining a phenomenon called spirit photography, in which images were blatantly staged to suggest the appearance of the ghostly dead among the living. Her interest in this artistic phenomenon inspired her project Electric Girls in the Invisible World, a film about teenage girls who become entranced by Eusapia Palladino, a Victorian era medium.

“Right now there is a lot of interest in 19 th century processes for today’s photographers,” Larson says. “While there was a fear that digital photography would render early analog processes null, it has had the opposite effect—it’s invigorated it.”

But as Larson contemplated the hidden mother photographs for their historic and technical values, she couldn’t help but connect the images to her very personal journey to motherhood. Enough of the mother appears in these photos—a stray, pale hand reaching out to an infant; the gentle embrace of the arms under cloth—that one can sense the tenderness and love that these women felt for their children.

The appearance of these photos had synchronicity with Larson’s long wait for the international adoption process to unfold. She writes of this experience eloquently in her forthcoming manuscript, a portion of which was published in Cabinet magazine in 2013. The reader experiences Larson’s great anticipation, anxious separation, and longing for the little girl whom she had met only through photographs.

There is a growing interest in hidden mother photography, as well as a rising market for it, Larson says. Although the images can be purchased in thrift stores for a mere quarter, in the last few years dealers have been fetching $5 to $20 per photo on online shopping sites such as eBay. Some have sold for hundreds of dollars.

Images in good condition can be hard to find, says Marks, who has collected hidden mother photographs that are tintypes, daguerreotypes, and in other formats. Some of these photos are very old, pre-dating the Civil War. While some of the images were saved in protective mats or frames, others were simply kept in clothing pockets and contain quite a bit of wear and tear, says Marks, who has published a selection of her images and exhibited them at the Columbus Museum of Art.

Though the hidden mother images have piqued interest among collectors, there hasn’t been much critical analysis of the photos, Larson notes. She hopes that her project will help add historical context and a fresh narrative to these arresting artifacts.

Marks says that Larson has a good eye for selecting an intriguing mix of the images. By uniting them with her personal motherhood story, Larson offers a unique angle on the subject.

“That’s why I want her to get this book done,” Marks says. “She’s doing something that others have not.”

The Hidden Mothers project debuted at the Blue Sky Gallery in Portland, Oregon, in August 2014. In spring 2015, the Palmer Museum of Art at Penn State University hosted the show. It will travel next to the Allen Memorial Art Museum at Oberlin College in fall 2015. Larson plans to publish the companion manuscript. The project was funded in part by a grant from the Ohio University Baker Fund.

This article originally appeared in the Autumn/Winter 2014 issue of Ohio University’s Perspectives magazine.