When artist Melissa Haviland decided to capture the act of breaking seven entire sets of fine china on film, some of the crew members on the shoot cringed at the demise of so many delicate plates and teacups. The rest? They were cheering on the destruction.

This experience on the set of "Dinner Music," a collaboration with video artist David Colagiovanni, sums up the dichotomy of reactions that people—especially women—have to Haviland's work. At first blush, fine china may not seem to be a particularly political or emotionally charged topic, calling to mind tradition, femininity, etiquette, domesticity. For some, it's a symbol of maternal heritage, of all the sweet and refined qualities one conventionally associates with womanhood. For others, it's an oppressive sign of the role that females are expected to play: orderly, subservient, dainty, polite.

That's why it's such a catharsis to break it, Haviland says. Smashing a sugar bowl ignites conversation.

"We need to be educated about the 'scripts' in our lives." she says. "Etiquette is a way of discussing the underlying cultural framework we're given that can trap us—or not."

Haviland, an associate professor of art at Ohio University, has long been fascinated by symbols of traditional femininity. A printmaker who has experience with jewelry and costume design, her work plays with images such as sewing pins, teacups, hankies, and china platters and presents them in startling ways. Pins are rendered large and imposing, ready to be wielded as a weapon; teacups shield a bare breast.

Over time Haviland expanded beyond the print to installations, such as "Contemplating a Need for Indulgence," a black lace-trimmed tent with velvet cushions that invited viewers inside for a proper Victorian cup of tea. Other exhibits, such as "Pattern of Refinement," featured the artist setting rows of miniature place settings with fine china, or walking in a circle with a dinner plate balanced precariously atop the head—calling to mind a young girl learning proper posture, at least until the china shattered against the floor in a spectacular clatter.

Although she bears the surname of one of the most famous fine china companies in history (there's no relation that she's aware of), Haviland says that she did not grow up in a fine china household. Her family dined on Corelle, an everyday white glass dining set, and she and her father worked in the nearby Ball glass jar factory. It's a familiar story for anyone growing up in middle-class America—even for those raised with a china set stashed in storage, prized only for "special occasions." Even today, most women rarely break out fine china for dining, but it's still an expected purchase for weddings.

Because fine china's reputation continues to loom large, Haviland has enjoyed exploring its various meanings in her work. But her interest is not just aesthetic. To bring deeper context to her art, Haviland secured a grant from the Ohio University Research Council to travel to china factories in the United States, England, and France to learn more about the craft of china production. She visited traditional plants in Britain where entire towns—much like the coal towns of Southeast Ohio—were built around china manufacturing, as well as a company in Greensboro, North Carolina, focused on creating replacement pieces for more than 300,000 fine china lines.

The research helped Haviland take china out of the abstract and understand it more as a manufacturing industry and a product. It spawned new work, such as "A Host of Options," which featured dozens of laser-cut paper teacups in black, gold, silver, and mother-of-pearl affixed by corsage pins to the wall to create fine china wallpaper. The installation appeared at the University of Wyoming in Laramie in November 2012.

As Haviland got deeper into the fine china industry research, she also chose to explore other creative avenues for expression. She began working with Colagiovanni when she needed someone to videotape her installation performances. Together, they developed a plan for an entirely new project that merged their experience and interest in performance, installation, and video.

The first piece from the project, "Music for Teacups," is an 8-minute film that creates rhythms and patterns from the visuals and sound of fine china breaking. Shot outdoors in various U.S. locations, the experimental video plays with the natural sounds and motion of each teacup, creamer, and plate rolling, chipping, and smashing against rock or cement. The film is beautiful and hypnotic, humorous and startling.

"I just wanted to see what it looked like when a teacup opened up and split," Haviland explains. "It's an exciting moment for the viewer. It's very rebellious."

Shot with a high-speed camera, Colagiovanni used no special effects to create the visuals and sounds, but the piece required hundreds of hours of work to draw out the natural, bell-like music of teacups tearing apart.

"We shot it in slow motion and wanted to see what happened," he says. "It became more about the sound and the image than just the image alone."

The work is a bit of a departure for Colagiovanni, who previously had been an artist in residence at the Morehead Planetarium and Science Center in Chapel Hill, North Carolina. (This year he's a visiting professor of art at Ohio University.) His films explored flight, from astronauts to amateur soaring enthusiasts. The teacups project also considers the gravitational pull on objects—yet in a much more whimsical, abstract way—and ties into Colagiovanni's interest in experimental filmmaking.

Prior to a screening at the Athens International Film and Video Festival in spring 2013, "Music for Teacups" became the centerpiece of a new joint installation that Haviland and Colagiovanni debuted at the 621 Gallery in Tallahassee, Florida, in February. The piece featured hand-printed teacup wallpaper that lined the walls of the gallery. "Music for Teacups" played on a screen while the artists carefully walked a balance beam, holding pieces of fine china and silver platters. 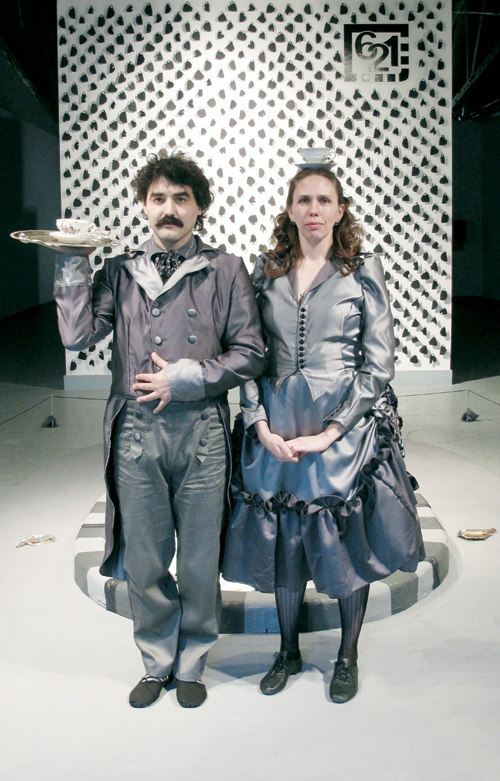 David Colagiovanni and Melissa Haviland debuted an installation featuring "Music for Teacups" at the 621 Gallery in Tallahassee, Florida in February 2013. Photo by Michael Austin Diaz.

The complex piece also featured bookmaking and record production. The artists created a 25-foot-long book of teacups laser cut from a continuous piece of black paper, displayed accordion-style for gallery visitors. The duo also pressed the music from the film to a vinyl record, seeking a more tangible, classic embodiment of the sound than a more contemporary MP3 file can offer, Colagiovanni says. It's available in a limited edition of 100.

Newer exhibits, such as "White Gold," feature Haviland extending her performance to serving as a hostess who screen prints teacups with sugar onto buttercream-frosted cookies. She plans to work more in sugar crystals as an art medium in the future. In the meantime, she's working with Colagiovanni to complete "Dinner Music," the longer film shot during a hot North Carolina summer last year.

Haviland hopes the various works will stimulate conversation about gender roles and conventions. She enjoys watching the reactions to her pieces, noting that the responses often fall along generational, class, and geographic lines. Women over 50 seem most protective of the fine china and its meanings, whereas younger women or those from middle-class backgrounds may have an ambivalence or negative view of the objects. Females from the South have shown the strongest reaction to Haviland's breaches of etiquette at the shows. One woman followed her around an installation, painstakingly turning dozens of knives "the right way" on the table setting, Haviland recalls.

"I'm always interested in the stories that come out," she says.

While Haviland and Colagiovanni don't hesitate to break fine china, they are also respectful of it, and take care not to waste it. Along the wall of the video editing room are shelves full of broken teacups and saucers that have been carefully patched back together. Although the jagged lines of wear and breakage show, these delicate pieces are whole again here.

"Maybe," Haviland says, admiring their restoration work, "it shows that we can't quite let go of these objects either." 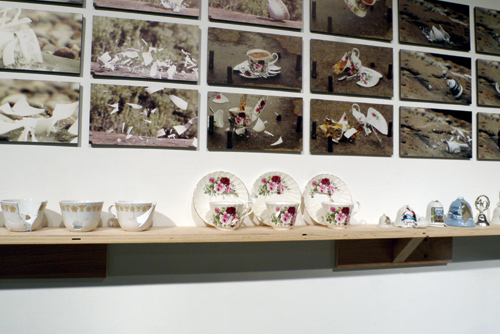 "To Rend and to Mend" by Haviland and Colagiovanni includes stills from the films, as well as fine china pieces. Image courtesy of the artists.

This article appears in the Spring/Summer 2013 issue of Perspectives magazine, which covers Ohio University research, scholarship and creative activity.