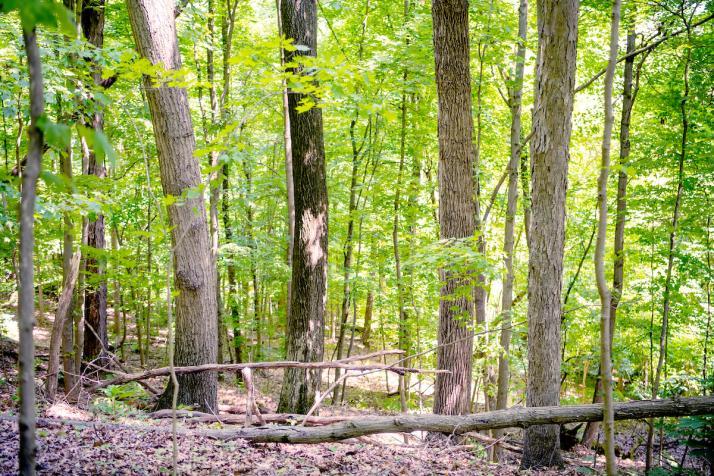 A recent Ohio University study offers new information about how changes in the nutrient composition of the soil in forests could be leading to a rise in the maple tree population while suppressing the growth of oaks.

The research has implications for forest management practices, as oak is a valuable source of timber and supports a diverse ecosystem of plants, insects and animals.

“We know that over the last 30 years, the eastern deciduous forests that were once dominated by oak have been transitioning to maples,” said Jared DeForest, an associate professor in the Department of Environmental and Plant Biology at Ohio University and co-author of the study, which was published Feb. 17 in the journal New Phytologist.

The scientific community has searched for an explanation, such as whether an increase in nitrogen in the soil — introduced through acid rain — could be a factor, he noted.

DeForest launched an experiment in 2009 designed to simulate the impact of changing the soil nutrient composition on tree growth. Using three plots of land in southeastern Ohio — in young, middle and older age soils — scientists applied lime that elevated the pH levels (acidity) of the soil and/or added phosphate fertilizer. This created an inorganic nutrient soil system that would be similar to soil found in areas impacted by acid rain or farming, he explained.

Over the course of seven growing seasons, the team took measurements of approximately 1,600 trees and studied soil samples in the lab.

The research also showed that nitrogen is not the sole nutrient impacting soil health, but that a more complex system of nutrients is at work.

“If we focus on one element, we might be missing the bigger picture. This research is more holistic,” DeForest said, adding that the researchers plan to take a closer look at the nutrient system in future studies.

The switch from oaks to maples in eastern deciduous forests has major implications for the diversity of the wildlife ecosystem as well as forest management strategies, the scientists noted.

Forests dominated by oaks support a more diverse ecosystem of plants, insects, reptiles and mammals, said Snell, an assistant professor in the Department of Environmental and Plant Biology at Ohio University. Oaks produce acorns for more than 90 different species of vertebrates. And while maple trees release seeds, they are smaller and are produced earlier in the season when animals are less active. Oaks produce acorns later in the year “at a more critical time for wildlife,” Snell explained.

Forest managers use controlled burns to maintain ecosystem diversity, but burns in areas impacted by acid rain could create a more inorganic soil system that could promote maples, DeForest noted. The Ohio University study could help provide direction on where forest managers might have the best opportunity to bring oaks back.

“Oak regeneration is a complicated issue. But if we understand how these underlying, easy-to-measure soil variables affect oak recruitment and plant growth, we can then provide guidance on which sites you should focus on for white oak regeneration projects,” DeForest said.

The study received funding from the National Science Foundation. The Ohio Department of Natural Resources Division of Wildlife and Division of Forestry provided access to field sites.