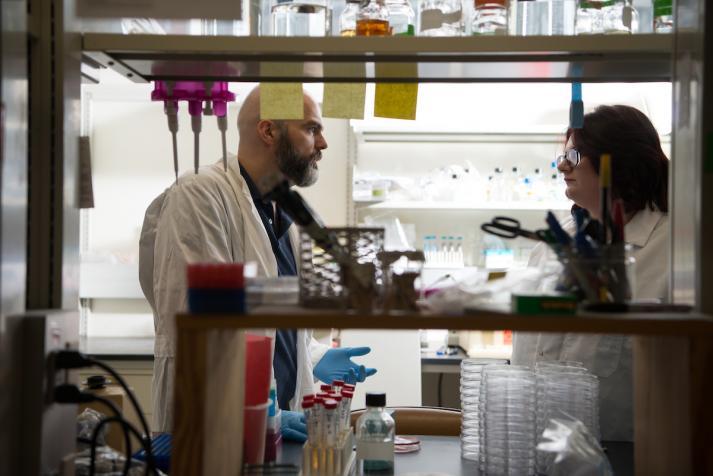 Ohio University microbiologist Ronan Carroll was awarded a $2.1 million grant from the National Institutes of Health this fall to study how scientists can combat a common bacterial infection that is becoming resistant to antibiotics.

The funding builds on the discovery by Carroll and a team of Ohio University student scientists—including five undergraduates—who identified an RNA molecule, Teg41, that plays an important role in making methicillin-resistant Staphylococcus aureus (MRSA) so toxic.

About 20,000 people died from S. aureus bloodstream infections in 2017, according to the Centers for Disease Control and Prevention. Although S. aureus infections are typically acquired by individuals with suppressed immune systems in hospitals, scientists have documented a rise in the bacterial infections among healthy people over the last decade, explained Carroll, an assistant professor of biological sciences. Even more troubling: Bacteria such as S. aureus are becoming resistant to conventional antibiotics on the market.

MRSA, an antibiotic resistant form of S. aureus, has a “Swiss army knife” approach to creating bacterial infections, Carroll said. “It’s a very tricky bug to work on, because there are so many different toxins it uses,” he explained.

Although microbiologists have studied how DNA uses RNA as a tool to make protein toxins (that allow the bacteria to cause infections), Carroll felt that not enough research had been conducted on the variety of ways in which RNA molecules are involved in the process. The OHIO scientist suspected that it wasn’t just “an intermediary that shuffles information.”

The students conducted a variety of tests to explore the functions and actions of these mystery molecules. One experiment pointed to Teg41. As the students made more of this RNA, it created more of the toxins that could destroy red blood cells. “We knew we were on to something,” Carroll recalled.

The OHIO team published their findings in an academic journal, and Carroll used the data for a proposal to the National Institutes of Health to support further research in the lab on Teg41. The grant will support the hiring of a postdoctoral researcher and will fund a research technician and graduate students who will work with Carroll’s newest team of undergraduate scientists.

The five undergraduates instrumental in the RNA study have graduated and are pursuing careers in the biomedical field—landing Fulbright scholarships, working in biotechnology labs and attending graduate and medical schools.

Kellie King, now a second-year doctoral student in the biomedical and veterinary sciences program of Virginia Tech, said she gained critical skills and scientific knowledge as an undergraduate in the Carroll lab. She benefited from working directly with Carroll as well as his graduate students, “which opened my eyes to what graduate school entailed,” she noted. In addition, King had the opportunity to communicate the results of her research to scientists at various professional conferences.

“I became very passionate about research and ultimately wrote my senior thesis while in the lab,” King said. “This experience prepared me for graduate school: Not only do I have the set of skills, but also the confidence and excitement from researching with Dr. Carroll to want to continue learning and furthering my education.”

Carroll typically recruits first- or second-year biological sciences students so they can work in the lab for a few years before graduation. He teaches students basic lab skills and safety, as well as how to avoid and recover from mistakes in experiments. Carroll believes in giving students their own pieces of the research project to manage to better learn and understand how their work can fit into the larger context of scientific discovery.

Carroll has hit on a winning formula of working with undergraduate scientists: He has a waiting list of students seeking to conduct research with him, and his lab has an almost 100 percent track record of moving students further into the biomedical field. And while they’re at Ohio University, Carroll’s undergraduates often show up on the list of awards recipients for funding programs such as the Provost’s Undergraduate Research Fund and John J. Kopchick Awards, as well as the top prizes at the annual Student Research and Creative Activity Expo.