Healthy Aging: Researchers explore the science of longevity and wellness 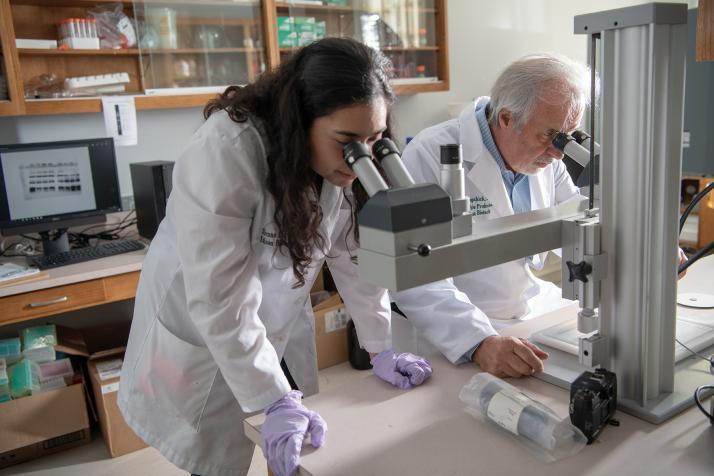 Scientists, policymakers, public health experts, and senior citizen advocates worldwide are concerned about wellness among a rapidly aging population. We may be living longer, but we spend more of those later years saddled with disease and debilitation, notes Ohio University Distinguished Professor John Kopchick.

Kopchick and his team of researchers at Ohio University’s Edison Biotechnology Institute and Heritage College of Osteopathic Medicine have been exploring biological mechanisms that could help people age in good health. The scientist, who has a successful background in drug development, is determined to build on his lab’s decades of scientific research on growth hormone, cancer, diabetes, and aging to find a new therapy that could be a game changer for the golden years.

Kopchick came to aging research on an unexpected path: The scientist is internationally known for discovering how to block growth hormone action in the body. The 1987 breakthrough led to the development of the Pfizer drug SOMAVERT®, which is designed to treat adults with acromegaly, a form of gigantism that can pose serious health problems.

To study the role and action of growth hormone, Kopchick and his team of scientists work with genetically modified laboratory mice that lack normal growth hormone receptors. The animals are, as one might expect, smaller than the average mouse. But the researchers were surprised to discover that the mice had other unique aspects to their biology.

“These animals were very obese but didn’t get diabetes,” says Kopchick, the Goll-Ohio Professor of Molecular Biology in the Heritage College of Osteopathic Medicine. “As we continued, we also found that they were very resistant to cancers.”

The scientists were just as amazed to realize that these mice were reaching 3 ½ years of age or more. The average mouse typically lives to be 2 ½ years old, Kopchick explains.

“We found that they lived longer whether they were male or female,” he adds, and continued to show few signs of disease.

The Kopchick lab began a series of studies on these mice to understand the mechanisms behind the animals’ unusual biology—and the possible implications for human health. Kopchick sent the mice to fellow researchers in more than 15 countries so that other labs could examine these remarkable models of long, healthy lives.

To promote research on aging, the scientific journal Nature created a Methuselah prize for the rodent with the greatest longevity. The Ohio University mouse nabbed the first award—and years later still holds the record. This dwarf mouse died just short of its 5th birthday. “We have the longest-lived laboratory mouse,” Kopchick says.

Medical researchers often study the mechanisms of and possible therapies for disorders in laboratory mice before applying such findings to human subjects. But scientists already have seen how growth hormone can be a factor in disease prevalence by looking at a small population of people with Laron syndrome. These individuals lack growth hormone activity due to a genetic mutation. Like Kopchick’s mice, they are dwarf and obese—but they also don’t get cancer or diabetes. In 2011, Kopchick co-edited a book on what scientists had learned about Laron syndrome from mice and human studies with Dr. Zvi Laron, the namesake of the medical condition and an internationally recognized leader in pediatric endocrinology. The next year, a French documentary film titled “Secrets to a Long Life” further raised the issue’s profile in the scientific community.

In 2013, Kopchick’s longevity research landed him an invitation to a meeting of 50 of the world’s experts on aging in Italy. The scientists identified the six most promising interventions for healthy aging, which included both dietary and drug treatments. Pharmacological inhibition of growth hormone was at the top of the list. The team published their analysis of these strategies in the journal Aging Cell in 2015.

While scientists study the effectiveness of these proposed interventions, Kopchick notes that entities such as the U.S. Food and Drug Administration will need to make a “paradigm shift” in how they view pharmaceutical treatments for elderly populations in order for such strategies to gain acceptance.

“Are we ready to start treating normal, older individuals with medications if they’re not sick—just old?” Kopchick says of the central question the scientists discussed.

Over the last decade, the Kopchick team has continued to research the role of growth hormone in longevity, with a renewed focus on the potential impact of specific pharmaceutical interventions during old age. Earlier studies examined the health and longevity of mice that had been born with growth hormone inhibited. In 2016, Kopchick’s team published findings in the journal Endocrinology that showed that lab animals with growth hormone disrupted at a later age, six weeks, also avoided disease, with the females in particular achieving longer lifespans than mice in the control group. The findings attracted attention in the research community, Kopchick recalls.

Last year, Kopchick and co-investigators Darlene Berryman and Edward List at the Edison Biotechnology Institute and Heritage College of Osteopathic Medicine landed a $2.2 million grant from the National Institutes of Health to advance this work, examining the impacts of growth hormone inhibition at an even later age—six months (an age equivalent to early adulthood for humans)—in normal mice. In addition, the scientists are studying the impact of treating the mice with rapamycin, which has been shown in other research to demonstrate anti-aging effects.

Berryman, an Ohio University professor of biomedical sciences, explains that the scientists are interested in learning whether a new combination of therapeutic approaches could be effective in the human population. The other key question is at what point in life such treatments can start in order for seniors to reap the rewards. “What’s the window in time in which we can make the most impact, from a clinical perspective?” she asks.

Not only is the aging population growing, but the incidence of obesity, diabetes, cancer, and other such diseases are rising in tandem, notes Berryman, who also serves as the associate dean for research and innovation in the university’s Heritage College of Osteopathic Medicine. “If we can impede that progress, at least for a few of (these diseases), we can improve the quality of life for a lot of people,” she says.

Shiyong Wu, Edison Biotechnology Institute director and a professor of chemistry and biochemistry, notes that Kopchick’s focus on the role of growth hormone in healthy aging offers synergies with other research initiatives at the institute. In the last few years, Kopchick, Wu, and institute principal investigator Dhiraj Vattem, a professor of nutrition in the College of Health Sciences and Professions, have been exploring how natural products could mitigate diseases that become more prevalent with age, including cancer and neurodegenerative disorders such as Alzheimer’s.

As for the development and commercialization of a drug that can promote healthy aging, Kopchick notes that it must be inexpensive, taken orally, and have no side effects in order for it to be broadly used. The team already is drafting plans for the next phase of the research that they can pursue after the current National Institutes of Health grant is complete; they expect to be busy for years to come.

“(John Kopchick) is a naturally curious and scholarly person. That’s not waning—it’s getting more intense,” Berryman says. “And that’s why he’ll continue to get grants and make discoveries that will make a difference in people’s lives.”