Illustrator’s “Fear Project” gives voice to what scares us 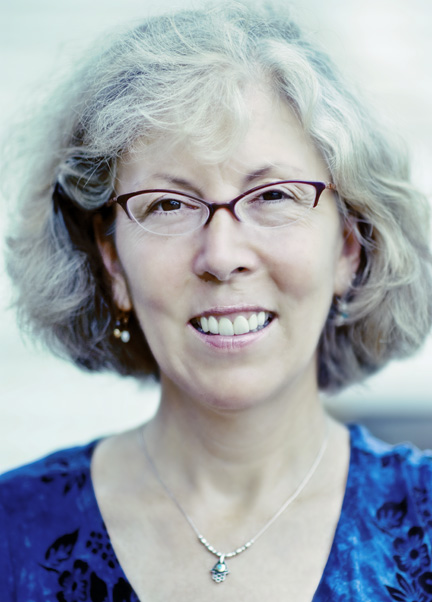 Sitting down to write this, I feared the blank page. Would I type something compelling and worthy of your attention, or create an ink and paper cure for your insomnia?

Maybe it's not the white digital blankness of a computer screen that scares you. Perhaps it's whether you'll develop throat cancer, get stung by a raging swarm of bees, be arrested by the State Highway Patrol, or, when you're lying on your death bed, realize—too late—that you lived a life without purpose.

Julie M. Elman has heard it all. As author of the Fear Project, the illustrator has solicited or received hundreds of tales of anxiety, worry, and unease. She's taken those concerns—captured voices on an iPhone, digital missives in an email—and brought them to life through a series of mixed media pieces. The works have been exhibited in art galleries, featured on National Public Radio's The Picture Show blog, and reside on fear-project.com, where they attract hundreds of viewers from across the planet.

"The project is resonating loud and clear. People connect with the work and feel compelled to tell me that," says Elman, an associate professor of visual communication at Ohio University.

Elman's drawings can be whimsical, pensive, frightening, or even hopeful. Using colored pencils, pen, a water-based paint called gouache, as well as materials such as paper, string, and felt, the illustrator creates a visual depiction of the expressed fear. Ivory sheep dance across a royal blue and sparkling gold night sky as a young woman struggles with crushing sleeplessness. Thin, mournful bodies of wrongfully imprisoned men, painted russet orange, echo the lines of the stark black bars that trap them. Centipedes with angry, fuchsia pinchers spin out of a bathroom shower head and kidnap the happy, yellow rubber ducks riding on a sea of lavender and pale green waves.

Viewers of the Fear Project pieces respond to both the aesthetics of these often beautiful and arresting images and the cathartic experience of confronting—and perhaps, diminishing—the anxieties depicted, Elman says. People who have shared medical fears, for example, later told the illustrator that having the worry visualized on paper helped them get through a stressful hospital procedure or illness.

For some viewers, the project validates what might have been considered an unusual concern. You're not the only one who dreads the cloying scent of bananas, the sight of lotus seed pods, or the possibility of emitting a sonorous belch while public speaking. 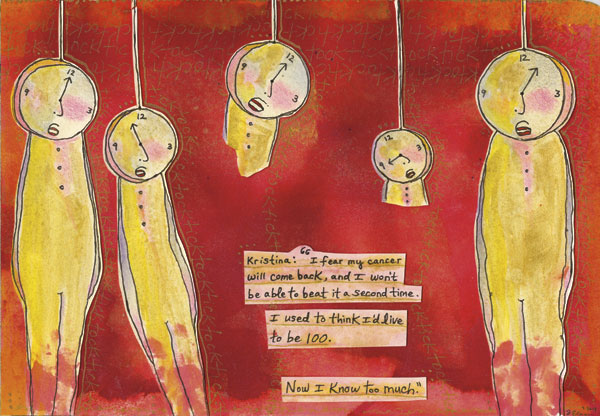 "The fears are pretty varied," Elman notes. "After the NPR story appeared, I started receiving more fears about the purpose of life and loneliness. But people often express those ideas in different ways."

Although the illustrator began the project by interviewing family members, friends, and colleagues about their anxieties, dozens of perfect strangers now message her with stories of their deep disquiet or phobias. She respects any requests for anonymity.

And while she's humbled by the fact that so many people seem eager and ready to share their most fundamental concerns, she is quick to point out that she's not a therapist.

In fact, the Fear Project started out as a creative exercise for the former photojournalist and newspaper designer. Her current role teaching publication design frequently finds her seated behind an illuminated computer screen.

At first, Elman needed to doodle with pen, paper, and ink. Inspired by Oregon artist Kate Bingaman-Burt, she decided to bring structure to her creative process by setting simple rules for herself. After deciding to draw fears—using her background in journalism to reach out to others, instead of only rehashing her own apprehensions—she chose a routine: Work on the pieces fast, never re-do them, and post them online promptly for public consumption. 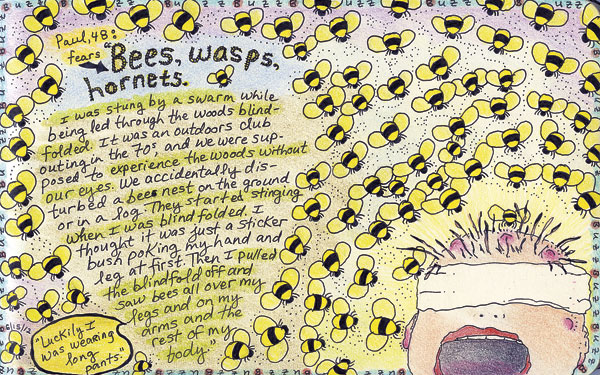 "I don't labor over these pieces. Usually I take one afternoon or night. It helps me not think about it too much so that my inner critic doesn't come out and start to question whether people will hate it or find that it doesn't communicate the fear very well," she says. "I plow through it, post it, move on to the next one."

The images resonate with a wide variety of audiences. Other artists may take note of the techniques, the materials. English professors and those who work with at-risk juveniles have responded to this form of journaling to express emotion and tell stories. Professionals in the mental health and health care industry have pointed out the healing aspects of visualizing anguish.

What everyone agrees on, Elman says, is that they can't wait for the Fear Project book. The illustrator is now seeking a publisher for the series.

And if she ever gets a little anxious about the prospect of finding one? She knows a good outlet for her worries.

View the original article (with additional Elman images) in Ohio University's Perspectives magazine or at the Fear Project site.

This article appears in the Autumn/Winter 2013 issue of Ohio University's Perspectives magazine.