Earth Works: Artist John Sabraw makes a case for sustainable art in a new series of paintings that celebrate the natural world

If you want to get into John Sabraw's brain to understand the origins of Chroma, his new series of paintings inspired by the environment, the artist provides one piece that offers 625 visual clues.

On corkboard harvested from Portugal, Sabraw carefully has created a vast grid of small, vibrant images. Mounted on the wall in the center of Chroma, this piece, Unified Theory, makes some startling connections. Bacteria bubbling in pools at Yellowstone National Park bear a striking resemblance to clouds of interstellar dust and gas in deep space. Other photos, often shot by Sabraw himself, point out similar synergies between natural phenomena and manmade structures in the landscape around him.

When visitors to Chroma laid eyes on Unified Theory at the show's opening in Chicago, "they would make a beeline over to me. They get it. They get it instantly," says Sabraw, an associate professor of art at Ohio University. "Everyone has their own system of making sense of these things." 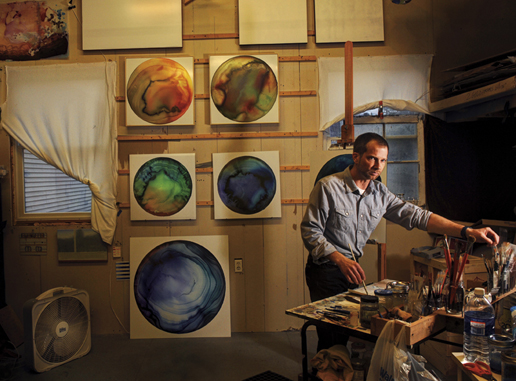 To create the pieces in the Chroma series, Sabraw uses different paint viscosities and types of pigments, and allows these layers to naturally interact with the temperature, humidity, and other elements of his home studio. (Photo by Robb DeCamp)

Sabraw's method of making sense of the glory and beauty of the natural patterns of our world is reflected in Chroma, a collection of bold circles of life saturated in kaleidoscopic colors. The titles of the works suggest the inspiration for each piece.  Tidal Pool is a rich sphere of blues and greens, and the pieces called Karst echo the rugged lines of limestone and minerals found underground. Each piece features from six to 24 layers of paint slowly applied over the course of several weeks in the studio, and each layer invites the viewer to infer another shade of meaning from the images: Is the circle a slice of earthen jasper, a flaring gamma ray in the night sky, a swatch of algae, a single cell of energy pulsing in the body?

We exist somewhere between the micro and the macro images here, Sabraw says, noting that Chroma aspires to capture our dynamic involvement with a complex natural system.

"It's a beautiful, wonderful blessing; it brings endless joy to know that you are a component of this grand mystery," he says.

If Sabraw could sum up his concept in one word, though, it probably would be "sustainability."

The artist knows it's a loaded word.

"Sustainability has become this kind of negative obligation," he admits. "There's a perception, particularly here in the United States, that this is foisted upon you and you have to do something about it, but it's like paying taxes. There's a benefit somewhere, but we don't see it, and we suspect that some people are getting off Scott free."

Sabraw, however, is passionate about creating sustainable artwork. Instead of painting on canvas, for example, he uses two thin sheets of aluminum composite panel sandwiched around a plastic core. The material is primarily used in commercial signage and is very durable and flexible. It's a "conservationist's dream," Sabraw notes in his artist's statement, as it's made to withstand exterior conditions and won't corrode or crack. The frames are bamboo that's been organically grown, sustainably harvested, and formaldehyde free, with layers of water-based clear coat. These lightweight pieces help save on shipping fuel costs.

Sabraw uses water-based paints, dry pigments, and other dry media. In the fall, he and Guy Riefler, an associate professor of civil engineering, successfully produced small quantities of an artist-grade acrylic and oil paint from a novel source: the iron runoff from the region's old coal mines.  Rain washes the heavy metals out of the mines, and the discharge collects in streams. Environmental scientists have worked for years to clean up these waterways, which are too acidic for wildlife to thrive.

"The dream of a useful paint made from mine runoff remediation, whose sales can offset the cost of remediation, is one step closer to realization," the artist says.

To create the pieces in the ongoing Chroma series, Sabraw uses different paint viscosities and types of pigments, and allows these layers to naturally interact with the temperature, humidity, and other elements of his home studio (where he chooses not to use air conditioning for environmental reasons). Sabraw may layer various coats of paints over the course of several days or even months, watching to see how the colors and materials respond, before he decides the painting is complete.

"You have to give yourself over to being in the process itself," he says. "If you have an ideal image in mind, you're going to be frustrated."

On his companion website, the Green World Art Project, Sabraw explains how he not only uses sustainable materials, but also lives green by relying on only natural or CFL lights, turning off electronics that aren't in use, installing water-efficiency devices, walking instead of driving, recycling items for the studio, and using a programmable thermostat.

Whatever Sabraw can't make sustainable, he makes carbon neutral. That's a concept by which an individual can purchase "carbon credits" to offset the environmental damage caused by activities that produce carbon dioxide, such as using electricity or traveling by car or air. The credits fund projects such as planting trees or clean energy initiatives that reduce greenhouse gases in the atmosphere.

As part of the Green World Art Project, Sabraw studied the methods used by Leonardo DaVinci, such as the types of materials and pigments in his paint and the mining efforts and horse-drawn vehicles that obtained them, to create the Mona Lisa. He determined that he needed to purchase $35.50 in carbon credits to offset the estimated 3.55 metric tons of carbon dioxide generated in the production of this famous work.

Other artists aren't always so amused by these meditations on green art, Sabraw admits.

"I have gotten some heated responses from those who think I am judging them," he says," but I am not passing judgment."

He's only trying to raise awareness, he argues, that artists can do more to make sustainable art, and that there should be more dialogue in our culture about the issue.

It's an argument that goes over better with the Ohio University students Sabraw teaches in art courses often focused on sustainability, science, and the environment. In 2009, Sabraw's students built a "sustainability sprout" in a conspicuous spot in the student union, where the university community was invited to write a pledge to the environment on paper leaves they could attach to the 6-foot metal plant sculpture.

While older generations may scoff at the difficulty of making positive impacts on the environment, students ask "What we can we do today?" Sabraw notes. "If experts can't answer that question, the students feel let down."

Lauren Purje, a New York City artist and 2009 School of Art alumna, says that Sabraw's classes raised her awareness of sustainability issues. She acknowledges that environmental themes have crept into her recent work: a series on natural disasters that allude to pollution, as well as a painting that ponders recent mass deaths of animals in nature. Purje also admires Sabraw's commitment to carbon-neutral art, including his quest to avoid creating waste in the studio.

Sabraw not only celebrates science and the environment in his art, but works in a scientific manner as well, Purje adds.

"He sets up his paintings like an experiment—he's not sure what will happen," she says. "He taught me that you shouldn't be afraid to fail."

The connection is no coincidence, as Sabraw's art stems from a longtime love of science and nature. He created his early work at Ohio University from the "perspective of a romantic activist: finding beauty in the Earth and environs, but doing anything I could to change things for the better," he recalls.

A collaboration with university astrophysicists Tom Statler and Mangala Sharma on two projects, Scale and Planet Panorama, both designed give the general public an appreciation of the size of the universe, opened his eyes to how much humans are interconnected to each other, as well as to the environment.

"This instilled a more focused sense of responsibility for our fragile existence," he says. "It became clear to me that sustainability was the most egalitarian avenue for broadly effective improvement for all of us."

His research for Scale introduced him to other related areas of scientific study "that collectively led to my thought process that gave birth to Chroma and in some measure restored my romantic ideals as well," he says.

Chroma's allusions to the natural phenomena on Earth now have sparked discussions with scholars in the life sciences, including plant biologists who study algae, as well as astronomers at planetariums. Sabraw thrives on making these connections between art, science, engineering, activism, and the environment. It's his Unified Theory come to life.

This article appears in the Spring/Summer 2012 issue of Ohio University's Perspectives magazine.

Contact Sabraw at sabraw@ohio.edu. Watch an interview with Sabraw about this project.