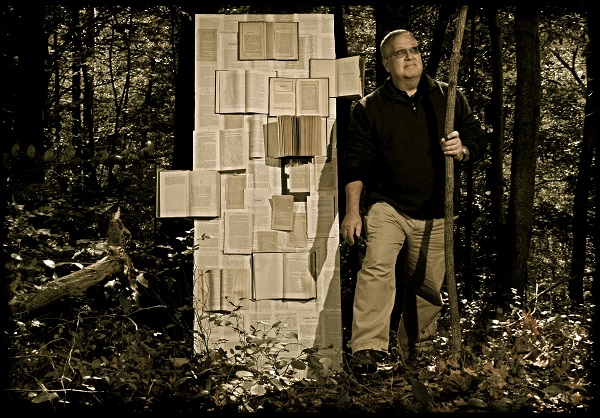 To get a quick sense of who Dinty W. Moore is and where he is on the planet, take a deep breath and read from his self-styled online bio: "Dinty lives in Athens, Ohio, thefunkadelicious, hillbilly-hippie Appalachian epicenter of the locally-grown, locally-consumed, goats-are-for-cheese, paw-paws-are-for-eatin', artisanal-salsa, our-farmers-market-rocks-the-hills sub-culture, where he grows his own heirloom tomatoes and edible dandelions, and teaches a crop of brilliant undergraduate and stunningly talented graduate students as director of Ohio University's BA, MA, and PhD in Creative Writing program."

It's immediately apparent that Moore likes what he's doing and where he's living. It's also clear that he loves the English language—its rhythms and sounds and willingness to serve. For Moore, language is the world's biggest playpen. He has written and published books of short stories and personal essays, books on the art and craft of writing, and, most recently, a text on writing flash nonfiction, The Rose Metal Press Field Guide to Writing Flash Nonfiction, which merited an Honorable Mention by the American Library Association at the Foreword Book of the Year Awards in June.

An Essay in a Flash

Though the term "flash nonfiction" is fairly recent, Moore says, the brief form of nonfiction in this country is nothing new.

"You could argue that Benjamin Franklin was the first brief literary essayist on American soil, if you count the concise entries on weather and astrological events and the advice on etiquette—'Fish and visitors stink in three days'—which he inserted into his Poor Richard's Almanack, an annual publication he started in 1733," Moore says. He adds that the 1800s were full of brief prose, thanks to the proliferation of newspapers and magazines, and rapidly advancing printing technologies.

In tracing the lineage of the brief essay in this country, Moore tags Washington Irving, Henry David Thoreau (the stand-alone chapters from Walden), Mark Twain (one problem being that he freely mixed fact with fiction), Robert Benchley, Dorothy Parker, James Thurber, S.J. Perelman, and E.B. White as practitioners of the short form. But it wasn't until the latter half of the 20th century that the short form came into its own.

"The energy and activity that coalesced around the brief fiction genre led to the publication of several anthologies of short fiction and also attempted to give the work a proper name," Moore explains. "The term 'shorts' has been used, but 'flash' became the most widely used term and remains the standard to this day.The author, through language, is trying for a burst of self-awareness that the term flash implies; the compact prose illuminates like a flash gun."

In the closing years of the 20th century, Moore says, the popularity of flash fiction led to an interest in flash nonfiction, and this genre particularly excited Moore. "These early anthologized mini-essays topped out at 2,000 words, and I thought, 'How interesting—what can I say about my life that can be crystallized in this short format?'"

Moore can define the elements of the brief essay form—it is sharply focused, ambitious, intimate, and demands concentrated attention—but he prefers to describe the form with a metaphor.

"In an essay of conventional length, if there's a fire burning deep in the forest, the reader might begin at the forest's edge and be taken on a hike, perhaps a meandering stroll, into these woods, in search of that fire. In a brief essay, however, the reader is a smoke jumper, one of those brave firefighters who jump out of planes and land 30 yards from the fire. The brief essay, in other words, needs to be hot from the first sentence, and the heat must remain the entire time."

His interest in the short form led Moore to found the online magazine titled Brevity: A Journal of Concise Literary Nonfiction.

"My patience for reading prose on the Web stops after a couple of screens, so I came up with the 750-word limit for a Brevity piece. The advent of blogs, Facebook, Tumblrs, and Twitter seems to validate the idea that shorter chunks of prose are more enticing to users of these new technologies," Moore says. When he launched the magazine, he didn't have great expectations for its longevity. Moore imagined it might not last more than a few issues.

"Brevity has grown beyond my wildest dreams in its 16 years of existence," he says, "and judging from the ever-multiplying numbers of submissions and the geographic locales of those who submit, the flash nonfiction movement has flourished in tandem with our online magazine."

Though still committed to publishing new writers, the magazine has enjoyed an embarrassment of recent riches, he adds, including the work of two Pulitzer Prize finalists, numerous National Endowment for the Arts fellows, Pushcart Prize winners, and authors from India, Egypt, Ireland, Spain, Malaysia, and Japan. Brevity averages 10,000 visitors a month and has a mailing list of 5,000.

Although Moore has made a name for himself in the flash nonfiction genre, his own published writing also includes conventional essays, memoir, short stories, and writing guides for fellow scribes.

"The majority of my work is still longer than the 'flash' limit, though I remain drawn to the brief form," Moore notes, adding that he finds the brief essay form maddeningly difficult. "It takes great effort to craft the tiny Faberge egg that a flash essay must contain, and I may be a better editor of this specialized form than I am a writer of it. 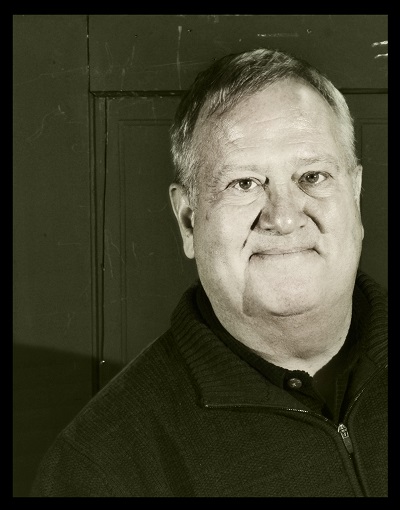 "I think, and hope, that all of my writing, including longer essays and my books, has been influenced by my experience editing and writing in the flash form," he continues. "I certainly pay more attention to compression and concision—saying something once, saying it precisely, and saying it with color and image. I am also keenly aware of the need to pack so much into the first sentence, so the reader has multiple handholds to pull her forward."

Moore has been thinking of his readers ever since his early writing efforts in the first grade.

"I was writing funny little things and showing them to my classmates and my teacher, and getting positive reactions, and in this way distinguished myself," he recalls. "But as the years went by I thought that if you wanted to be a serious writer you had to be from New England, go to Harvard, and be somehow connected to this other elevated world. But my dad was a car mechanic, and we lived a lower working-class life; so I convinced myself the only way I could be a writer was to work on a newspaper."

As a student, Moore served as editor of the campus newspaper at the University of Pittsburgh and knew he was a good journalist, but longed to be more self-expressive and artistic. He began to hang out with painters, and though he discovered he didn't have any talent for painting, he fell in love with the artistic process. In the next six years, "pouncing around from thing to thing," he failed, he says, as a wire-service journalist, modern dancer, zookeeper, Greenwich Village waiter, and filmmaker.

"But I knew I wanted to make art," Moore says. "So at age 28 I had this forehead-slapping moment where I realized writers can be artists too, and writing had been the only thing I'd been very good at."

Creative writing is Moore's true calling, but the actual process of developing a piece is challenging and "very messy," he notes.

"I get an idea and scrawl down a few things, push those sentences around and try to get them to cohere. By then I might have an idea whether I'm going to flesh out this idea as a conventional essay, experimental essay, or illustrate it with Google maps" (as he does in the illustrated essay that stars him and American journalist, writer, editor, and actor George Plimpton). "You keep pushing the clay around until it forms into something you recognize."

Moore explains that he typically scribbles notes on an index card or scrap of paper, but moves fairly quickly to the computer. And he's a big believer in writing "lousy first drafts."There are two advantages to this approach, he says—a writer doesn't pressure himself "right out of the chute" to be brilliant, and if he is simply spewing out words and memories and not trying to make much sense of them, there's more possibility to surprise himself on the page.

Moore also believes that the most fruitful events or moments to write about are those that continue to confuse us. He stresses the importance for him of writing to understand the difficult questions, to explore who and what were the primary movers and shapers of his past.

"I'm the product of an alcoholic father and depressed mother, and so have explored in several essays how my development was influenced by my parents, but also how much was the result of political and cultural circumstances of the time: the Vietnam War, protests, Watergate, paranoia around Nixon and government. And I can't discount the influence of TV shows. I ended up spending as much time watching Dick Van Dyke as talking with my father. How did those sit-com patterns settle into my brain and influence my behavior even now?"

Moore adds that his study of the principles of Buddhism for more than three decades also figures into to the writing process, beginning with what he calls simple mindfulness.

"In the context of writing, mindfulness means that at those moments when you are focusing on an elusive line of poetry or a stubborn plot obstacle in a story, you are able to remain attentive to the task at hand, seeing the words that are before you, hearing the possibilities in your mind, not succumbing to the thousands of other willing and ready distractions," Moore writes in The Mindful Writer: Noble Truths of the Writing Life, which was published in 2012. This book is a rough sequel, he says, to his book The Accidental Buddhist, from 1999.

Moore says that although he enjoys the process of writing, it really doesn't get any easier.He believes the real writing gets done in the rewriting, and a typical finished essay of his goes through anywhere from 18 to 24 drafts.

"It takes me a long time to figure out what a piece is going to be about, what's really interesting. And from draft to draft I clean up rhythm and sound and the timing of the prose," he says. When he can read a whole draft aloud without stumbling over weak metaphors, clumsy sentences, or inadequate descriptions, then he knows the piece is finished.

Moore has clearly succeeded in several short-form genres, but has he ever considered writing his Great American Novel?

"I've already done that, written three novels actually," he says, adding that he's published none of them. "In grad school I thought I was going to be novelist, but it turns out I've had much more success with the short story, which somehow segued into writing and publishing the essay, the nonfiction version of a short story. At this point, I think I've found my genre."

This article will appear in the Autumn/Winter 2013 issue of Ohio University's Perspectives magazine.