ATHENS, Ohio — Fossils of an ancient crocodile with mammal-like teeth have been discovered in the Rukwa Rift Basin of Tanzania, scientists report in this week’s issue of the journal Nature. The unusual creature is changing the picture of animal life at 100 million years ago in what is now sub-Saharan Africa.

“If you only looked at the teeth, you wouldn’t think this was a crocodile. You would wonder what kind of strange mammal or mammal-like reptile it is,” said study lead author Patrick O’Connor, associate professor of anatomy in the Ohio University College of Osteopathic Medicine.

The scientists describe the new species of notosuchian crocodyliform as a small animal—“its head would fit in the palm of your hand,” O’Connor said—that wasn’t as heavily armored as other crocodiles, except along the tail. Other aspects of its anatomy suggest it was a land-dwelling creature that likely feasted on insects and other small animals to survive. 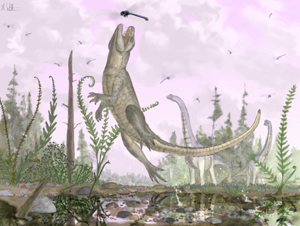 Based on other fossils discovered as part of the Rukwa Rift Basin Project, Pakasuchus lived alongside large, plant-eating sauropod and predatory theropod dinosaurs, other types of crocodiles, turtles and various kinds of fishes. Illustration credit: Mark Witton, University of Portsmouth.

O’Connor and his international research team, funded by the U.S. National Science Foundation and the National Geographic Society, found a complete specimen of the crocodile in 2008, and now have recovered portions of seven different individuals in southwestern Tanzania. The tooth row with molar-like teeth initially puzzled many experts. Other ancient and living crocodiles typically boast relatively simple, conical teeth that serve to seize and tear prey; they swallow flesh in large chunks.

The molar teeth of the new species, named Pakasuchus (Paka is the Ki-Swahili name for cat and souchos is Greek for crocodile), possessed shearing edges for processing food, similar in form to the teeth of some mammalian carnivores.

“Once we were able to get a close look at the teeth, we knew we had something new and very exciting,” O’Connor said. 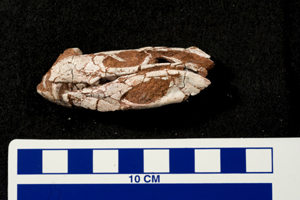 This ancient crocodile was about the size of a modern domestic cat -- "its head would fit in the palm of your hand," O'Connor said. Photo courtesy of Patrick O'Connor.

The research team’s discovery that the animals had heavily plated tails but relatively unarmored bodies with gracile limbs suggests that the creatures were quite mobile. They probably actively foraged on land, unlike water-dwelling crocodiles.

The new species isn’t a close relative of modern crocodilians, but is a member of a very successful side branch of the crocodyliform lineage that lived during the Mesozoic Era, O’Connor said.

While the specimens of the newly discovered animal and its close relatives are unusual, the study suggests that the creatures were abundant during the middle Cretaceous, from around 110 million until 80 million years ago.

“The more exploration we do, the more we push the boundaries on what we thought we knew about animal life on the planet,” O’Connor noted. 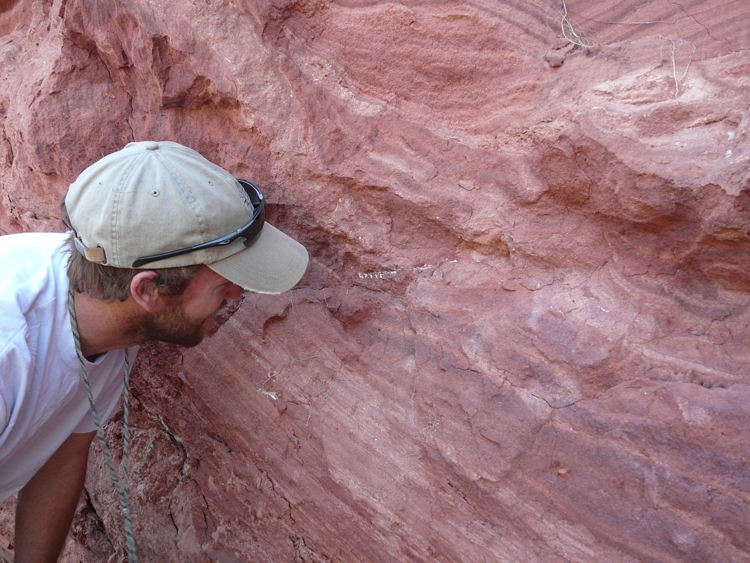 Based on other fossils discovered as part of the Rukwa Rift Basin Project, Pakasuchus lived alongside large, plant-eating sauropod and predatory theropod dinosaurs, other types of crocodiles, turtles and various kinds of fishes.

“We suspect that notosuchians were very successful in the southern hemisphere because they were exploiting a certain ecological niche, one in which they were able to successfully compete with other small-bodied, terrestrial animals,” O’Connor said. “This is an environment that was quite different from what we typically think of for crocodiles.”

Little is known about the vegetation during this time period, but detailed sedimentological analysis of the Rukwa Rift Basin shows that “the landscape was dominated by a large, long-lived river system with multiple, crisscrossing channels and low-relief vegetated floodplains in between that apparently supported a relatively rich vertebrate fauna,” said Eric Roberts, an assistant professor of geology at James Cook University who collaborated on the research while at Southern Utah University.

During much of the Cretaceous Period, Afro-Arabia, India, Madagascar, Antarctica, Australia and South America were joined together as the southern supercontinent Gondwana. Relatively few Cretaceous-age mammals have been recovered from this part of the world, and most of those discovered don’t appear to be related to modern mammals. Notosuchian crocodyliforms may have taken up residence in a “mammalian niche” in Gondwana during the Cretaceous Period. 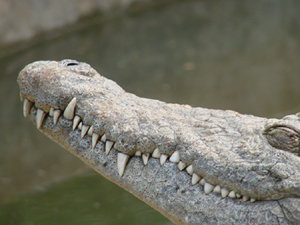 The new species isn't a close relative of modern crocodilians, pictured here, but is a member of a very successful side branch of the crocodyliform lineage that lived during the Mesozoic Era. Photo credit: Nancy Stevens, Ohio University.

“One of the reasons we’re working in different parts of the southern hemisphere, including Africa and Antarctica, is that not as much exploration has been done in these locales. We are still piecing together the puzzle of what animal life was like in these places,” O’Connor said. “Perhaps we just haven’t found the mammals yet.”

Download print-resolution images, watch a video about the research and access additional information about the project from the National Science Foundation at www.nsf.gov/ancientcroc.

For more information about the Ohio University research: http://www.oucom.ohiou.edu/rukwa/index.htm.