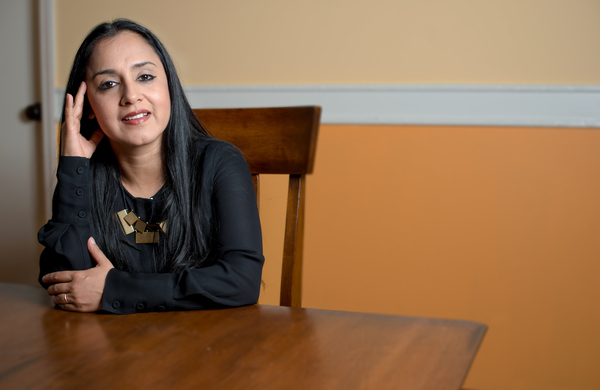 The idea of “home” is fraught with meaning. The desire for a place where we are accepted and where we belong is embedded in the human soul. And the loss of home can cause psychic wounds that last generations, especially when that loss is traumatic.

Devika Chawla addresses such loss in her new book Home, Uprooted: Oral Histories of India’s Partition. Through firsthand oral histories of three generations affected by Partition, Chawla explores how the idea of home echoes through these individuals’ lives and shapes the way they view themselves.

“Home is a historical idea and situation that is made up of and makes up our identity,” says Chawla, an Ohio University associate professor in the School of Communication Studies. “In my view, the conceptual purchase of the book lies in its illustration of how thinking about identity has evolved over the last few decades.”

Neither Here Nor There

In 1947, the British Indian Empire was split into two independent countries: Muslim-majority Pakistan and India, majority Hindu with large subpopulations of Sikhs and Jains. It is estimated that up to 20 million people moved across the new border in the largest mass migration in history. As many as one million more were killed in sectarian violence, which accompanied Partition.

Among the Pakistan Hindus who fled to Delhi was Chawla’s father, Sudhakar Chawla, then a boy. He introduced her to some of the 45 people she interviewed for the book. But she didn’t start out intending to write about home.

“I started with a much broader question: how does the Partition live in the everyday stories told across three generations of Partition families?” Chawla says. “As the fieldwork continued, participant after participant made home a center of their oral history performances.”

In the book’s introduction, Chawla describes the different ways scholars have defined home, often in the context of domesticity (a safe haven) or travel (there vs. here). But for the people whose stories are told in Home, Uprooted, home remains a fluid concept.

“They might be defined as nomadic owing to the watershed moment that displaced them and the persistent discontinuities that shadowed some of their lives,” Chawla writes, “yet they all inhabit and locate home in a multitude of ways—never fully settling into any singular articulation of home.”

For example, one chapter shows how some women consider their pre-Partition lives “nothing,” preferring to focus on the home they built in India. In contrast, another chapter describes men whose nostalgia for their lost homes in what is now Pakistan haunts even their dreams.

Behind all their stories is a lingering question of what might have been—for good or ill.
“It is like losing a limb … like you’ve lost a life that you would love to live over again,” says Kiranji, a Sikh woman in her late 80s. “But, would I be where I am or be what I am, had I not lost this home? I don’t know the answer to that.”

In Kiranji’s case, Partition meant a life of economic freedom she would not otherwise have had.
“Her life story shifted after Partition, because the same values didn’t hold once families were displaced materially, emotionally, and financially,” Chawla says. “Once this system fragmented, women like Kiranji, who were well-educated, found themselves thriving in professional environments. In her case, Kiranji became the founder of a very famous private school in New Delhi.”

A Sort of Homecoming

The theme resonated with Chawla particularly because of her own move from India to the United States. As she was working on her book, she became a U.S. citizen.

“My own family history and my self-propelled migration to the United States had probably attuned me to listening, feeling, and sensing home,” she says. “So I want to say it was an emergent thematic as much to do with my participants as with me, the native ethnographer.”

Chawla’s family story is woven throughout the book, and many of its most moving moments are deeply personal. It opens with Chawla describing her relationship with her paternal grandmother, who was born in what is now Pakistan; it ends with an interview with her father and meditations on her own life in Appalachian Ohio. This final chapter, “My Father, My Interlocutor,” is her favorite.

“In a way, it tells the story of how the book, the project, and the idea came into being,” she says. “It is part reflection, part my father’s oral history, and part the story of the fieldwork of the project. The chapter wrote itself in a week after all others were complete.”

Home will be a theme in Chawla’s work for some time. With Stacy Holman Jones of California State University, Northridge, she is co-editing a collection of essays for Lexington Books titled Storying Home: Place, Identity, and Exile. She also is writing an autobiographical piece on the relationship between habits and home and planning new fieldwork to explore the concept of home among the descendants of former colonizers and the colonized.

“Identities, while ever-changing, are products of historical and colonial circumstance,” Chawla says. “Thinking about identity in and through the frameworks of home and travel frees it from the stranglehold of category-based identity politics such as race, class, sexual orientation, and so on. While all these categories are real and defining, they might not be the only ways that people experience their selves.”

This story appears in the Autumn/Winter 2014 issue of Perspectives magazine.