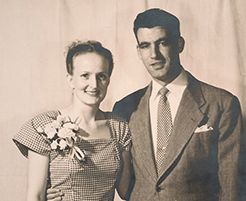 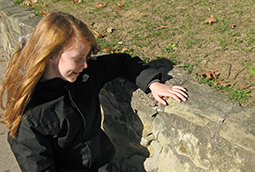 Photo courtesy of: The family Nora Sheridan poses on campus near a carving that her great-grandfather, John Hess, made for her great-grandmother, Nora Tighe, during their undergraduate days in the 1940s.

In the late-1940s, John Hess was bussing tables in Lindley Hall cafeteria when he looked up and noticed fellow Ohio University undergraduate Nora Tighe, who was pursuing a degree from the college of education. John, who served in World War II and was attending OHIO through the GI Bill, was instantly smitten.

“My father fell in love with my mother the moment he saw her,” said OHIO alumna Kathy McWatters. “He told her on their first date he was going to marry her. She was not so easily won over, so he pursued her.”

That pursuit involved carving “Nora” and “John” into a stone wall near Baker Center. Fortunately, John saw his efforts rewarded.

“That won her heart,” said McWatters.

That romantic gesture led to generations of future OHIO graduates, including several educators. In fact, five family members have earned teaching degrees or credentials from OHIO, including Nora, who graduated in 1947.

An Ada, Ohio, native, Nora—the youngest of five children—was the first person in her family to attend college. She taught English and Physical Education at Defiance High School in Defiance, Ohio, for two years before leaving to raise a family with John. They had three children—Kathy, Ed, and Mary—all of whom graduated from OHIO.

Nora returned to education in 1965 at Bishop Hartley High School in Columbus, where she taught, coached, and served as girls’ athletic director and dean of students. In fact, she was instrumental in forming the Girls Athletic Association and the Girls Diocesan Athletic League.

Nora taught at Bishop Hartley until June 1979 and died of cancer that November at the age of 54. She was recently inducted into the Bishop Hartley Hall of Fame.

Nora’s daughter, Mary Hess, received a bachelor’s in Fine Arts from OHIO in 1976 and returned to get her teaching credentials in 1987. She received a master’s in Education and a doctorate in Integrated Curriculum from The Ohio State University. Mary worked in Pickerington Local Schools from 1988 to 2016, teaching art at Pickerington Elementary, Tussing Elementary, and Sycamore Creek Elementary. She died of cancer in 2016 at the age of 62.

“She absolutely loved being an art teacher,” said McWatters.

McWatters, meanwhile, graduated from OHIO with an education degree in Home Economics in 1978 and spent the first 18 years of her career in Fashion Merchandising and Retail Management. In 1989, she opened a before-and-after-school childcare program at St. Philip Elementary School in Columbus.

“I have spent the last 30 years developing and implementing successful after-school programs in both the public and private sectors in Ohio,” said McWatters.

Students who participate in CCLC programs are academically challenged, economically disadvantaged, and fall below grade-level assessment standards. CCLC centers expand learning opportunities that improve students’ academic performance, enhance positive youth development, and engage parents and families in their child’s education. Programs are provided when school is not in session.

McWatters wasn’t the last in her family to receive a degree from OHIO’s college of education. Her niece, Madeline Hess, graduated with a bachelor’s in Early Childhood Education in 2016. She lives in North Carolina with her daughter and husband, Andrew Weissling, who serves in the Army and is stationed at Fort Bragg.

In addition, McWatters’ nephew, Mike, married Patton College alumna Kate Wolfe, who graduated with a bachelor’s in Early Childhood Education in 2004. Kate is working toward her master’s in Reading from OHIO and teaches kindergarten at Ohio State University’s Childcare Program in Columbus. She previously ran an after-school program at Plain City Elementary School in Plain City, Ohio, and taught preschool at Indian Run Elementary in Dublin, Ohio.

Mike and Kate have three kids: Oscar, Nora, and Winnie. They named Nora after Mike’s grandmother, whose name-carving helped spark this lineage of educators and OHIO alumni. Nora, 14, does not know which college she will attend.

“We haven’t talked about schools yet,” said Mike, “but it’s coming fast!”

Overall, the Hess’ OHIO ties run deep. Many other family members graduated from OHIO in non-education majors, and McWatters’ uncle, Bill Hess, served as OHIO’s head football coach from 1958 to 1977.

"We are a proud OU family with a strong legacy,” said McWatters. “My parents met at OU and fell in love, and we, as a family, have the carving, ‘John and Nora,’ as a testament to that love.” 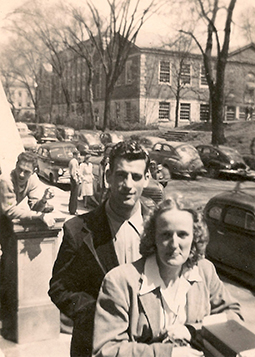 Photo courtesy of: The family Nora Tighe and John Hess standing by Lindley Hall on Ohio University's Athens campus in the late-1940s. 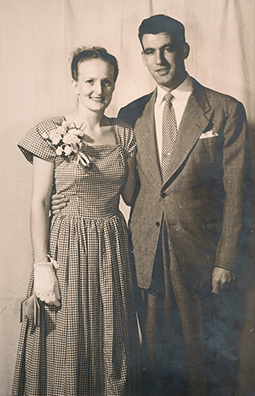 Photo courtesy of: The family Nora Tighe and John Hess attend a Tri Theta dance in the late-1940s.