Four generations of teachers graduated from OHIO’s College of Education 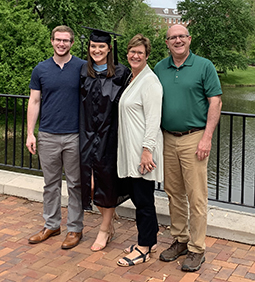 Photo courtesy of: Weininger FamilyAfter graduating as the fourth generation of teachers in her family, Madison Weininger celebrates with her boyfriend Alex Giesige and her mother Robin and father Tim.

Some teachers are called to the profession. Others, well, it’s in their blood.

Madison Weininger, a fourth-generation Teacher Education graduate from Ohio University, falls in the latter category. Her mother, grandmother, and great-grandmother all received teaching degrees from OHIO.

“My family did play a role in wanting to become an educator,” said Weininger, who received a bachelor’s in Early Childhood Education and a master’s in Reading Education from The Patton College of Education in 2018 and 2019, respectively. “Growing up, I loved playing school and helping my mother get ready for school.”

“It warms my own teacher heart that Madison has taken on the profession of teaching,” said Robin. “Madison continuing her education at Ohio University as a fourth-generation teacher graduate makes us all proud. I remember her college visit in high school to OU. She knew by the end of the tour she was going to go to OU and told me she really didn't need to visit another college. I was excited for her to have the Athens experience.”

The Athens experience, of course, is nothing new for Weininger’s family. Her grandmother, Gretchen Hossenlopp Garrett, graduated from OHIO in 1957 and taught elementary education in Toledo before changing careers to business accounting. She and her husband, Robert, lived in Athens with Robin and their other daughter, Jill, from 1965 to 1980 before moving to northern Ohio. Gretchen and Robert reside in Uniontown, Pennsylvania, where they are both retired.

“My husband and I are deeply grateful for the educational accomplishments of our daughters, son-in-law, and grandchildren as they took the lead encouragement from their parents, grandparents, and great-grandparents to share their gifts of knowledge with others,” said Garrett.

Meanwhile, Weininger’s great-grandmother, Katherine J. (Atkinson) Hossnelopp, graduated with a bachelor’s degree in education from OHIO in 1922 and was a public school teacher in Toledo and Newcomerstown, Ohio, for 36 years before retiring in 1968. She passed away in 1989.

Weininger’s family history laid the foundation for her career path, as did growing up in Celina.

“I had really amazing teachers in my hometown, and I would say they also played a major role in me wanting to become an educator,” she said. “There were a few aspects about learning and schooling that came easy to me, but some others were a bit of a struggle. I remember painstakingly trying to get through books for AR––accelerated reader tests––and having nerves before assessments of any kind. The teachers I had were wonderful and helped me get through anything, but I mostly wanted to become a teacher so I would be able to help students who had similar experiences as me and (could) try to make it easier experiences for them.”

Weininger, to her credit, made the most of her Patton College experience. She made the Dean’s List every semester, graduated with a 3.862 GPA, and completed internships at Nelsonville Elementary (500 hours) and Vinton County South Elementary (600 hours). She also spent 300 hours working with preschool students in the College’s Child Development Center.

Weininger also took advantage of some of the College’s learning opportunities outside of Southeast Ohio. In 2016, she taught in San Narciso, Belize, for a week to better understand the struggles of teaching within a high-risk, diverse classroom.

“It was a wonderful learning experience,” she said. “The students were truly one of a kind. Loving, caring and more welcoming that I could ever imagine.”

Weininger plans to remain in Southeast Ohio and hopes to secure a teaching position in Athens.

“The Patton College did an outstanding job preparing me for my career,” she said. “The professors, advisors, and experiences in the classrooms made me feel like I had all of the support needed to succeed. I truly enjoyed being able to immerse myself in the classroom so early on in my undergraduate career. It only solidified my career path.”

Part two of this series will run next week. 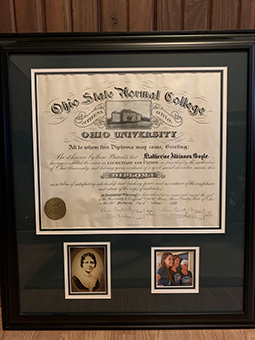 Photo courtesy of: Weininger FamilyMadison's great-grandmother, Katherine J. (Atkinson) Hossnelopp, graduated with a bachelor’s degree in education from OHIO in 1922. 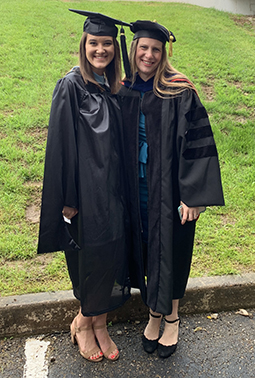