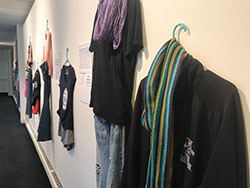 Photo courtesy of: Andy EllingerThe "What Were You Wearing" traveling exhibit is pictured at OHIO's Lancaster campus. It will soon travel to OHIO regional campuses across the state.

There is an ongoing movement across the Ohio University community to raise awareness of sexual violence on campus and to support survivors, and that community extends to OHIO’s regional campuses across the state.

“What Were You Wearing,” an exhibit that began on OHIO’s Athens campus, is now a traveling exhibit that depicts what sexual violence survivors were wearing when they were assaulted. By traveling across the state, exhibit sponsors hope to increase communication about eradicating rape culture and help people understand it’s everyone’s job to end sexual violence.

“The amazing and wonderful thing in regard to Bobcats across the campuses is that we are seeing a greater understanding that sexual violence prevention doesn’t belong to any one person,” said Dr. M. Geneva Murray, director of OHIO’s Women’s Center. “We do not want to do the exhibit in Athens and then not offer it anywhere else; we don’t want it to just sit in a cupboard somewhere.

"It’s very important that we continue working with regional campuses and others on our own campus," she continued, "because I think what this exhibit is showing is that it’s everyone’s work."

In the exhibit, more than 40 stories from survivors across Southeast Ohio are displayed through writing, audio and braille. The stories coincide with pieces of clothing, ranging from oversized T-shirts, to yoga pants and pajamas. Together, the items tell a powerful story that drive the point home: It doesn’t matter what they were wearing.

One survivor wrote, “I had been leaving soccer practice in June so I was in my sweaty shirt and soccer shorts. I felt gross as it was and he just made me feel more gross. Since then I haven’t felt clean.”

“While stories of sexual violence are different for everyone, we can also use the exhibit as an opportunity to see the similarities that cross everything – which is that there’s no justification for sexual violence and the impact is real,” Dr. Murray explained.

The exhibit just left OHIO’s Lancaster campus where Dr. Pamela Kaylor, associate lecturer in women’s and gender studies and communications at OHIO Lancaster, said it was very well-received. More than 200 people viewed the exhibit, which was displayed during their “Take Back the Night” rally, an annual event to take back the night from sexual and domestic violence.

“It’s a very well-done exhibit,” Dr. Kaylor noted. “It is shocking but it’s very well put together in a way that is accessible. You can spend time reading the stories and looking at the clothing. The best point about this exhibit is that it answers that question that people sometimes ignorantly ask when someone is sexually assaulted: ‘Well what were they wearing?’ It gives you a very clear understanding that it doesn’t matter what they were wearing.”