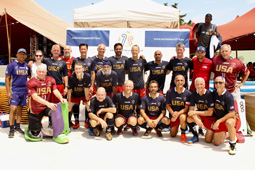 Photo courtesy of: Patton College of EducationOver 20 team members, including players, coaches, and trainers from the United States, made it to Barcelona for the 2018 Masters World Cup this summer.

Harvey’s team placed eighth in the event, which took place July 27 to Aug. 6.

“This was an excellent achievement,” said Harvey, “especially given we only really get the team together a few days before the tournament starts.”

Harvey coached players from all over the United States, from New England to the West coast. One player was living in Abu Dhabi, United Arab Emirates, at the time of the tournament. Tryouts were held in Moorpark, California, in January 2018.

Masters Field Hockey is a competitive international field hockey league for adult men and women, with more than 70 teams worldwide. Players 35 and older are eligible to participate, and Harvey’s team was composed of men 55 and older. Harvey adjusted his coaching strategies and techniques to accommodate their physical needs.

“We had to manage the physical side of things, especially when the tournament started (because) you played games on consecutive days,” said Harvey. “Due to the high tem-peratures – we played one game at midday in nearly 100-degree heat – we also got ice packs for when players rotated off the pitch and managed our warm-ups before the games.”

After a three-day preliminary training camp, the team opened the tournament with a 4-3 win against Spain in group play. Spain, though, ultimately won the group, while the United States placed third. England won the Masters World Cup.

Harvey, who has worked with USA Field Hockey since 2014, said that coaching in the World Cup was “exciting but also nerve-wracking.”

“Simply being in the team environment where the camaraderie was high and everyone was looking out for each other was awesome to be a part of,” said Harvey. “It made me appreciate the time I was able to spend with everyone, especially when I was away from my family for such a long period of time.”

Harvey’s experience impacted his coaching strategy – specifically, his ability to analyze opponents before matches. Coaching in the tournament gave him fresh ideas to bring to the classroom about choosing appropriate strategies and tactics for opposing teams.

“I just think it is important for any coach to continually look to challenge and improve themselves,” he said. “I am the type of person who seeks new challenges and puts my-self in uncomfortable situations. By doing this, you can continue to grow and learn as a coach and make yourself a more well-rounded human being.” 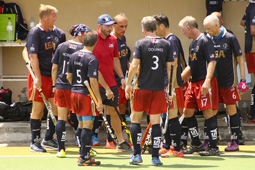 Photo courtesy of: Patton College of EducationDr. Harvey talks to Team USA during a timeout in an afternoon game. 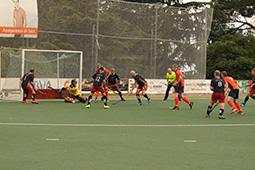 Photo courtesy of: Patton College of EducationThe Netherlands' goalkeeper blocks a shot from Team USA during their game on July 28.