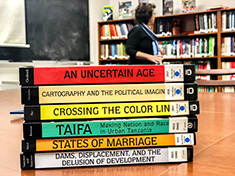 Photographer: Alaina BartelBooks in the New African Histories series published by Ohio University Press are stacked on a table. The series has won many international and national awards.

A book published in the New African Histories series by Ohio University Press has once again been named an international award winner. Paul Ocobock, an associate professor in the department of history at Notre Dame, won the Morris D. Forkosch Prize in the field of British, British Imperial or British Commonwealth history since 1485.

Ocobock’s book, “An Uncertain Age: The Politics of Manhood in Kenya,” was also named a finalist for the Bethwell A. Ogot Book Prize from the African Studies Association.

These honors add to an already impressive track record of award-winning books published by Ohio’s oldest scholarly press, and in the New African Histories series.

Many of the books published in the series have won prizes. It's an honor for both the authors and the Press.

Ocobock said it was invaluable to work with series editors Jean Allman, Allen Isaacman and Derek Peterson, as well as Berchowitz, the editor-in-chief. He noted that during the review process, the editors offered him indispensable feedback on the manuscript and he said it would not be as strong a book today if had not been for their guidance.

“I was eager to publish with Ohio,” Ocobock said. “It's the leading publisher in African Studies and it has a reputation for publishing really rigorous scholarship.”

Ohio University Press has to turn away many manuscripts because it can only publish 45-50 books a year and a sizeable portion of those are African studies. Berchowitz added that because the Press is unable to accommodate all of the excellent work submitted, the bar is quite high.

It publishes less than 1 percent of the manuscripts sent to it each year, according to Berchowitz. The books that it does move forward with are unique, pathbreaking ones that build on what came before them and are paradigm changing.

“We’re looking for books that change the way you think about a particular topic, so that if you were going to research or teach a particular subject within African history, that you would have to read this particular book,” the editor-in-chief said.

Julie MacArthur, another award-winning author, said the publishing of her book, “Cartography and the Political Imagination,” through Ohio University Press played an instrumental role in being nominated for and winning prizes internationally for her work.

The book won the 2018 Joel Gregory Prize, which recognizes the best book in African studies by an author at a Canadian Institution. The book was also a finalist for the 2017 Bethwell A. Ogot Prize from the African Studies Association.

“I knew that OUP had a tremendous reputation in publishing some of the most exciting and cutting-edge work on African history,” said MacArthur, assistant professor at the University of Toronto, “but I could not have expected the level of expertise, engagement and care that they would bring to this relationship, especially as a junior scholar.”

MacArthur added that the dedication of the editorial staff, including the high caliber peer reviewers, copyeditors, series editors, marketing team and Berchowitz, is one of the “greatest joys of working with OUP.”

Dedicated is an understatement. Much of Berchowitz’s life has been committed to the publishing of African studies — even before she started with OUP in 1988.

She first entered publishing with Oxford University Press in Johannesburg, South Africa. Then, Berchowitz worked as the sales manager for Ravan Press, an antiapartheid scholarly and literary press.

Berchowitz is retiring in a month and she is confident Ohio University Press will be able to meet and exceed its high standards.

The director said she has been associated with building the many African studies series, but she didn’t make it happen by herself. She credited the invisible network of professionals at The Press and at Ohio University.

“I think the Press mirrors what the university looks to accomplish in developing and supporting the highest quality scholarship and writing in the humanities,” she said.

Another book in the New African Histories series, Keren Weitzberg’s “We Do Not Have Borders,” is a finalist for the Melville J. Herskovits Prize from the African Studies Association — one of the most prestigious African studies prizes.

For more information about and to support Ohio University Press, visit www.ohioswallow.com.