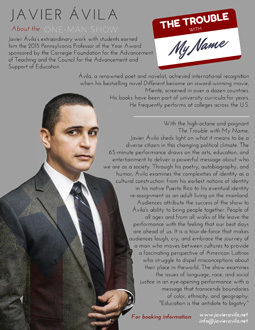 The Multicultural Center is teaming up with the Latino Student Union and Sigma Lambda Gamma, a Hispanic sorority and Alpha Si Lambda, a Hispanic co-ed fraternity, to put on events honoring National Hispanic Heritage Month, which is celebrated annually from Sept. 15 through Oct. 15.

The month’s headline speaker, Javier Ávila is putting on his one-man show called, “The Trouble with My Name,” at 7 p.m. Tuesday, Oct. 9, in Baker University Center Ballroom A.

Ávila, a renowned professor, poet and novelist, has won multiple awards for his work, including the 2015 Pennsylvania Professor of the Year Award. His best-selling novel, “Different,” was turned into a movie titled, “Miente,” which was screened in more than 12 countries.

In his talk, Ávila will discuss what it means to be a Hispanic in the ever-changing political environment. He sheds light on the arts, education and entertainment culture to deliver a message about who we are in society. The show touches on the issues of race, language and social justice coming from the perspective of a native Puerto Rican coming to the U.S and embracing the U.S. lifestyle and culture.

The performance is inspired by three different classical plays written by the Spanish writer Miguel De Cervantes. Efe Tres Teatro’s interpretation is an opportunity for students and other members of the Athens community to understand how classical Spanish theater is adapted for modern audiences. This is a special and rare opportunity for OHIO students, because most Latin American and Spanish theater troupes only visit major cities.