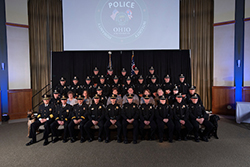 The OUPD pose for a group photo at the fifth annual Employment Recognition Ceremony.

The Ohio University Police Department recognized its most outstanding police officers and a student sexual assault survivor during its fifth annual Employee Recognition Ceremony on Sept. 25 in the Walter Hall Rotunda.

The event gave special recognition to OUPD employees who are new, retiring or accomplished a special achievement during the past year. Although the event focused on the bravery and accomplishments of the officers, it also recognized several members of the Ohio University community who have been proactive in combating sexual assault and helping survivors.

In the wake of several recent sexual assaults that have occurred on and off campus, the evening paid tribute to all those in the community actively seeking to stop it and lending their voices to help survivors. Following a rendition of the National Anthem by “Title IX,” an all-female acapella group at OHIO, and the presentation of the colors by ROTC honor guard detail, Cadet Valaitis, Cadet Ibañez, Cadet Untea and Cadet Fee, Ohio University President M. Duane Nellis thanked the officers for protecting the OHIO community and administered the Oath of Office.

In her speech, Byers touched upon the lack of women in leadership roles within the FBI and how having women in law enforcement can provide a distinct strength and perspective to every situation. Much like the different perspectives women can bring to these roles, OUPD officers must also evaluate the different angles to keep the campus and community safe.

“OUPD officers act as part mentor, part counselor, but at the end of the day still have all the duties of a police officer, ready to serve the community.” Byers said. “It’s in the adversity they face that makes these officers who they are today, an honorable group of men and women who put their shield on every day to protect.”

She concluded by applauding the officers for their willingness to run into the line of danger to defend the community and for following the ideals of the FBI: Fidelity, Bravery and Integrity.

Following the keynote address, awards were given to several members of the department for their service and special accomplishments. In addition to the awards, recognitions were also given to community members and programs that have played an especially important role in helping survivors of sexual assault.

Both the Survivor Advocacy Program, a service that provides confidential support and resources to student survivors of sexual assault, dating/domestic violence and stalking, and the Ohio University Women’s Center, a center that acts as a catalyst to promote awareness, education and advocacy about women, gender and diversity at Ohio University and the surrounding communities, were awarded the Campus Partner Award for their constant willingness to help survivors and educate others.

One of the highlights of the night was the honoring of sexual assault survivor Brie Sivy with the Citizen Recognition Award. An OHIO student, Sivy reported and spoke out about her sexual assault, courageously persevering through a lengthy investigation until her abuser was brought to justice. Since then, she has shared her story to make an impact on other survivors and has been an integral part of the “Start by Believing” campaign.

This past April, Sivy and Det. Mathew Austin, an OUPD detective who has worked extensively with sexual assault survivors and investigated Sivy’s case, were awarded the Law Enforcement and Survivor Special Courage Award at the 2018 Ohio Crime Victim Justice Center's Models of Justice (OCVJC) Awards Celebration in Columbus, Ohio. Sivy continues to publicly speak about sexual assault and inspire other survivors.

During the ceremony, OUPD gave the following special recognitions: 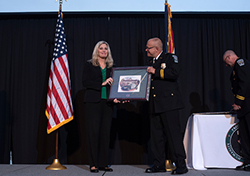 Keynote speaker, Angela Byers, special agent in charge of the FBI's Cincinnati Division, receives a signed photo from the OUPD. 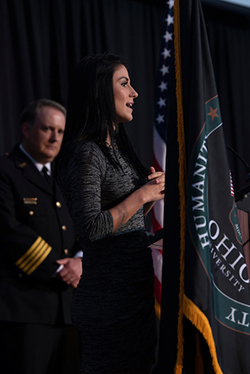 Sexual assault survivor, Brie Sivy receives the Community Member Recognition Award for speaking up and helping the OUPD through her case's investigation.