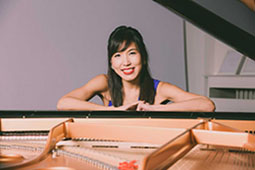 The Ohio University School of Music presents a concert performance by the celebrated pianist, Rachel Kudo, on Sunday, Sept. 23, at 8 p.m. in the Glidden Recital Hall. Admission to this concert is free and open to the public.

A first prize winner of the 2018 Leipzig International Johann Sebastian Bach Competition, American pianist Rachel Kudo, a recitalist, soloist and chamber musician, has been captivating audiences around the globe with her "stunning virtuosity."

Born in Washington D.C. to Japanese-Korean parents, Kudo began studying piano at the age of 4 with the late Emilio del Rosario at the Music Institute of Chicago and later graduated from the Juilliard School. During her time at Julliard, she was a recipient of the Chopin Prize, a prize awarded to offer performance opportunities and financial support to young American pianists. She currently divides her time between New York City and Venice, Italy.

Kudo’s recital is free and open to the public, made possible through support from Arts for OHIO, Ohio University Performing Arts Series and Dr. George Weckman.