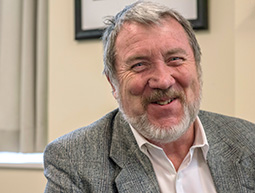 Mould’s 30-year career at Ohio University took him in many directions—as a full-time faculty member, as associate director of the School of Media Arts & Studies, as a founding faculty member of the Global Learning Community (now the Global Leadership Center), as director of the master’s program in Communication and Development Studies, and finally as associate dean for research and graduate studies of the Scripps College of Communication.

A newspaper and TV journalist by training, Mould now works as a freelance writer. His work has appeared in the Christian Science Monitor, History Today, Times Higher Education, Transitions Online, AmericanHeritage.com, The Montreal Review, Newsweek, and other publications.

Monsoon Postcards: Indian Ocean Journeys is the second travelogue written by Mould, which follows him as he traverses the Indian Ocean—from Madagascar through India and Bangladesh on to Indonesia. His first book, “Postcards from Stanland: Journeys in Central Asia,” was published by Ohio University Press in 2016 to wide readership and critical acclaim.

Mould will be featured later this year on RMWorldTravel with Robert & Mary Carey and Rudy Maxa, as well as The Thoughtful Travel Podcast. The popular radio program Travel with Rick Steves has also shown interest in having Mould on the show. An interview with Mould about the process of writing “Monsoon Postcards” can be accessed now on the Ohio University Press Podcast page. Mould will be reading from his latest book at Athens County Library branches this fall. 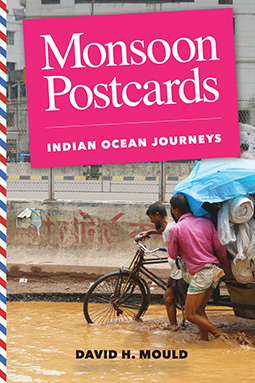