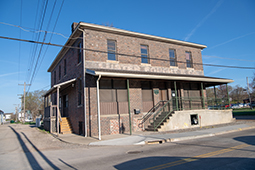 The building at 9 Factory Street has a storied past, and that legacy will be preserved as part of the  new Heritage College of Osteopathic Medicine building that will be constructed on that site.

Architects and designers for the new medical education building immediately began plans to preserve as much of 9 Factory Street as possible when community interest in preserving the building did not materialize. Existing building brick will be salvaged and reused as part of a new café in the Heritage College, tentatively named Factory Street Café. Photographs of the chalk art and signatures on the second-floor bricks walls will be displayed in the café. Ohio University Facilities Management & Safety has already salvaged doors and other materials.

“We’re focusing on iconic aspects of the Factory Street building, and repurposing materials where it makes sense to capture that building’s character as part of the new construction,” said Ken Johnson, D.O., executive dean of the Heritage College of Osteopathic Medicine and Ohio University chief medical affairs officer. “We have found some beautiful and creative ways to honor 9 Factory Street in the new facility’s café.”

The site and adjacent vacant space will become part of OHIO’s new Union Street Green, which was included in the Ohio University Comprehensive Master Plan passed by the Board of Trustees in March 2016. Construction on the Green’s anchor, the Heritage College building, begins this summer, and the building is expected to be complete in Spring 2021.

As part of the master planning process, OHIO shared its intent to seed the new green on Union Street, repositioning the existing departments there to maximize the land and position academic units to build closer relationships between academic units and surrounding business partners, such as OhioHealth. Most of OHIO’s Athens Campus is either on the core historic College Green or in the flood plain. The Union Street Green property is outside the flood plain, with several building site opportunities that don’t require major relocation of existing units, creating overall cost efficiencies.

OHIO made the 9 Factory Street building available to the community for possible relocation in Spring 2018. After meeting with the city of Athens and the Southeast Ohio History Center to discuss alternatives, OHIO issued a request for proposals listing ways in which OHIO would help with relocation of the historic building. The University already planned to disconnect all utilities from the building and was prepared to provide up to $60,000 toward relocation and to facilitate coordination with the city of Athens. No bids were received.

“We are looking forward to seeding a new green for our campus that will provide academically enriched experiences that will benefit our community for years to come,” Associate Vice President for University Planning Shawna Bolin said.

According to county auditor’s records 9 Factory Street was constructed in 1916. It originally housed the Moler Feed and Poultry Company, and in 1926, the Luster Fought Company moved into the building, according to an Athens Messenger article published that year. The Fought Company manufactured flavoring extracts, family drugs and toilet articles; served as a confectionary wholesaler; and packed teas, spices and grocers drugs, the article said. It later housed the Factory Street Dance Studio, a tool rental shop and other businesses before being purchased by Ohio University in 1991.

The building was renovated in 2002 and again in 2007 to accommodate a variety of office uses. Demolition of the building is projected to begin in mid-June.