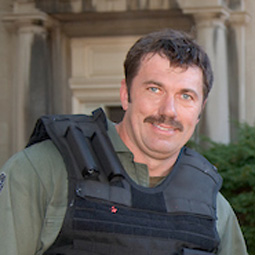 Photo courtesy of: University Communications and MarketingPolice Officer Dave Gillogly will retire from OUPD on April 30

The Ohio University Police Department will host a retirement party for Police Officer Dave Gillogly from 3 to 5 p.m. Tuesday, April 30, in HRTC 141-145 on the Athens Campus.

Gillogly, who will enter retirement after the party, began his career in the Ohio University Police Department in 1990 as a student worker before being hired as a full-time police officer in 1993.

One of his career highlights was being presented with the OUPD’s prestigious Lifesaving Award in September 2017 after he prevented a student from jumping to his death from a residence hall window.

OUPD Chief Andrew Powers shared his thoughts on the career of Officer Gillogly.

“Officer Dave Gillogly served the Ohio University community for more than 25 years,” said Chief Powers. “He worked in numerous roles over the course of his career, including assignments as a field training officer, Rape Aggression Defense (RAD) instructor, court liaison officer, evidence technician, and SWAT team member. He brings a calm demeanor and levity to every situation he encounters, which is very beneficial in law enforcement. We will miss him and wish him much happiness in retirement!”

Gillogly’s wife, Tobe, is the chairperson and an assistant clinical professor in the Ohio University Department of Interdisciplinary Health Studies. The couple has a teenage son, Jacob.

The retirement party is open to the public and refreshments will be available.