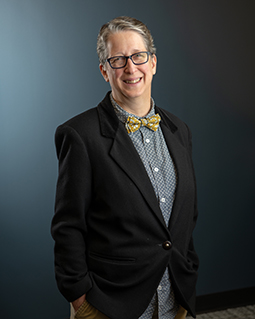 Distinguished Professor Susan Burgess, Ph.D., is a well-regarded professor of political science and researcher at Ohio University whose path-breaking scholarship has transformed how American politics is studied in the United States and across the globe.

Burgess’ work in the areas of law and courts, politics and sexuality, popular culture, and radical politics has prompted scholars and professional associations to redefine and expand the boundaries of mainstream political science and interdisciplinary legal studies.

On Monday, Feb. 25, Ohio University will honor Dr. Burgess during the Distinguished Professor Portrait Unveiling and Lecture. The event begins at 6:30 p.m. with a reception in the Baker University Center Ballroom, followed by the Distinguished Professor introduction and portrait unveiling at 7 p.m. Following the unveiling, Dr. Burgess will present her lecture, titled “LGBT Inclusion in American Life: Pop Culture, Legal Transformation, and Critical Civil Rights.”

“Distinguished Professor Burgess’ research in political science has positioned her as a national leader,” said Ohio University President Dr. M. Duane Nellis. “Through her teaching, she has helped make thousands of students informed global citizens. And she has inspired her peers and paved the way for change in our community and in our world. Dr. Burgess is extremely deserving of this recognition.”

Burgess is the first female faculty member in the College of Arts and Sciences to receive the University’s Distinguished Professor Award. She is the 53rd OHIO professor and the fifth OHIO woman to receive this award since its inception in 1958.

“I am so grateful to be a part of a community that recognizes the intricacies of political science. This is an extremely meaningful honor,” said Burgess. “It is rewarding to interface with students on a daily basis to talk about the ways American culture is evolving and changing, now more so than ever. I am truly humbled by this award.”

Students, faculty and staff who would like to attend the Feb. 25 Portrait Unveiling and Lecture can register online.