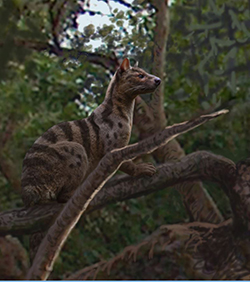 Paleontologists from Ohio University have discovered a new species of extinct meat-eating mammal that lived alongside the oldest-known apes and Old World monkeys. The new predator from Tanzania stalked an ecosystem that was undergoing dramatic climatic and tectonic upheaval as Africa collided with Eurasia and the modern East African Rift System formed.

In a new study published in the open access journal PLOS ONE, the researchers name Pakakali rukwaensis, a bobcat-sized animal known from a portion of the skull bearing a slicing tooth. The new fossil offers important insight into a time 25 million years ago when the modern landscape and animal communities of the African continent began to emerge.

Pakakali is Swahili for “fierce cat” because the fossil is from a large cat-like carnivore that would have fed primarily on meat. The specimen reveals that Pakakali may also have incorporated other foods into its diet, like fruit or insects. The species name, rukwaensis, refers to the Rukwa Rift Basin in southwestern Tanzania where the fossil was discovered.

“Research and discoveries like Dr. O’Connor, Dr. Stevens and their team have uncovered personify OHIO’s academic mission,” said Ohio University President M. Duane Nellis. “We are a research University, and our faculty are committed to advancing the frontiers of knowledge.”

Pakakali’s behavior was probably cat-like, but it belonged to an ancient lineage of meat-eating mammals called hyaenodonts. Hyaenodonts evolved many meat-eating specializations similar to cats, dogs, and hyenas, but they were a completely separate group of mammals that filled apex predator roles in Europe, Asia, North America, and Africa after the extinction of the dinosaurs. Today, hyaenodonts are completely extinct, replaced by modern carnivores. Pakakali was found in rocks that are precisely dated to the beginning of the transition in Africa from a hyaenodont world to a modern carnivore world.

“The shift in Africa from hyaenodonts to modern carnivores is like a controlled experiment,” says study co-author Matt Borths, a National Science Foundation Postdoctoral Research Fellow in the Department of Biomedical Sciences at Ohio University.

“We start with only hyaenodonts. Then around 25 million years ago the relatives of modern carnivores arrive. The two groups coexist for a few million years, then hyaenodonts are driven to extinction and we’re left with The Lion King. With fossils like Pakakali we can start to unravel the details of that extinction. Were the lineages competing? Were they adapting differently to a drier, more open landscape?”

Based on the findings of this study, one possibility is that hyaenodonts were pushed to become more specialized meat-eaters by the invasion of modern carnivorans. Such specialization may have made hyaenodonts more vulnerable to environmental change, at the same time that the formation of the modern East African Rift System dramatically impacted both landscape and climate.

Pakakali was discovered by an international team of scientists from the United States, Australia, and Tanzania, as part of the Rukwa Rift Basin Project (RRBP), an interdisciplinary collaboration examining the development of the modern African ecosystem. In over a decade of exploration, RRBP researchers have described the habitat Pakakali called home along with many other animals that occupied the ecosystem.

“The environment containing Pakakali reveals a fascinating window into extinction dynamics,” comments Dr. Nancy Stevens, Professor in the Department of Biomedical Sciences in the Heritage College of Osteopathic Medicine at Ohio University and co-author of the study. “Faunal turnover highlights the vulnerability of carnivores to rapid environmental change, a topic that we are grappling with on the African continent today.”