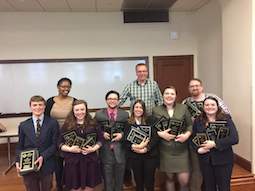 Since then, the speech and debate program at OHIO has flourished into one of the most competitive of its kind — and the University’s alumni are part of the program’s success.

Harold White, BSCOM ’46, was a member of the OHIO’s forensics team, now called the Speaking Bobcats.

After graduation, White served as a U.S. Bankruptcy Court judge for the Northern District of Ohio, and his wife and fellow Bobcat, Jeannette, taught accounting and business education at Akron’s East High School. Though both are deceased, their legacy at OHIO lives on through their namesake scholarship.

The Harold and Jeannette White Scholarship in Forensics is awarded to individuals who are seeking a full-time undergraduate degree at the University, are a member of the forensics team and show exceptional promise in the forensics field.

Dan West, assistant professor in the Scripps College of Communication and the current director of forensics, emphasized the importance of the team’s history.

OHIO is a founding member of the NFA, which was established in the 1970s to provide leadership in intercollegiate speech and debate education in the United States.

Scholarship recipient Logan Pasqual said being a part of the team is an instrumental part of his college experience. During his college search, he only considered schools with successful speech and debate teams.

“I like the challenge of having to prepare and memorize a speech in front of a different audience,” the psychology senior said. “It has helped me learn how to prepare speeches and learn to communicate in a larger setting. No matter what job you have, you will always have to present your ideas in a communicative and creative way.”

Because of the scholarship, Pasqual is able to focus on his extracurricular activities like Speaking Bobcats.

“Considering how much dedication speech takes and how much time the practice takes, it’s similar to having a job,” Pasqual said. “The scholarship is beneficial to have because I don’t have to worry about having a job. It allows me to enjoy this to the extent that I do. We are one of two teams that has been to every single consecutive national championship. Without the support of our alumni, we wouldn’t have made it.”

In addition to the Whites’ donation, a campaign was started in 2015 to encourage alumni to donate to the speech and debate team. The 3rd Century Speech and Debate Scholarship supports the hard work and dedication of the current students in the program.

Campaign donor and OHIO alumna Terrie Temkin, BSC ’71, came to OHIO in 1968 because of the College of Communication and her love for the campus.

“I knew I wanted to major in speech, and OHIO had a great speech program. The moment I crossed Union and Court Streets, I fell in love with the campus,” Temkin said.

Temkin became a dedicated member of the forensics team during her time at OHIO. She participated in tournaments, just as the current students continue to do.

Temkin, who now works as a consultant, currently sits on the Dean’s Advisory Council for the Scripps College of Communication and is continually learning about what is happening on campus.

“The opportunities students have today may be different from what I had, but the passion is just the same. The students are incredibly driven and successful in the program,” Temkin said. “I want to support opportunities for students who want the chance to get better at presenting, who want the camaraderie and who want to compete at an intellectual level. I feel at OHIO the forensics team has always been strong. It has always given to students, and it has given students the platform to tell a story.”