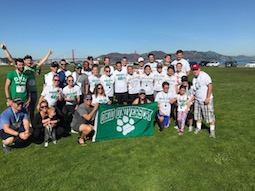 In September, nearly 50 Bobcats and friends laced up their running shoes for the second annual Bobcats by the Bay 5k in San Francisco.

This year’s participants raised more than $3,500 for the society, nearly double the success from the 2016 race. Robert Gibson, BSH ’03, Bay Area Alumni Chapter president, said he chose to donate to the LLS because of its widespread benefit to a variety of cancer research.

“Everybody’s impacted by cancer,” Gibson said. “The LLS focuses their research on blood cancer. A lot of the research they do positively impacts other cancers. They’re constantly coming up with new treatments.”

Gibson, whose own father was afflicted with leukemia, believes in the event’s continued success. Next year, he hopes to involve more community members.

The Bay Area Chapter’s service event not only unites fellow Bobcats in the area, but creates an opportunity for members to leave a significant impact on their community. This selfless passion for service and charity demonstrates the impact alumni chapters can have when they come together for good.

The chapter was recognized for their commitment to service at OHIO’s Volunteerism Awards Ceremony in May, when they accepted the Alden Community Service Award.

“Ohio University had a positive impact on my life,” Gibson said. “I think I can bring all of our Bay Area alumni together and give back as a thank you to Ohio University for everything it did for us.” 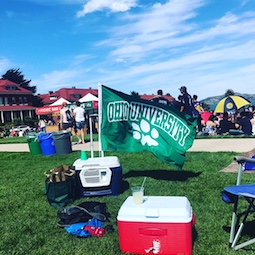