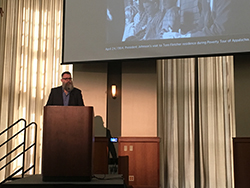 Photographer: Jessica RutkowskiAppalachian photographer Roger May visited Ohio University and provided a public lecture on his project, "Looking at Appalachia" on Sept. 25.

Appalachian photographer Roger May visited Ohio University for the first time and provided a public lecture on his project, “Looking at Appalachia,” as part of the Ohio University College of Arts and Sciences’ Wealth and Poverty Theme Sept. 25 in Walter Hall.

The lecture was cosponsored by the Appalachian Rural Health Institute and Wealth and Poverty Theme.

Throughout his lecture, May displayed numerous photographs from his project that explore the diversity of Appalachia fifty years after the declaration of the War on Poverty.

He explained that "Looking at Appalachia" began after he recognized that, soon after the War of Poverty was declared, various kinds of photography began circulating that visualized the need within the Appalachian region, but also reinforced certain Appalachian stereotypes.

In an effort to combat such stereotypes, May launched his project with a single Instagram post in early 2014. He noted that his initial hope for the project was to serve as a starting point for conversation about the various poverty-related stereotypes that he saw being reinforced. He has continued to encourage people across the nation to participate in his crowdsourced photography project.

After completing his lecture, May opened the floor for questions; one member of the audience asked about the way in which he interacts with the people he photographs.

Since 2014, Roger May's project has been covered by The New York Times, National Geographic, The Atlantic, and more.

May said that his project continues to encourage and accept public photo/writing submissions. Those interested in learning more about submission guidelines can visit: http://lookingatappalachia.org/submission.