Bobcats far and away made it “Back in the Mix, Back on the Bricks” for Homecoming 2017.

Ohio University called alumni, as well as friends and students, back home to revel in Ohio University’s rich musical history and fill Athens with Bobcat pride.

The weeklong Homecoming celebration, Oct. 2-7, themed “Back in the Mix, Back on the Bricks,” honored the School of Music’s 100th anniversary and the Marching 110’s 50th anniversary. It was also a nod to memories of the many DJs and musicians who found their way through Athens’ bricks. 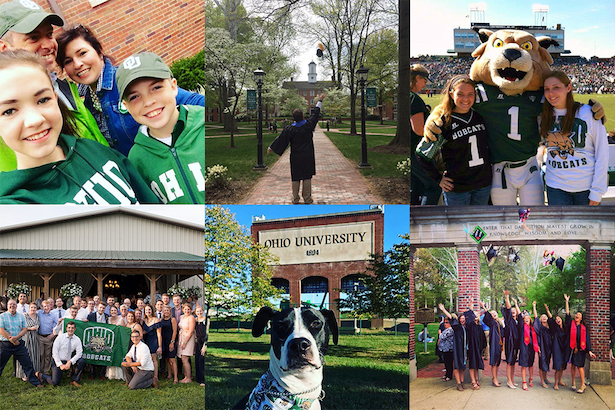 undefinedDuring Homecoming week Bobcats recalled the best years of their life for the Instagram competition Bobcat Beats. Using #BobcatBeats, they shared their musical memories that reflected their University experience. Each day a winner was chosen to receive swag from The Bobcat Store. Baker University Center was also a record of Ohio University memories. The soundtracks that represented a Bobcat’s OHIO years were creatively strewn throughout the building.  “The theme also reminds us of the dynamic notes of diversity that Bobcats embrace. The composition of sounds, memories and people on campus resonate in Bobcat hearts long after they have left our bricks” said David Bambrey, interim assistant vice president of alumni relations, and OHIO Alumni Association interim executive director. 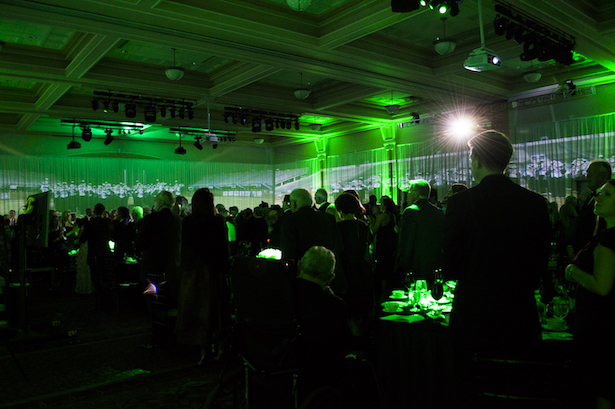 undefinedBambrey opened the 77th annual Alumni Awards Gala at Baker University Center Friday night. The black-tie event celebrated the achievements of 14 extraordinary individuals “whose talent, service and love for their alma mater have topped the charts.” 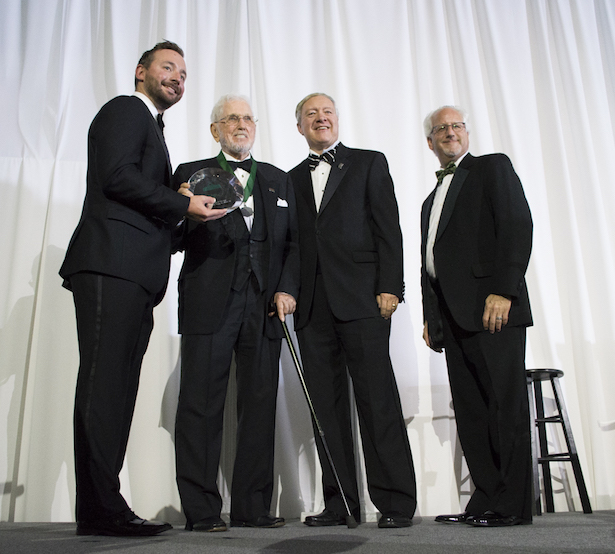 undefinedPresident M. Duane Nellis presented the Alumnus of the Year award to Raymon B. Fogg, Sr, BSCE ’53, HON ’05 (second from left). It is the most prestigious award bestowed upon an alumnus or alumna. Founder and chairman of the board of Ray Fogg Building Methods, a premier contracting company in Northeast Ohio, Fogg was honored for his years as an accomplished entrepreneur and being a benevolent humanitarian. 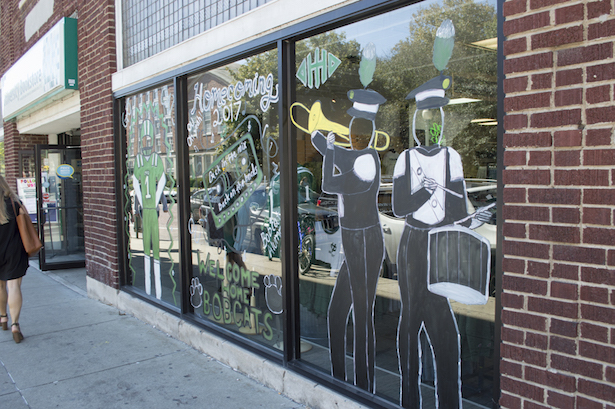 undefinedHomecoming week began with the 15th annual Paint The Green Competition. More than 15 Ohio University offices and local businesses each incorporated a different spin on the 2017 Homecoming theme into the displays of OHIO pride across campus and uptown Athens. 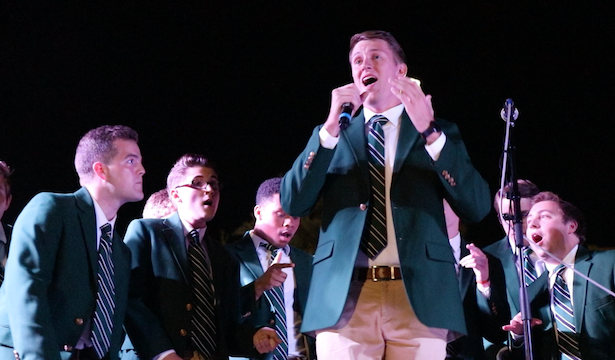 undefinedThe Yell Like Hell Pep Rally, one of the signature Homecoming events, was held Thursday night. The singing Men of Ohio and Marching 110 helped ramp up Bobcat spirit in anticipation for Saturday’s game. 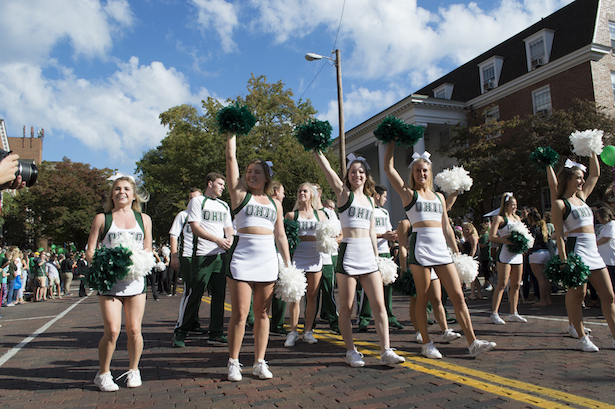 undefinedOn Saturday morning, the Homecoming parade transformed uptown Athens into a city of green and white. Thousands of people donning their best OHIO gear gathered on Union and Court Streets to strike it up with the Marching 110 and other parade participants. 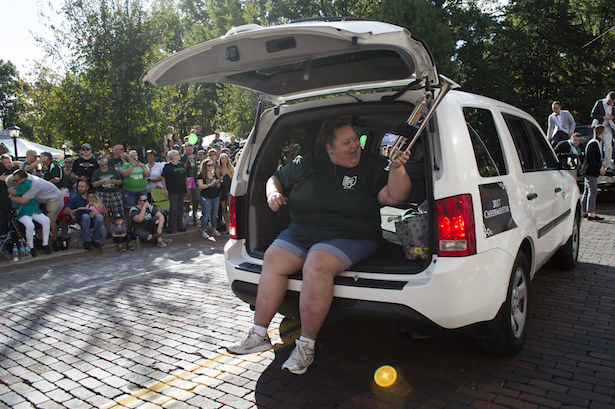 undefinedPerhaps the most engaging parade participant was this year’s Cheermeister Spirit Award winner Sheila Winland. Winland, BSS ’98, was a Marching 110 member during her OHIO days. As the official 2017 OHIO Cheermeister, she led thousands of Bobcats to “Stand up and cheer!” as the parade passed through uptown Athens. 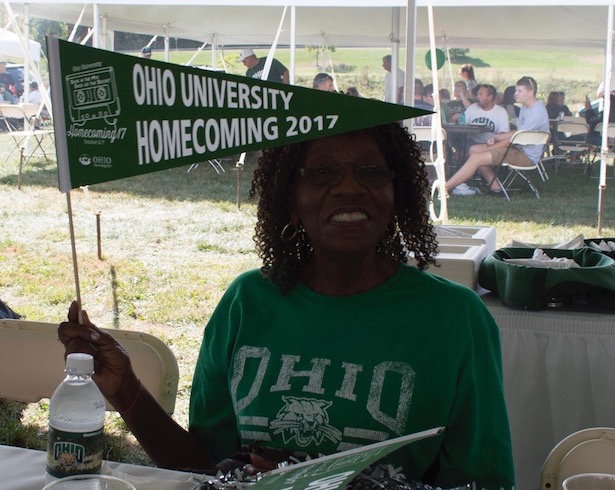 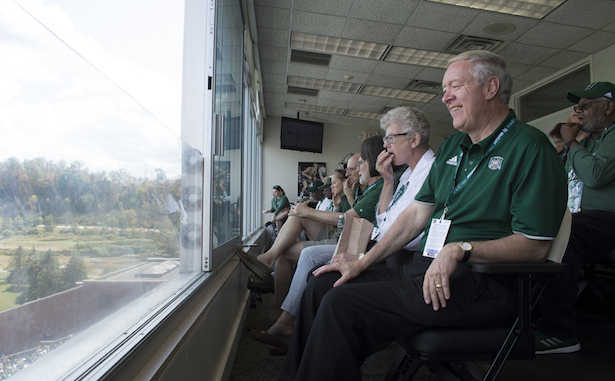 undefinedPresident Nellis and First Lady Ruthie Nellis were joined by Bobcats and friends for their first Homecoming game. 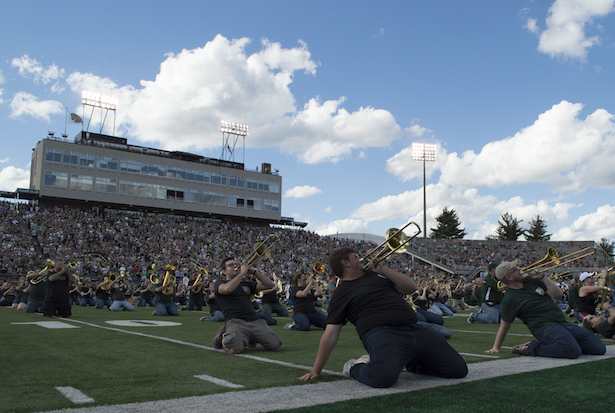 undefinedThough the Ohio football team fell 26-23 to Central Michigan on Saturday, Bobcats were in high spirits as the Marching 110 took the field for epic halftime and postgame shows. They joined forces with the enthusiastic Alumni Band to execute dazzling formations to the legendary music of rock band Chicago. View online Homecoming highlights and photos, as well as the Marching 110 halftime show.