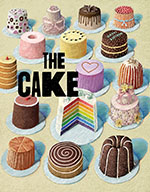 Illustration by: Punch and JudyTantrum Theater’s “The Cake,” begins June 6 and runs through June 24, with all performances at the Abbey Theater, Dublin Rec Center, 5600 Post Road, Dublin, Ohio.

Tantrum Theater will open its third season with the Ohio premiere of a new play, “The Cake” by Bekah Brunstetter, running June 6–June 24 at the Abbey Theater in Dublin.

“Love is patient, love is kind. It does not envy, it does not boast, it is not proud.” Della believes there’s no problem so big it can’t be solved while eating one of her perfectly delicious cakes. When Jen, the daughter of a dear friend, returns home to get married, Della is thrilled to bake the wedding cake — until she discovers Jen’s groom is not a groom, but a bride. Della is torn between deeply held faith and her love for Jen, who struggles to reconcile her own conservative roots with her liberal life. In a nation deeply divided on social issues, this new play is a delectable confection of humor, compassion and Southern hospitality. How do we love when the political meets the personal?

Playwright Brunstetter is a writer and producer on NBC’s critically-acclaimed “This Is Us.” Her other plays include “Going to a Place Where You Already Are” (South Coast Repertory), “The Oregon Trail” (Portland Center Stage) and “Cutie and Bear” (Roundabout Theatre Company). “The Cake” debuted last year at Echo Theater Company in Los Angeles, and the Los Angeles Times commended the play for exploring “human conflict from an insightful, slightly offbeat perch with understanding, respect and compassion for opposing points of view.”

Tantrum Theater’s production of “The Cake” is under the direction of Shelley Delaney, who returns to Tantrum Theater after playing Tammy Faye Bakker in 2016’s “Tammy Faye’s Final Audition.” Delaney is head of the Performance Program at the Ohio University School of Dance, Film and Theater. She has directed work at Centenary Stage Company, Monomoy Theater on Cape Cod and Brick Monkey Theater Ensemble, among others, and her acting credits include productions at the Cincinnati Playhouse in the Park, McCarter Theatre Center and Victory Gardens Theater, where she was nominated for a Joseph Jefferson Award.

The production’s creative team includes Scenic and Costume Designer Eduardo Sicangco, whose work has been seen at the New York City Opera, Goodspeed Opera House, Hartford Stage and with New York City Center's Encores! Series. Lighting Designer S. Watson is a graduate of Ohio University’s M.F.A. Lighting Design Program, whose credits include workshops for New York Stage and Film and many productions with Cincinnati Shakespeare Company. Sicangco and Watson are joined by Sound Designer Sharath Patel, who received a B.F.A. from Ohio University and whose work has been seen at regional theaters across the country, including the Seattle Repertory Theatre, the American Repertory Theatre and East West Players. The production’s assistant director is Ben Stockman, a recent graduate of Ohio University’s Professional Director Training Program.

Playing the role of Della is Merri Biechler, whose play “Tammy Faye’s Final Audition” was produced in Tantrum’s inaugural season. Biechler is the Assistant Director of the School of Dance, Film and Theater at Ohio University and has acted Off-Broadway, in film and on television. In the role of Jen is Constance Leeson, a recent alumna of Ohio University’s BFA Performance Program and a Columbus native. Joining her is fellow Ohio University Performance alumna Kelsey Rodriguez (Jen’s fiancée Macy), who spent the past year as an Emerging Professional Resident at The Milwaukee Repertory Theater and returns to the Tantrum stage after playing Ronette in “Little Shop of Horrors.” In the role of Della’s husband Tim is Brian Evans, who was previously seen in “Dancing at Lughnasa.” Evans has performed in regional theaters including CATCO, South Coast Repertory Theater and the Greenbriar Valley Theater, and teaches at Ohio University.

All shows will be performed at the Abbey Theater, Dublin Recreation Center, 5600 Post Road, Dublin, OH 43017.

There will be two pay-what-you-will preview performances for each production. Season flex passes are available at adult and senior rates. These four-ticket passes can be used in any date combination of the patron’s choice.