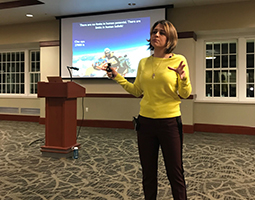 Think of something that seems impossible and take the first step.

That simple challenge, delivered at a three-day seminar, set Sara Safari on a pathway that took her to the top of the world’s highest mountains and that gave her life a new purpose.

Safari, whose accolades include author, advocate for women empowerment and recipient of the United Nations Association’s 2015 Global Citizen Award, shared her journey with the Ohio University community at the March 1 Women’s History Month keynote, during which she challenged those in attendance to take their own first step.

In a keynote speech titled, “Climbing Seven Summits to Empower Women,” Safari documented her quest toward her impossible – climbing Mount Everest, the highest above-sea level mountain on Earth. It was a journey that began on Mount Whitney, the tallest mountain in California, in the freezing cold winter during a climb that Safari said changed her perspective on overcoming and accepting her greatest fears. After stopping for the night, Safari said she was filling up her bottles of water when they leaked and drenched her main source of warmth, her sleeping bag. Safari described some of the fears she experienced that night: cold, loneliness, the dark and, most importantly, dying. She said surviving and conquering these fears have helped her conquer all the smaller fears that come with daily life.

After summiting Mount Whitney, Safari went on to climb another mountain in Ecuador before deciding to settle back into her routine life and questioning whether mountain climbing was even for her. While teaching at California State University Fullerton, Safari met Jeffrey Kottler, the founder of Empower Nepali Girls. A nonprofit organization, Empower Nepali Girls is dedicated to providing girls who are at risk for abandonment, abuse or neglect the opportunity to reach their goals and aspirations by providing scholarships and other mentoring programs.

As Safari began to learn more about the organization and the success stories of girls and young women who had been served by it, she was reminded of her own background. Born in Iran, Safari could relate to some of gender discrimination and hardships the girls in Nepal had experienced.

Safari decided to start climbing again, but this time with a different purpose. She began raising money for Empower Nepali Girls with every mountain she climbed. This was the motivation she needed to keep striving for her goals. She said she was no longer doing this for herself, but for the girls who needed her and to support the organization.

“This time it wasn’t about me proving to myself that I was strong and I’m capable,” Safari said. “This time was about 300 girls in Nepal who don’t have access to education. So, you can imagine how this time when I was training, it was coming from a different place.”

After preparing and training on smaller mountains, Safari again set her sights on her impossible – Mount Everest. In April 2015, Safari was climbing an ice wall near the top of the peak when a 7.8-magnitude earthquake hit. She described her fear enduring the earthquake’s aftershocks and avalanches. Nonetheless, she survived.

When Safari returned to the capital of Nepal, she saw the damage the earthquake had created. She had raised all this money to support Empower Nepali Girls, and now so much had been lost. Approximately 10,000 people died as the result of the earthquake with an estimated 100,000 children left homeless.

Safari’s drive to help kicked in, and she went out and bought whatever she could find to help these girls: blankets, pillows and food. Even after losing everything the girls were positive and strong, with one girl more concerned about Safari’s safety than everything she and her community had lost.

This strength and resilience helped them to continue moving forward. Even with the damage and destruction, the girls continued to grow and accomplish their goals. Every year, Safari returns to Nepal to see the progress the girls have made.

Safari encouraged those in the audience to contact her for more information on the opportunities to help Empower Nepali Girls.

“I really want to encourage all of you to think about the opportunity to travel to developing countries. It’s such a life-changing experience. This is when we realize how fortunate we are and how much access we have,” Safari said.

Elisabeth Rockamore, an Ohio University student who attended the keynote, said, “I thought it was really interesting to hear the in-depth parts of her story because I knew that she was a woman who climbed mountains for charity, but I didn’t know about the intricate details of her failures. I’m glad she shared her failures, about how she literally almost died multiple times. I admire her perseverance and everything she went through to raise money for these girls.” 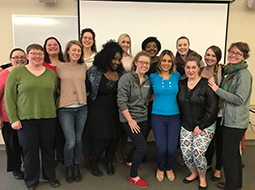 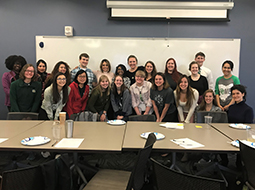 Photo courtesy of: Ohio University Women's CenterStudents from Ohio University's Russ College of Engineering and Technology pose for a photo with Sara Safari.