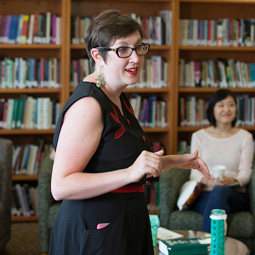 March is Women’s History Month and Ohio University’s Women’s Center is doing its part to celebrate.

The event is also sponsored by the School of Music, the Patton College of Education, the Russ College of Engineering and Technology, the College of Health Sciences and Professions, the College of Arts and Sciences, University College, the Office of the Vice President of Research and Creative Activity, the Scripps College of Communication, the International Student Union, the Latin Students Union, the LGBT Center, the Multicultural Center and Programs, Arts for Ohio, the Performing Arts and Concert Series, Sigma Delta Pi and the Black Student Cultural Programming Board.

“Tres Vidas continues the legacy of the festival for us to talk about really important issues that face women around the world,” said Dr. Geneva Murray, director of the Women’s Center.

With more than twice as many nominations this year than last year, Dr. Murray said she is excited to shine a spotlight on those who may get overlooked.

Social justice in the classroom and workplace, caregiving and outstanding community service are a few of the things women will receive recognition for at the dinner.

Any organization that co-sponsors the event will receive recognition as well as two tickets to the event. Admission is $15 and half of the proceeds will support the Ohio University Survivor’s Advocacy Program and the other half will benefit the Women Center’s Lactation Rooms Fund.

“Using Personal Stories of Sexual Violence to Fight for Policy Change” with Andrea Neutzling will take place from 11 a.m. to 1 p.m.  Saturday, March 24, on the fifth floor of Baker University Center. The event will focus on how survivors can use their stories to advocate for policy change. It is co-sponsored by the Ohio University Veterans and Military Student Services Center, Survivor Advocacy Program and the Campus Involvement Center.

A showing and discussion for the film, “Difret,” will take place at 6:30 p.m. Tuesday, March 27, in Seigfred Hall 519. Executive producer Angelina Jolie Pitt's award-winning drama is based on the true story of a young Ethiopian girl and a tenacious lawyer embroiled in a life-or-death clash between cultural traditions and their country's advancement of equal rights. The event is sponsored by Alden Library and is offered in collaboration with Salaam: Student Union of Ethiopian and Eritrean Heritage.

The Women’s Center, which has a mission of ending domestic violence, rape and other forms of sexual and relationship abuse, will take part in Take Back the Night, April 4-5.

A conference with workshops that talk about privilege and oppression, responding to rape culture, supporting your neighbor and how to go over bodies and boundaries, will take place from 3:30 to 7:15 p.m. Wednesday, April 4, in Baker University Center. The conference includes a panel discussion that will document the experiences of sexual assault survivors. It will be one of the rare times a program receives a University exemption from mandated sexual assault reporting.

After the workshops, Tim Mousseau will deliver his keynote speech titled, “Retaking Our Story: Reframing the Sexual Assault Conversation” at 7:30 p.m. at Walter Hall Rotunda. He will lead a conversation on the topic of sexual assault. He regularly talks about concepts of creativity, sexual assault prevention and innovation.

Take Back the Night activities continues with a resource fair featuring the Monument Quilt at 6:30 p.m. Thursday, April 5, in the Baker University Center Ballroom. At 7 p.m. survivors and allies will share their personal stories until the Take Back the Night March begins at 8 p.m.

“We are encouraging everyone to march regardless of gender identity,” Dr. Murray said.

Also taking place the same day is a name burning, where survivors can burn the name of their assailants. Like the panel and march, this event is exempted from mandated reporting to Ohio University. For the location of this event, email the Survivor Advocacy Program at survivor.advocacy@ohio.edu.

Collaborating with the Graduate College and OHIO’s Career and Leadership Development Center, the Women’s Center will also help out with the AAUW Start Smart Salary Negotiation Workshops on two days: Thursday, March 29, from 5 to 7 p.m. and Wednesday, April 18, from 11 a.m. to 1 p.m. Both workshops will take place in Baker University Center 230. To register in advance, visit http://tinyurl.com/AAUWsalary.

For more information about the Women’s Center, visit www.ohio.edu/womenscenter.