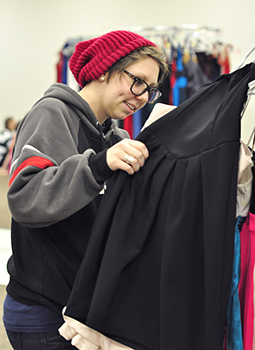 Kelley Johnson picks out a dress for her prom at the 2014 “Sisterhood of the Traveling Dresses” clothing giveaway.

Members of the Ohio University community and area residents are invited to be a part of an experience that for the past seven has been dedicated to sisterhood, but that this year is expanding to provide free prom formal wear to area high school girls and boys.

The eighth annual “Sisterhood of the Traveling Dresses,” sponsored by Ohio University’s Women’s Panhellenic Association (WPA), is underway and is collecting prom attire, including formal and semiformal dresses, suit jackets and blazers, dress shirts and pants, ties, shoes and accessories. The program will culminate in a no-charge prom boutique open to area high school students March 22-24 at The Market on State in Athens.

OHIO students, faculty and staff as well as area residents have been participating in the “Sisterhood of the Traveling Dresses” since the program debuted in 2011, digging through the backs of their closets to donate their gently-used dresses for area girls preparing for the prom and graduation ceremonies. With a goal of making the program more inclusive, this year the WPA is expanding its efforts, focusing on securing apparel for men as well as plus-size dresses.

Donations are being accepted now through Sunday, March 11, at OHIO’s Sorority and Fraternity Life Office, located in Baker University Center 330.

“We are really trying to make sure everyone has access to prom clothes,” said Sarah Richards, a junior at Ohio University and vice president of community development for the WPA.

According to Richards, in order to provide an assortment of formal wear styles and sizes, the WPA is donating funds to purchase a wider range of dress sizes and is collaborating with OHIO’s Interfraternity Council and Multicultural Greek Council.

In addition, the WPA is working with Tri-County Career Center to provide free altering and steaming services and women from OHIO’s sororities will be conducting free makeup and hair tutorials during the March 22-24 clothing giveaway.

“I just don’t think it should be a burden on anyone to pay an extensive amount of money for a night,” Richards said about providing these services to area young women and men. “That kind of ruins the experience. If you’re weighed down by the cost of formal wear, you’re not going to have the best prom experience that you can.”

Richards described her experience volunteering at last year’s clothing giveaway as empowering, sharing that she had the opportunity to assist a teenage girl who was feeling discouraged, comparing the way she looked to images of women in the media, find a dress. After an uplifting conversation with Richards, the girl left with a dress she loved.

“Giving these young women the opportunity to meet with women in college and build that mentor/mentee relationship, even just for one day, is impactful for both parties,” Richards said.

“For (Ohio University) students, it's a simple donation. You're getting rid of something you'll probably never wear again,” Leatherwood said. “But that 10 seconds spent donating a dress can make a great memory for someone.”