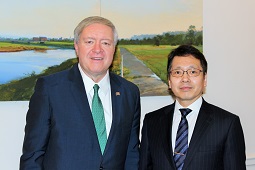 OHIO has been collaborating with IPU in several ways in recent years and was proud to host the following visitors:

One main collaboration that OHIO has been working with IPU on since 2011 is the Tsunami Relief Project. As part of this initiative, OHIO students who are studying at different universities in Japan assist with the relief efforts each year. Several OHIO faculty members have also assisted with the relief project since 2011. The Tsunami Relief Project was created by Christopher Thompson, associate professor of Japanese language and culture, and chair of the Department of Linguistics, as an enrichment opportunity for OHIO students studying abroad at one of four partner institutions in Japan, as well as for alumni living in Japan.

In addition, IPU has been sending undergraduates to the Ohio Program of Intensive English (OPIE) to study intensive English during the spring semester since 2016. Seven IPU students were on campus from February 24 to March 10.

Located in Takizawa, Iwate, Japan, IPU has an enrollment of approximately 2,600. The university opened in 1998 and employs OHIO graduate, Patrick Maher, who teaches English in the university’s International Relations Program. Maher graduated from both the undergraduate (BA ’02) and graduate (MA ’12) programs in OHIO’s Department of Linguistics.

During the February visit, the IPU officials met with OHIO faculty, staff and students to discuss the OPIE project, Tsunami Relief Project and potential areas for future collaboration.

In a meeting with OHIO President M. Duane Nellis, Vice President Ishido thanked OHIO for its support in the Tsunami Relief Project and explained the significant of the contributions of the OHIO students.

“Your students’ presence let the people know that they are not forgotten,” Vice President Ishido said. The people of the Iwate Prefecture are thankful to see the OHIO students each year, and the students have done a great deal to help with the relief efforts.

President Nellis and Vice President Ishido also discussed how the relationship between OHIO and IPU is benefiting students from both institutions.

During their visit to campus, the IPU representatives were hosted by the Department of Linguistics and took part in a wide range of other events. Among many extracurricular activities, the visitors attend a men’s basketball game in the Convocation Center.