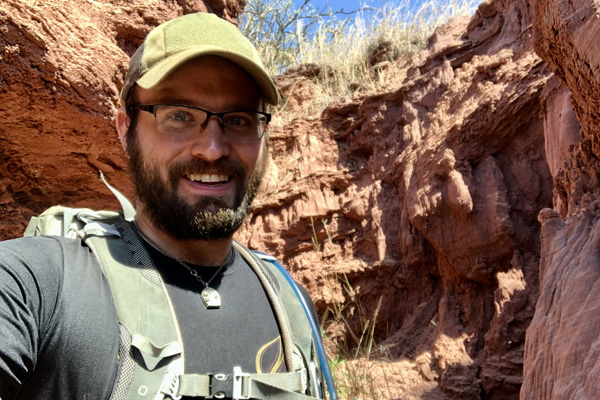 Professor Nancy Stevens substitute teaching in Eric Gorscak's undergraduate paleontology class might have been serendipity. But Gorscak didn't leave anything to chance after discovering he could build a career around his love for dinosaurs (and anatomy).

"Without meeting her in Dr. Alycia Stigall’s paleontology class, I probably would not have been on the career path I've been on. I owe Dr. Nancy Stevens and Dr. Patrick O'Connor both a huge debt of gratitude for where I am now!" said Gorscak, who has studied several new species of dinosaurs in Africa and now teaches anatomy to future doctors at Midwestern University in Downers Grove, Illinois.

Gorscak also continues his fieldwork and research on the dinosaurs that dominated the fauna of the Southern Hemisphere for nearly 70 million years before Earth's last mass extinction event.

How does someone who gets to spend time in places like Madagascar, Tanzania and Antarctica digging up fossils and interpreting the ecosystems in which they lived define career success?

"The fact that over the years I have developed a solid network of collaborators, colleagues, and ultimately friends all over the world I would consider a success. But also publishing and naming dinosaurs (and other extinct critters) new to science? My inner-kid is definitely wanting me to claim that as a success! Honestly, for me I think the true success is being able to adapt to and appreciate the different experiences along your career and learning from them," he said.

Gorscak's current research focuses on reconstructing evolutionary relationships and the history of extinct animals in response to deep-time changes of Earth.

"My focal group is titanosaurian sauropods, the large herbivorous dinosaurs with iconic long necks, as well as other extinct animals (e.g., theropod dinosaurs, sharks, turtles), through descriptions and comparisons of skeletal anatomy of new species and re-evaluating the anatomy of previously known species," Gorscak said. "My research is a combination of computational methods, fieldwork, and museum collections in order to test large-scale hypotheses concerning their evolutionary relationships, anatomical adaptations, and changes in their geographic distributions through time."

How did Gorscak make his dinosaur dreams come true?

Q: What path did you follow to get where you are today?

A: I would say mostly a traditional academic path. I did my undergrad and Ph.D. at Ohio University, followed by a postdoctoral appointment at the Field Museum in Chicago, and now I am an assistant professor of anatomy at Midwestern University just outside of Chicago. Each step of the way brought unique experiences and challenges that I am humbled to have as part of my career path.

Q: Did you do any study abroad, research projects, or other experiential learning opportunities?

A: During graduate school, I had numerous opportunities to develop and gain experience in paleontological fieldwork. This included trips to Tanzania for several summers, a season in Madagascar, and two amazing fieldwork opportunities in Antarctica that bookended my time in grad school (first and final years). My fieldwork experiences were complemented by research at museums in Kenya, Malawi, and here in the United States. I also had a fellowship, the Foreign Language and Area Studies (FLAS) fellowship, that had me enroll in Kiswahili classes for a year and learn more about East African culture, which was quite helpful with all my time spent in Tanzania and Kenya during grad school at Ohio University and beyond.

A: Probably submitting my first research manuscript for publication. It was describing a new dinosaur from Tanzania (Rukwatitan bisepultus), which would eventually be a chapter in my dissertation. When the peer-reviews came in and they were mostly asking for minor revisions, I knew that "I got this." Also, a year or two later, I was invited for a talk during a special symposium for the annual meeting of Vertebrate Paleontology in Berlin, Germany, which felt like an "I got this" moment and helped assure me that I was on the right path, especially early in my career while in grad school.

Q:  What was the hardest hill you had to climb (not counting Jeff Hill) at OHIO? And how did you overcome challenges or obstacles in your path?

A: The hardest hill was likely settling on what my dissertation would be about and planting the seeds for what my career, research-wise, would sprout into. I remember having so many different interests and directions that I could have gone into before settling with dinosaurs from Africa and what they can tell us about the evolution of ancient faunas from the Southern Hemisphere. The research questions and techniques I learned during my dissertation definitely helped with numerous projects I've been involved with and developing since I graduated from Ohio University in 2016.

A: My Ph.D. advisor, Dr Patrick O'Connor, is up there. He was a huge influence and encouraged me to explore different experiences, be it fieldwork or the FLAS fellowship. Dr Nancy Stevens is up there, too. (O'Connor and Stevens are both professors in the Heritage College of Osteopathic Medicine who also serve on the graduate faculty in the biological sciences graduate program.)

Q: What clubs and activities were you involved in?

A: During undergrad, I was in the Game Show Appreciation Society and the Ohio University Skeptic Society for a few years. I also played recreational soccer throughout my time at Ohio University, either through intramurals or with Athens community soccer. Otherwise, a good amount of time outdoors hiking at Strouds Run or Hocking Hills.

A: Too many to list, ha! Having gone to OHIO for both undergrad and graduate school, I have amassed so many memories with so many cool and interesting people and communities. But, I'll say you never forget the first time you experience O'Betty's for lunch between classes (Sophie, hold the mustard, with a large order of Cajun fries). It's one of the first places I hit up each time I go back to Athens!

A: If there is an interesting opportunity or experience that presents itself, take it.... You'll never know when or even if that opportunity will ever present itself again. Ohio University is a great place to discover cool opportunities and experiences — you just have to keep your eyes open.