Mark Witton Illustration depicting the early bird Falcatakely amidst nonavian dinosaurs and other creatures during the Late Cretaceous in Madagascar.

A Cretaceous-age, crow-sized bird from Madagascar would have sliced its way through the air wielding a large, blade-like beak and offers important insight on the evolution of face and beak shape in the Mesozoic forerunners of modern birds. An international team of researchers led by Ohio University Heritage College of Osteopathic Medicine professor Dr. Patrick O’Connor announced the discovery today in the journal Nature.

Birds have played a pivotal role in shaping our understanding of biological evolution. As long ago as the mid-19th Century, Charles Darwin’s keen observations on the diversity of beak shape in Galapagos finches influenced his treatise on evolution through natural selection. This fossil bird discovery adds a new twist on the evolution of skulls and beaks in birds and their close relatives, showing that evolution can work through different developmental pathways to achieve similar head shapes in very distantly related animals.

The new bird is named Falcatakely, a combination of Latin and Malagasy words inspired by the small size and the sickle-shaped beak, the latter representing a completely novel face shape in Mesozoic birds. The species is known from a single well-preserved, nearly complete skull, one that was buried in a muddy debris flow around 68 million years ago. Bird skeletons are rare in the fossil record because of their lightweight bones and small size. Bird skulls are an even rarer find. Falcatakely is the second Cretaceous bird species discovered in Madagascar by the National Science Foundation-funded team.

The delicate specimen remains partially embedded in rock due to the complex array of lightly built bones that make up the skull. Although quite small, with an estimated skull length of only 8.5 cm (~ 3 inches), the exquisite preservation reveals many important details. As one example, a complex series of grooves on the bones making up the side of the face indicate that the animal hosted an expansive keratinous covering, or beak, in life. 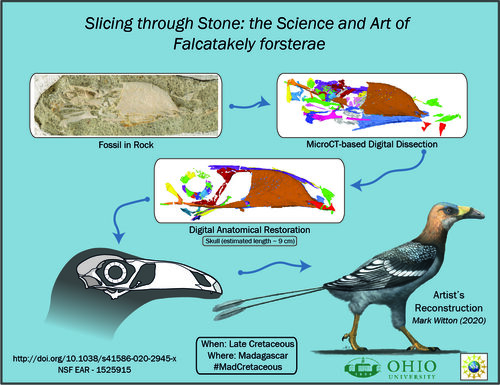 “As the face began to emerge from the rock, we knew that it was something very special, if not entirely unique,” notes Patrick O’Connor, professor of anatomy and neuroscience at Ohio University and lead author on the study. “Mesozoic birds with such high, long faces are completely unknown, with Falcatakely providing a great opportunity to reconsider ideas around head and beak evolution in the lineage leading to modern birds.”

Falcatakely belongs to an extinct group of birds called Enantiornithines, a group known exclusively from the Cretaceous Period and predominantly from fossils discovered in Asia. “Enantiornithines represent the first great diversification of early birds, occupying ecosystems alongside their non-avian relatives such as Velociraptor and Tyrannosaurus,” says Turner, an associate professor of anatomical sciences at Stony Brook University and study co-author. “Unlike the first birds, such as Archaeopteryx, with long tails and primitive features in the skull, enantiornithines like Falcatakely would have looked relatively modern.”

A life reconstruction of Falcatakely might leave one with the impression that this is a relatively unremarkable bird. But it is underneath the keratinous beak that the evolutionary intrigue lies. O’Connor and his colleagues couldn’t remove the individual bones of Falcatakely from the rock for study because they were much too fragile. Instead, the research team employed high-resolution micro-computed tomography (µCT) and extensive digital modeling to virtually dissect individual bones from the rock, with enlarged 3D printing of the digital models being essential for reconstructing the skull and for comparisons with other species.

“A project like this bridges disciplines ranging from comparative anatomy, paleontology, and engineering/materials science. Our partnership with the Ohio University Innovation Center was a key part of this process,” noted Joseph Groenke, laboratory coordinator in HCOM/BMS, a study co-author responsible for the physical and digital preparation. “Being able to see each of the bones as a prototype replica formed the basis for understanding the specimen and also in reconstructing it.” As the research progressed, it was quickly apparent that bones making up the face in Falcatakely are organized quite unlike those of any dinosaur, avian or nonavian, despite having a face superficially similar to a number of modern bird groups alive today.

All living birds build the skeleton of their beaks in a very specific way. It is mostly formed by a single enlarged bone called the premaxilla. In contrast, most birds from the age of dinosaurs, like the iconic Archaeopteryx, have relatively unspecialized snouts comprised of a small premaxilla and a large maxilla. Surprisingly, the researchers found this similar primitive arrangement of bones in Falcatakely but with an overall face shape reminiscent of certain modern birds with a high, long upper bill and completely unlike anything known in the Mesozoic.

“Falcatakely might generally resemble any number of modern birds with the skin and beak in place, however, it is the underlying skeletal structure of the face that turns what we know about bird evolutionary anatomy on its head,” noted O’Connor. “There are clearly different developmental ways of organizing the facial skeleton that lead to generally similar end goals, or in this case, similar head and beak shape.”

To explore how this type of convergent anatomy evolved, O’Connor connected with former OHIO PhD student Dr. Ryan Felice, an expert on skull anatomy in birds and other dinosaurs. “We found that some modern birds like toucans and hornbills evolved very similar sickle-shaped beaks tens of millions of years after Falcatakely. What is so amazing is that these lineages converged on this same basic anatomy despite being very distantly related,” noted Felice, lecturer in human anatomy at University College London (UCL). Dr. Felice completed his PhD in biological sciences in 2015, working with O’Connor to examine the tail evolution in birds. Felice has since gone on to complete a postdoctoral research position at the Natural History Museum in London, after which he began a tenure track position at UCL in 2018.

Falcatakely was recovered from latest Cretaceous-age (70-68 million years ago) rocks in what is now northern Madagascar, in what has been interpreted as a semi-arid, highly seasonal environment. “The discovery of Falcatakely underscores that much of the deep history of the Earth is still shrouded in mystery,” added O’Connor, “particularly from those parts of the planet that have been relatively less explored.”

Madagascar has always pushed the boundaries of biological potential. Indeed, the unique biota of Madagascar has intrigued natural historians and scientists across many disciplines, often framed in the context of evolution in isolation on the large island continent.

“The more we learn about Cretaceous-age animals, plants, and ecosystems in what is now Madagascar, the more we see its unique biotic signature extends far back into the past and is not merely reflective of the island ecosystem in recent times,” O’Connor said.

“The discovery reported by Drs. O’Connor and Felice and their collaborators is a remarkable contribution that opens new vistas into our understanding of evolution and species diversity,” said Dr. Joseph Shields, Ohio University’s vice president for research and creative activity. “This work highlights the role of Ohio University faculty and students in conducting research on sites around the globe, to advance our understanding of fundamental questions in natural history.”