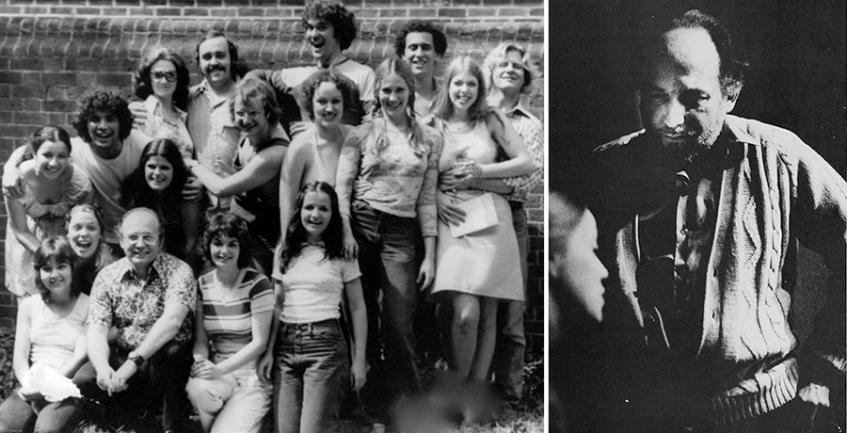 Robert "Bob" Hobbs pictured in the front row of a group picture of the M.F.A. theater class of 1975, and in the Athens Yearbook, 1974. Group photo courtesy of Alan Safier.

Robert L. Hobbs, who passed away July 24, 2017 at age 88, spearheaded a world class Professional Actor Training Program, transforming the way acting was taught at OHIO ever since. Despite his relatively short stay in Athens, he taught at Ohio University from 1969-1975, his impact was felt by many of his students well into their careers.

He was married to Elizabeth (Liza) Thomes Hobbs from 1950 until her death in 2014, and spent a good portion of his retirement on family property in Maine.

Hobbs studied with Robert Lewis, the American actor, director, teacher, author, and founder of the influential Actors Studio in New York, as well as the celebrated Alvina Krause, the so-called “maker of stars.” Hobbs earned an undergraduate degree from Bates College, an M.F.A. from the University of Washington, and a Ph.D. from Northwestern University.

He was recognized at one of the country’s leading acting teachers, besides his leadership in the professional actors training program at OHIO, he also developed training programs at Duke University, Boston University, and the University of Washington. Along with other master teachers from across the United States, he founded the League of Professional Theatre Training Programs. His students went on to play leading and featured roles on Broadway, off-Broadway, in Hollywood, on television, and in various League of Resident Theatres (LORT) stages all across the United States.

“Bob Hobbs was the greatest teacher I’ve ever had in my entire life, bar none. I wouldn’t be half the actor I am now without him. His training meant everything to my career,” recalled Alan Safier.

Safier studied acting in the 1970s, receiving his M.F.A. at OHIO in ’75, working closely with Hobbs during his final years teaching in the theater program. Safier spent upwards of ten hours each week with Hobbs, and recalls his first impressions of his mentor were of his high levels of energy.

“I think he developed this energy consciously as part of his classroom teaching persona. One evening I had the chance to have dinner with Hobbs and his wife when my mother was visiting Athens. It was just the four of us, and he was so mellow and conversational outside the classroom, it was surprising and we had such a great evening. That changed my perspective on him.”

Safier recalled learning from Hobbs the importance of playing actions, on stage. “He would always ask us, ‘what are you doing on stage? Assign an infinitive verb to what you’re doing on stage.’ Hobbs taught us that acting is not about reaction, but about action—to chastise, to lure, and everybody’s favorite…to seduce.”

He was equally at home in the worlds of professional and academic theater. Over his career, Hobbs headed professional programs in three different member universities of the League of Professional Theatre Training Programs, and his acting workshops were popular throughout the United States at conservatories, universities, and theatre conferences. For over 50 years, he was a producer, artistic director, director, and actor in repertory and stock theatres throughout the United States, and his book Teach Yourself Transatlantic: Theatre Speech for Actors, Mayfield Press (1986) was a staple in many classrooms.

Jim Niesen, Co-Founder of Irondale Theater in Brooklyn, studied with Hobbs from 1972-74. Afterwards, he moved to South Carolina landing a job at Long Wharf, in repertoire in ’77. Eary on he and his wife, Barbara MacKenzie-Wood, knew they wanted to strike out on their own, deciding to establish Irondale Theater in 1983 with a mix of production and education.

“There are many ways, but you have to look for the way that works for you,” said Niesen, quoting his mentor.

Alan Rust (M.F.A. ‘73), artistic director of the Monomoy Theater, and a professor of theatre at the University of Hartford, credits his success to Hobbs’ artistic guidance, who he studied with at OHIO, from 1971–1973.

“Between undergraduate and graduate school, I was working as a page at NBC Studios, working on the Tonight Show, and others, but I really just wanted to be an actor. I auditioned at Ohio University, feeling certain I wasn’t going to get in. Moving to Athens from Manhattan was quite a shock. Hobbs’ opening lecture which was four hours long, non-stop! Afterwards I felt like I’d been run over by a train... It was amazing. I chose Hobbs over Johnny Carson, and I’m glad I did,” said Rust.

Probably the most significant of Hobbs accomplishments at OHIO, according to Rust, was how he compelled the entire acting program toward professional training, at a time when acting wasn’t recognized as a viable form of academic or professional study in most places. His teaching created one of just half a dozen graduate level degrees of its kind in the country, becoming the League of Professional Actor Training Programs, which he was instrumental in creating.

“He was quite extraordinary! He taught us to be artists. It was no longer play practice, but artists who would have a lifetime’s career. Even after he left, his replacements came in on that higher level at Ohio University. It’s remained geared toward professional training ever since.”

Dennis Predovic (B.F.A. ‘72), longtime actor and voice actor who appeared in TV series such as Mathnet, Law & Order, The Sopranos, voiced a character in the game Grand Theft Auto IV, and can be heard nightly on the National Broadcast of the PBS Newshour.

Predovic studied alongside Marsha Korb (B.F.A. ‘72) in Hobbs’ acting studio, and following graduation, the couple married at the Galbreath Chapel. Hobbs was in the young couple’s wedding party.

Predovic and Korb live in Nyack, NY, “where we raised our actor son, and taught acting, built a theatre program, and directed at a small private school for 15 years. We always passed along Hobbs advice to our talented students. Don't aspire to be a star, honor your passion with commitment and do your work as an artist. Bob taught us to be artists, not just out of work actors. We are who we are because of our mentor and dear friend,” said Predovic.

Erik Fredricksen, was the chair of the Department of Theatre & Drama at the University of Michigan from 1990 until 2005 and a founding member of both the Society of American Fight Directors and the Nordic Society of Theatrical Combat.

“I auditioned in late ’68 for Arthur Wagner, then head of the theater program at OHIO on my way for an interview with Tulane’s Directing Program. I was accepted to both, flipped a coin, and it came up heads—that was Ohio University. When I showed up it was not quiet, gentle Wagner, but Bob Hobbs! I was immediately impressed by the presentation, the ‘re-audition,’ and his coaching.  It was the right choice,” said Fredricksen.

On an M.F.A. assistantship, Fredricksen worked closely with Hobbs, and also taught voice classes with Virginia Hahn. Upon graduation he faced an uncertain choice among several competing offers for work, finally choosing a fellowship with the Guthrie Theatre in Minneapolis on the insistence of Hobbs. The three seasons Frederickson worked at the Guthrie shaped the course of his theatrical career, exposing him to then resident choreographer at the Stratford Theatre and one of the most influential figures in the art of modern stage combat, Patrick “Paddy” Crean.

“I thank Bob Hobbs for not letting me play the ‘easy action’ of a secure role. So much of anything I’ve done as an actor, theatrical fight arranger in New York and Los Angeles, and academic teaching, it is very much a result of Bob Hobbs,” said Fredricksen.

Outside the theatre, Hobbs was dedicated to social justice. He and his wife Liza spent their early married years promoting racial integration at Hull House in Chicago with the American Friends Service Committee (Quakers). Post-retirement, he wrote and spoke to civic groups about gay rights issues particularly the damage of conversion therapy, and was also a strong supporter of Americans United for Separation of Church and State and the American Civil Liberties Union.

Hobbs was laid to rest near his wife and parents in Framingham, Massachusetts, where he was born.