Virtual reality project enters the life of a patient in Appalachia 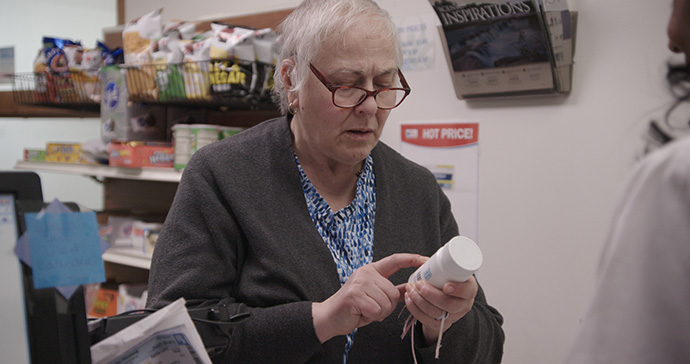 Lula Mae Tate is a woman from Appalachia in her 70s, who has diabetes. She tries to keep her disease under control on a limited income, but life keeps interfering.

Lula Mae is an invented person, but the challenges she faces are real for many in Appalachia, where diabetes rates are above the national average. She’s the main character in an innovative series of virtual reality videos created by an interdisciplinary team at Ohio University, headed by co-investigator Elizabeth Beverly, Ph.D., assistant professor of family medicine at the Heritage College of Osteopathic Medicine, and holder of the Heritage Endowed Faculty Fellowship in Behavioral Diabetes, Osteopathic Heritage Foundation Ralph S. Licklider, D.O., Research Endowment.

In the videos, we see Lula Mae as matriarch of her extended family, caring for her grandchildren and son, a disabled veteran. Faced with a choice between what’s best for her family or her health, she’ll choose her kin. She can’t always get to her doctor’s appointments; when she does, she can’t always understand what the doctor is telling her, but she’s hesitant to bother him with questions. Her diabetes may be affecting her hearing, making it hard to follow her pharmacist’s instructions, but she’s reluctant to say so.

“Lula Mae is somewhat timid when it comes to talking with the health care provider, so she doesn’t really communicate well,” Beverly explains. “And I don’t know if it’s embarrassment or shame, but she’s definitely fearful of disappointing her physician, so she doesn’t want to say certain things.”

The VR project is designed to educate health care professionals about aspects of Appalachian culture and help them recognize implicit bias, which may complicate care provision to diabetes patients in the region. Cultural factors include a strong sense of community and “taking care of one’s own,” pride in self-sufficiency, and a wariness of those, including health professionals, who come to the region from elsewhere.

The VR series is part of a larger project, “Medicaid Equity Simulation,” being funded by a sub award from the Ohio Department of Medicaid’s Medicaid Technical Assistance and Policy Program (MEDTAPP) for $924,631. This includes $453,069 from MEDTAPP and $471,562 in matching funds from the university.

This project is administered by the Ohio Colleges of Medicine Government Resource Center.

All of the VR technology for the project is being developed via the Ohio University’s Game Research and Immersive Design (GRID) Lab.

“Virtual reality simulations are increasingly recognized as a highly effective type of interactive learning that could revolutionize medical education,” said Ken Johnson, D.O., executive dean of the Heritage College and Ohio University chief medical affairs officer. “This project brings together talented and creative people from disciplines in science, medicine and the humanities to produce a learning experience that will help health professionals understand how biases they may not even know they have can hinder them from providing the best care.”

Co-primary investigators on the overall project are John McCarthy, Ph.D., associate professor of communication sciences & disorders and interim associate dean for research and graduate studies at the College of Health Sciences and Professions, and Deborah Henderson, Ph.D., professor and director of CHSP’s School of Nursing. Another series of VR episodes deals with opioid abuse; this CHSP-led effort features the invented character Destiny.

The project is strongly interdisciplinary, with participants from the Heritage College, CHSP, the Scripps College of Communications, and the School of Dance, Film and Theater. Beverly conceived the Lula Mae character, then worked with collaborators to create shooting scripts for six vignettes illustrating different issues that might arise for health professionals. Someone who puts on the VR goggles steps into episodes in which Lula Mae interacts with her physician, her pharmacist and her family.

This creative approach was also used with the character Destiny, who is a female, 20 weeks pregnant, with a history of opioid use and currently in medication assisted treatment (MAT).

Eric Williams, professor in the newly re-named J.W. McClure School of Emerging Communication Technologies, contributed to scriptwriting and directing on the project. He said developing stories that are both educational and engaging was a true team effort.

“We were given general overviews – ‘We need to get from here to there,’” Williams recalled. “For instance, we want to understand that Lula Mae sometimes makes decisions that are best for others over what is best for herself. So we brainstorm a little bit, and say, ‘OK, what if she’s volunteering at a food pantry, and when she’s given the opportunity to take home some good food, if she sees somebody else in greater need, she gives that food away?’ And then Liz (Beverly) would say, ‘OK – what if it’s this sort of food, or what if it happens at the end of the day when she’s tired, and she’s not thinking clearly because she hasn’t been eating right?’ Liz has given us directions and points that we need to hit, but then has given us the freedom to put our creativity in between those points.”

“In filmmaking parlance, you don’t want to be too ‘on the nose,’” he explained. “We didn’t want to make it a commercial. One of the things we use in film is, ‘Show, don’t tell.’ And we had to work that in – how can we visually demonstrate some of these points without having someone just look at the camera and say, ‘This is what you should be paying attention to.’ We place things in the scene, and then we add filmmaking techniques to make it interesting, to make it engaging, to make it look more like a movie, to make it feelmore like a movie. The goal here is to have educational content that is so engaging, and so high-quality, that you could almost just watch it and enjoy it without realizing you’re being taught something.”

The vignettes are shot in 360-degree surround – turn your head, see a different part of the scene – and in some cases let the viewer talk interactively with Lula Mae or Destiny. At a conference scheduled for June 29 at Ohio University in Athens, Beverly will have care providers experience the vignettes, interspersed with discussion. Participants will be surveyed for levels of cultural self-efficacy and diabetes attitudes before and after viewing the simulations, and to find out how present they felt in the VR world. The conference, sponsored by the Diabetes Institute and the College of Health Sciences and Professions, is titled “Using Virtual Reality to Visualize Diabetes in Appalachia.” The views expressed in the presentation are solely those of the creators and do not represent the views of the state of Ohio or federal Medicaid programs.

The VR series – which will become the property of the Ohio Department of Medicaid at the end of the MEDTAPP grant – will have an accompanying website to provide linked educational resources for health care providers. It also may help inspire other team efforts, using talents and expertise from multiple fields to improve health care in southeast Ohio.

“This has been the biggest interdisciplinary project that I’ve been a part of,” Williams said. “I’ve done a lot of smaller collaborations, but this has been the most fun as far as getting everybody on the same team. And it’s a great team! I’m amazed at how well everybody works together. To me, this is exactly what a university like Ohio University should be doing.”