A medical school alumnus and his wife, both with long-standing ties to the Ohio University Heritage College of Osteopathic Medicine, have pledged a $100,000 gift to the college’s general support fund. In recognition of their generous gift, a second-floor meeting space in the college’s new medical education facility, Heritage Hall, which is now under construction on the Athens campus, will be named the Dr. Thomas (’83) and Barbara Anderson Conference Room.

Dr. Anderson said he and his wife are excited to support the new learning facility and the students it will serve, and are “both so very pleased with the uniqueness of the building, which will heighten the experience for our students and possibly promote more to apply.”

This is only the latest of many gifts the Andersons have made to the medical college. The couple had previously contributed more than $325,000 to college beneficiaries including the Breast Education Screening & Navigation Program run by Community Health Programs; the Sherman Brooks Memorial Scholarship endowment; and the Learning Resource Center.

“Tom and Barb’s generous and long-standing support has enabled incredible progress, unprecedented outreach and, most importantly, student success. I’m so pleased that we will be able to recognize their meaningful engagement through a named conference room in our new medical education facility,” said Ken Johnson, D.O., chief medical affairs officer at Ohio University and executive dean of the Heritage College. “The Dr. Thomas and Barbara Anderson Conference Room will serve as a reminder of the impact that Heritage College alumni can achieve in partnership with the college.” 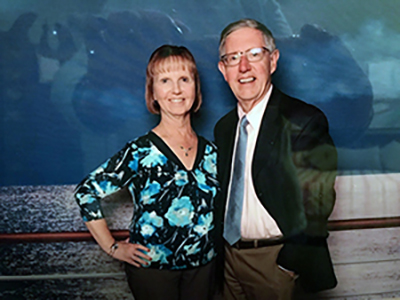 An oncologist who serves as medical director at OhioHealth’s Hobbs Radiation Oncology in Columbus, Dr. Anderson remembers starting his medical training in 1979, three years after the college opened, “when we had only Grosvenor Hall for classrooms and labs.” Since graduating, he has compiled an impressive record as an engaged alumnus, which includes serving from 2006-2016 on the board of the college’s Society of Alumni & Friends, including a stint as president; he has also been a member of the Ohio University Alumni Association Board of Directors, and was elected in 2019 to The Ohio University Foundation Board of Trustees. Since 2009, he has served on the Osteopathic Heritage Foundations board.

Barbara Anderson, he said, also has a deep connection to the college, having served “as one of the first medical assistants at the Grosvenor Hall Clinic in 1978.” The medical school’s faculty practice, now known as OhioHealth Physician Group Heritage College, initially operated out of Grosvenor Hall and was incorporated as an Ohio business that year.

“I was well aware how fearful I was when moving to a new location to start clinical rotations and not being familiar with the hospital and its staff,” Anderson explained. “For about 12-13 years, my wife and I hosted a welcome event in our home for the incoming new students as they would begin their clinical rotations. It was our pleasure to host them, and from this opportunity, we became more engaged with the college and our local osteopathic family.”

Given the Andersons’ connections to the region, their gifts to the college over the years have included strong support for its health care outreach efforts. Noting that Barbara was born and raised in southeastern Ohio and he in eastern Ohio, Anderson said both “are very passionate about the need for health care, screenings and immunizations for that area and are so very pleased with the care and mobile vans that the Heritage College provides to its residents.”

Anderson said he’s very proud of the “tremendous growth of our college, its students, programs and their successes,” and encourages all alumni to stay closely involved with the college.

“I do have the opportunity to meet students from many osteopathic colleges, and consistently, the students from the Heritage College have demonstrated significant academic abilities and have a strong academic base in their training programs,” he said. “They are taught wonderful skills in establishing excellent rapport with patients and office staff.”