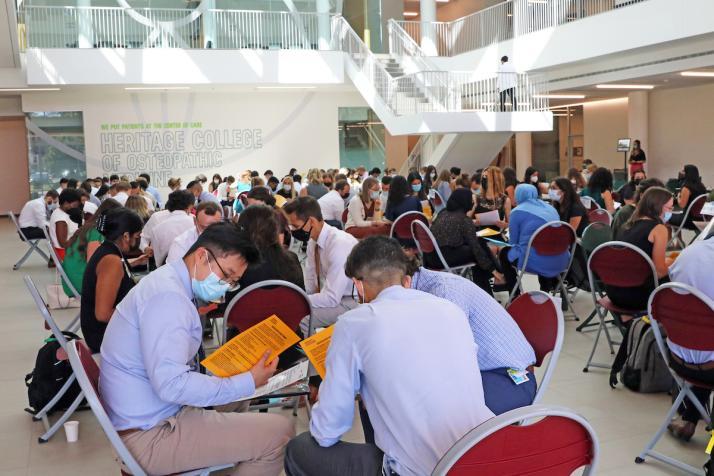 If you walked into Heritage Hall on Friday, Aug. 12, you would not have been greeted by the normal scene. Instead, incoming medical students from the Class of 2026 were sitting in small groups surrounded by tables labeled with signs like “bank,” “jail” and social service agencies. The tables were staffed by members of the Heritage College of Osteopathic Medicine and Athens area community service organizations. 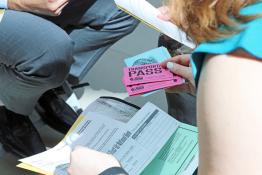 Each student was assigned a family unit and a role, from little children to older adults, within that family. The families received a packet containing identification, money and other materials needed to survive. Students then acted out their role, heading to different tables based on the scenario provided to their family unit. For example, those acting as children had to attend school, and those with jobs headed to work.

This elaborate, interactive workshop called “Rethinking Poverty” was hosted by the Office of Rural and Underserved Programs as a way for participants to gain a sense of what it’s like to live with poverty - whether it is with limited funds, having a low income or living month-to-month.

“Sometimes people associate poverty with a lack of desire to improve their circumstances. ‘Just get a job, just work harder.’ This experience is meant to try to break down some of those stereotypes that poverty isn’t a personal failing, that it is a result of inequality, inequities and social structures that inhibit people and create unnecessary barriers for people,” said Sharon Casapulla, director of education and research.

Casapulla said the workshop, which was developed by the Missouri Community Action Network, was designed to build awareness and provoke discussion about social determinants of health, as well as the implications of living in under-resourced communities. 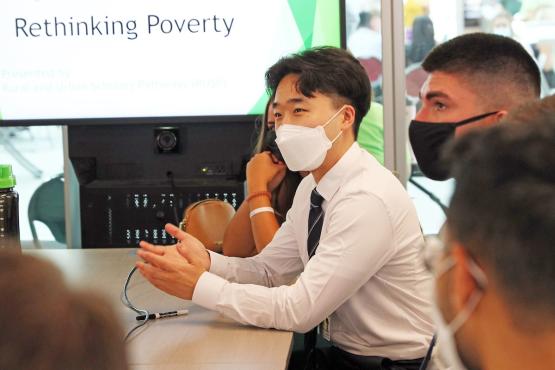 “Being aware of what is in the area and having the ability to suggest resources to those that might need them,” is one takeaway Sarah Grinstead, a first-year Heritage College student, learned during the workshop.

Organizers hope students walk away from the experience instilled with compassion and a new perspective that they can carry with them when they become physicians.

“I believe we all carry preconceived notions and personal biases, especially when considering people who differ from ourselves,” said Mari Hopper, associate dean for preclinical education. “Therefore, a major focus of the educational process is to raise awareness, promote understanding and tolerance, and encourage development of personal and professional values that optimize patient care.”

During the workshop, each 16-minute increment of time was the equivalent of one week for the scenario. So, anyone with a job, for instance, had to remain at the designated table for a certain number of minutes before they could do their weekly errands. The scenario played out over three 16-minute weeks. When they were done role playing, students gathered in small groups for a facilitated discussion to reflect on what they learned.

The workshop was based on real situations and family dynamics. One student acted as a grandparent with limited mobility who was unable to work and was left home during the day while her child and two grandchildren went out to work and school.

One student sat in the section labeled “jail” because they took a gun to school and were waiting for their family to come bail them out. At the community action agency table, another student spoke about how their grandson had recently been diagnosed with ADHD and how they were feeling the stress of additional medical bills needed to help him. Another stood in line at the pawn shop talking about how their work had recently fired a bunch of people, including them.

“I like how instead of just telling us about what it would be like to be in that situation, we were put in a simulation,” said Alyssa Rice, an incoming student who participated in the workshop. “You could feel ‘Oh, I’m stressed that I can’t have time to go to work and make it to the grocery store and watch my child,’ which I think was the best part of the event.” 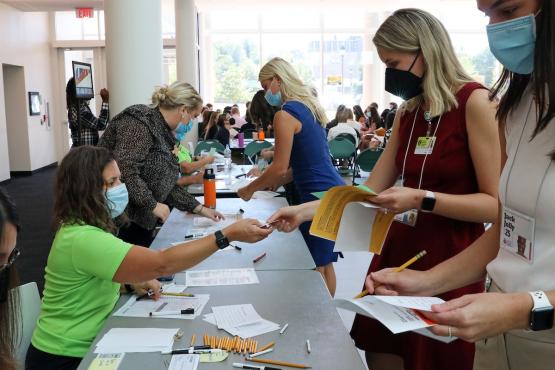