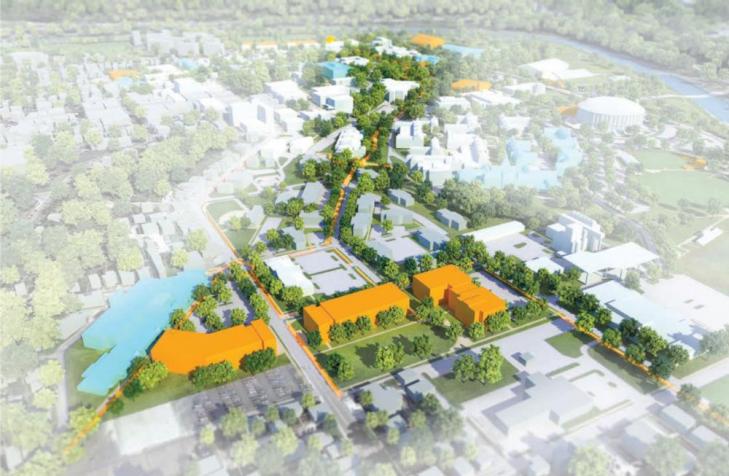 (ATHENS, Ohio) Members of the first entering class at the Ohio University College of Osteopathic Medicine still remember the construction work that was going on around them in the fall of 1976, when they arrived to start classes in unused student residence halls that were being renovated into a medical school. The Heritage College of Osteopathic Medicine is set to leave those refurbished dorms behind within the next six years, as it moves into newly constructed, purpose-built facilities.

At the Aug. 25 meeting of the Ohio University Board of Trustees, the board approved the university’s six-year capital improvement plan for FY 2017 – FY 2022. This plan features a number of important renovation and construction projects – including a transformational project for the Heritage College of Osteopathic Medicine that will move the college into new facilities.

The university’s comprehensive master plan, approved by the trustee board in March of 2016, shared a vision of creating a new green along the West Union Street Corridor. The capital improvement plan, which articulates project timing and funding, includes the first phase of the Heritage College transformation, anticipated to cost $65 million. This phase of the project will move the medical school out of its current home on the university’s West Green and into a new building that will anchor the Union Street Green.

“I’m excited about this project, and I want to thank the trustees for moving it forward by approving the capital improvements plan,” said Heritage College Executive Dean Kenneth Johnson, D.O. “For the last 40 years, our buildings on the West Green have housed the college in Athens as we’ve gone from one campus to three, grown from 24 students to an incoming class 10 times that size, built up our research component, and strengthened our community outreach. We’re now in the midst of the most significant period of growth and change in our history, and these new facilities, designed to meet the needs of a world-class medical college, will be a necessary cornerstone of that transformation as it continues to move ahead.”

According to material presented to the trustees, the Heritage College’s current facilities “are undersized, inefficient and no longer adequate for HCOM’s educational, research, and public-facing clinic needs.” The strategy to replace them, described as a “university transformational project,” will involve “multi-phases to replace academic, student support, research, and public-facing clinic spaces.” The vacated West Green buildings, including Irvine Hall, Grosvenor Hall, Grosvenor West and Parks Hall, can be repurposed, the plan says.

These buildings were all constructed between 1962 and 1965 as student residence halls, but were renovated into facilities for the medical school, which welcomed its first class in September 1976.

Phase one of the Heritage College transformation is the largest new construction project included in the current six-year capital plan, other than the university’s ongoing replacement of its student resident halls. The trustees will probably be asked to approve the design portion of phase one in late 2016 or early next year, according to Shawna Bolin, director of university planning and space management Design is expected to take nine months to a year, with construction to begin sometime after that.

The $65 million in funding for the first phase of the project – which focuses on academic space – comes from a combination of debt financing and Heritage College working capital. Pending trustee approval, it is expected that some donor funds will help cover the debt service.

Another Heritage College project, slated for construction next year at the college’s Dublin campus, is the Medical Education Building 2 Room 100 renovation/buildout. The trustee board has approved $650,000 in expenditures for this project, of which $75,000 is for design and $575,000 for construction. The Heritage College is providing $350,000, with the remaining $300,000 coming from the Division of University Advancement.

The project will build out approximately 2,000 square feet of shell space for offices to be used by the Heritage College and University Advancement. The design phase is scheduled for September-November of this year, with construction set for January-May 2017.