NIH funds faculty research into how cancers grow and spread 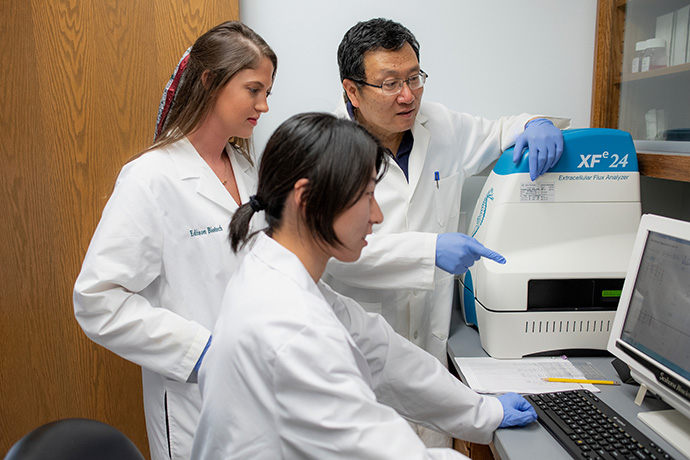 A research team led by Xiaozhuo Chen, Ph.D., biomedical sciences faculty member at the Ohio University Heritage College of Osteopathic Medicine, has already learned a good deal about the ways in which an important molecule found in all living organisms aids the growth and spread of cancer cells. With a $450,487 grant from the National Institutes of Health, Chen and his colleagues aim to learn more – and perhaps discover clues to new cancer treatments.

Chen, an associate professor of molecular and cell biology at the Heritage College and an associate investigator with Ohio University’s Edison Biotechnology Institute, is principal investigator on an NIH-funded project focused on ATP (adenosine triphosphate), which he called “one of the most magical and wonderful molecules in our body.” He said the body is constantly producing, using and recycling large amounts of ATP, known to scientists as the "universal currency of biological systems" in which chemical energy is stored, transferred and used by cells.

Given its status as the workhorse energy molecule for normal cells, it’s not surprising that ATP plays a similar role for cancer cells. For a tumor to grow and metastasize, for example, it needs energy to split off individual cancer cells from the tumor, so they can enter the bloodstream and travel to other parts of the body. “It turns out that ATP plays a significant role in cancer cells’ growth, drug resistance and also in their spread,” Chen explained.

“Dr. Chen’s work investigates a novel means by which cancer cells proliferate and metastasize, which could have important implications for developing novel anti-cancer therapies,” said Darlene Berryman, Ph.D., R.D., L.D., Heritage College associate dean for research and innovation. “He is also providing multiple opportunities for students to take part in meaningful biomedical research experiences, which is not only an emphasis of this NIH funding mechanism, but also a benefit to our larger university community.”

Rather than looking primarily at ATP’s well-known function in energy production, Chen’s research focuses more on the molecule’s role in signaling – the carrying of chemical messages among and within cells – and on how a cancer cell pulls ATP from its surroundings and then releases it inside to power different cellular activities. ATP outside the cell membrane is called extracellular ATP, or eATP.

Building on research done by students

Cao’s thesis looked at the role eATP plays in lung cancer tumor cells splitting off from each other and migrating to other parts of the human body, spreading the cancer through metastasis. She found that eATP can induce the early steps needed for metastasis, such as the splitting off of tumor cells and the development of small protrusions that these cells use like tentacles to move. She also found a previously unknown component in metastasis, in which cancer cells “drink” eATP from their surroundings (called the tumor microenvironment) by a process known as macropinocytosis; this ingestion of eATP by the cell enhances the cell-separation process and speeds up metastasis.

Cao’s study also found that turning off the SNX5 gene using CRISPR gene-splicing technology blocked macropinocytosis and reduced eATP levels, which are much higher among cancer cells inside a tumor than they are in healthy tissue. The gene knock-out also slowed the cancer cells’ growth rate, reduced migration of cells from the tumor and slowed the growth of the tumor in animals. This could be significant for cancer treatment, as metastasis is responsible for up to 90 percent of cancer-related deaths.

Evers’ work compares the mechanisms by which ATP induces metastasis to those of another, better-known metastasis inducer, TGF-beta. Her preliminary data has shown that at biological concentrations, ATP is able to evoke greater cancer cell migration and invasion, making ATP a potential target for anticancer therapies.

Evers’ research investigated the possibility of making genetic modifications that would cause tumor cells to produce ATPase, a category of enzymes that catalyze dephosphorylation, a chemical process in which energy is produced by the breakdown of ATP into component molecules. If the cell could be made to express ATPase on the outer surface of its membrane, this could result in less ATP being available for initiating and carrying out processes necessary for metastasis.

Looking at how cancer cells use ATP

Chen’s new research aims to learn more details about “exactly how eATP is internalized and then released by cancer cells,” according to a description provided to the NIH. For example, the description notes, scientists don’t know if the process of eATP internalization and release is a genetic trait that’s shared by all types of cancer cells. Chen said it’s known that internalized eATP helps cancer cells develop resistance to anti-cancer medications, but the details of how are largely unclear.

Chen’s hypothesis is that most types of cancer cells take in eATP and release it inside themselves to power tasks that help the cancer thrive and spread. He plans to compare how prevalent this process is in different cancer types, examine the specific mechanisms of internalization and release, and study how eATP mediates drug resistance in cancer cells.

The project, he told NIH, “will lead to deeper understanding on how ATP affects cancer metabolism, growth and proliferation, and drug resistance, leading to development of novel and more effective anticancer therapies that reduce drug resistance and prolong cancer patients' survival.”

Both Evers and Cao said they have found working with Chen rewarding and plan to continue in this area of science. Heading into post-doctoral work, Cao said, “I want to do further research on cancer cells.” Evers said she’s already applying to doctoral programs in biology for next fall. “It’s been really exciting, and I’ve learned so much,” she said.