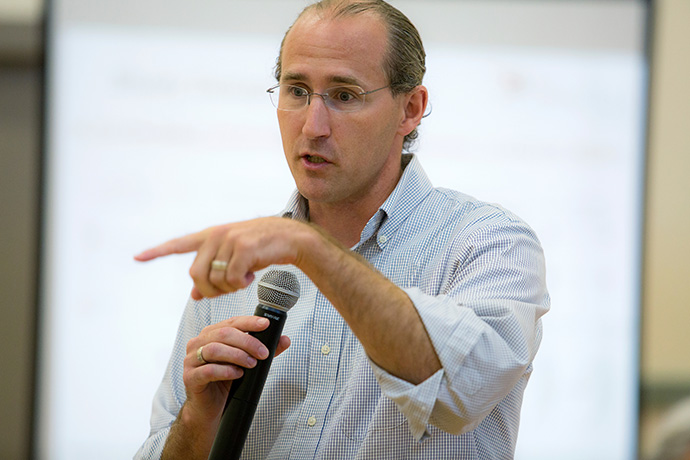 A study recently published by researchers from the Ohio Musculoskeletal and Neurological Institute (OMNI) at the Heritage College of Osteopathic Medicine, in collaboration with a colleague from outside Ohio University, finds new evidence to support the belief that the nervous system plays an important role in age-related weakness.

A second published study from an OMNI-based team questions the effectiveness of a patented exercise system for relieving lower back pain.

Seeking the source of age-related weakness

An article published Sept. 25 in JAMA Network Open, a sister publication to the Journal of the American Medical Association, reports findings of a study in which researchers compared how much muscle strength older people could muster voluntarily with how much force their muscles put out when stimulated electrically. According to OMNI’s director, the results of this research suggest that physical weakness in aging may be due, at least in part, to impairments in brain and nerve function, rather than changes in the muscles themselves.

Sharing authorship with Clark on the article are Todd M. Manini, Ph.D., of the University of Florida at Gainesville, and three OMNI researchers: Nathan P. Wages, Ph.D.; Janet E. Simon, Ph.D.; and Leatha A. Clark, D.P.T.

“Dr. Clark and his research colleagues have helped direct thinking in their field toward the role of the nervous system in age-related strength loss, and this latest study reinforces that insight,” said Darlene Berryman, Ph.D., R.D., L.D., associate dean for research and innovation at the Heritage College. “This is research with great potential to improve quality of life for older adults.”

The study looked at a group of 66 older adults (average age in their 70s), who were first categorized as severely weak, modestly weak or strong based on their measured performance on a standardized physical test.

In the study, the subjects were asked to push against resistance with their leg extensor muscles, using as much strength as they could generate. When they reached their self-perceived limit, the muscle they were using was then stimulated electrically. If this caused the muscle to put out more force, Clark explained, it was a sign that the strength limitation the person experienced came from somewhere other than the muscle itself.

“If force goes up (when the stimulation is applied), that lets us know that there’s some sort of deficit or impairment to the nervous system’s ability to activate the muscle,” he said. A major theme of Clark’s research agenda with OMNI has been a holistic focus on muscle function as part of a wider neuromusculoskeletal system.

When the added force that came from electrical stimulation was expressed as a percentage increment, it showed that the weaker the test subjects, the larger a boost their muscles got. The subjects in the “severely weak” group (who were on average older) got an increase of 14.2 percent – twice the 7.1 percent increase shown by those in the “strong” group.

The researchers didn’t investigate the nature of whatever nervous system mechanism might account for the ceiling on willed strength; Clark suggested it could be a matter of neuron function, or could have a psychological/motivational element, or both. Whatever it is, he added, the study has implications for addressing age-related loss of muscle strength, which can seriously reduce seniors’ mobility.

When the conventional scientific wisdom linked such weakness mainly to loss of muscle mass, he said, many drug companies looked for medications that acted directly on the muscles – but few proved effective. The new study provides further evidence that the nervous system plays a significant role in the problem, he said.

Can a special exercise relieve lower back pain?

In a paper published in the September issue of Medicine & Science in Sports & Exercise, Clark and a different team of researchers tested whether a patented exercise technique might help relieve non-specific lower back pain.

Blood-flow restriction (BFR) exercise, known in a patented version as Kaatsu, uses a device to reduce blood supply to a set of muscles that are being exercised. Somehow, this enhances the effects of the exercise on muscle size and strength.

Some research has suggested that this benefit also extends to muscles not subjected to BFR. If BFR is used on one set of muscles, it can reportedly enhance the impact of non-BFR exercise on others, possibly through some type of body-wide endocrine system effect. Clark and his co-authors wanted to see if this reported “cross-transfer of effect” would work to improve the impact of low-load, non-BFR exercise on the trunk extensor (TE) muscles, which often suffer from wasting in people who have non-specific lower back pain.

Using 30 young adults as study subjects, the researchers compared the effects of non-BFR exercise on the TE muscles, with and without an immediately prior session of BFR exercise on limb muscles. They found no significant difference – a finding which, they acknowledge, is at odds with the positive conclusions reported in a number of previous studies.

“The take-away was that our finding was contradictory to the vast majority of the literature,” Clark said. He added, however, that “that did not surprise me at all.” As the paper points out, the new study “implemented rigorous control measures that are lacking from much of the previous work on BFR exercise,” which were meant to minimize possible bias effects. These included “blinding” the experiment’s outcome assessors, data analysts and statistician, so they did not know whether data they looked at came from the test or control group.

“Research with negative findings, while sometimes not given the attention of positive results, is essential to the field,” Berryman noted. “This study should be a healthy spur to further investigate the benefits of blood-flow restriction in exercise.”