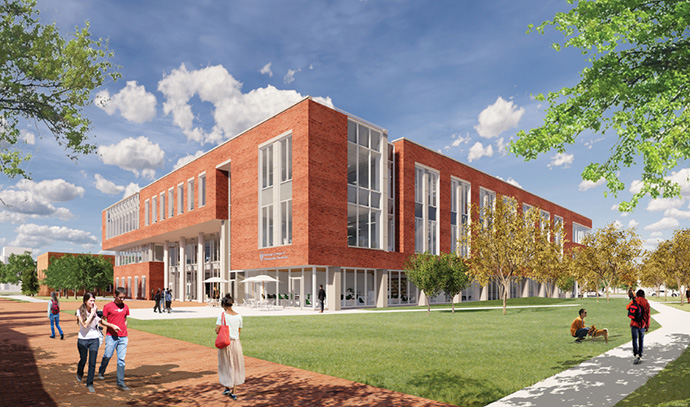 The Ohio University Board of Trustees today approved a name for a new Heritage College of Osteopathic Medicine education facility in Athens, which honors the generosity of the Osteopathic Heritage Foundation in helping to make the new building – and other transformative college projects – possible.

The new state-of-the-art learning facility, now under construction on Union Street in Athens, will be known as Heritage Hall in recognition of the critical importance of OHF’s historic $105 million award to the college, Vision 2020: Leading the Transformation of Primary Care in Ohio, which was announced in 2011. This award includes $21 million allocated for construction of the new Athens facility.

“It would be hard to overstate the incredible impact that the Vision 2020 award has had, and continues to have, on the Heritage College and its ability to serve the people of our state,” said Ohio University President M. Duane Nellis, Ph.D. “It is wholly appropriate that the name of the new medical education facility, which will help take the college to a whole new level of excellence, should commemorate this extraordinary ongoing legacy.”

Ken Johnson, D.O., Heritage College executive dean and OHIO chief medical affairs officer, said the OHF has been an engaged partner with the college in directing the Vision 2020 funds to where they will do the most good.

“Creating a new facility custom-designed to deliver our groundbreaking new curriculum clearly fits into OHF’s vision for transforming primary care in Ohio,” Johnson said. “We’re so grateful that the Foundation recognizes that and was willing to work with us to direct some of the funds to empower this exciting project.”

Terri Donlin Huesman, president/CEO of OHF, said, “The Osteopathic Heritage Foundation is proud of its early role in enabling this new, modern medical education facility. The naming of the facility, Heritage Hall, will perpetuate and honor the heritage of osteopathic medicine by creating new and innovative ways for future physicians to empathically find health and healing for those they serve. This facility, coupled with other college priorities, will help solidify the Heritage College’s position as a national leader in medicine, education, research and community service.”

The trustee resolution that approves the naming of the building notes that OHF “recognizes the need for parity in state-of-the-art learning environments” across the Heritage College’s three academic campuses in Athens, Dublin and Cleveland.

The Dublin and Cleveland campuses, which opened in 2014 and 2015, respectively, were custom-built with the latest in learning technology. The Dublin campus, also funded by the OHF Vision 2020 award, is located in a former business park, and the Cleveland campus is housed within Cleveland Clinic’s South Pointe Hospital campus. The Athens campus, which dates from 1976, is housed in former Ohio University residence halls that were constructed in the 1960s. The new facility will enable the Heritage College to achieve the technology integration necessary for medical education and research collaborations across the campuses.

Heritage Hall, expected to open in 2021, is designed to emphasize collaborative modern learning styles, environmental sustainability, and personal wellness for students, faculty and staff. The college is seeking WELL Building Standard certification for the building, which will feature a fresh-food in-house café, fitness room, mindfulness and lactation rooms, bike racks, sky lights and filtered water at every faucet. It will also create outdoor connections with views, daylighting and green space.

In August 2016, the Ohio University Board of Trustees approved a six-year capital improvement plan for fiscal years 2017 through 2022, which included the project to move the Heritage College into new facilities.

The 2011 OHF award has been invested in a wide range of transformative projects in addition to supporting the new Athens facility and the Dublin campus. These have included significant student scholarship opportunities, programs for increasing the number of physicians practicing primary care in Ohio who serve rural and underserved communities, expansion of research infrastructure and strategies for increasing research productivity, and initiatives to strengthen community outreach.

Watch a video announcement by Dr. Johnson about the naming of the new building.