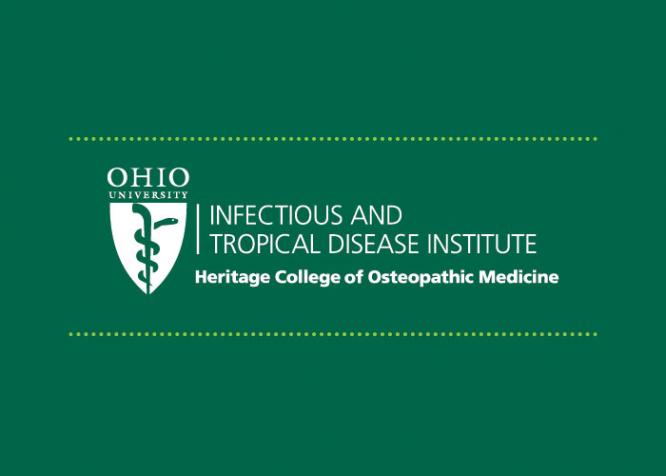 The Infectious and Tropical Disease Institute (ITDI) at the Ohio University Heritage College of Osteopathic Medicine is most widely known for its work combating the spread of insect-borne diseases such as Chagas in Latin America. But a new project launched by the institute in its home territory of southeastern Ohio aims to head off a possible outbreak of human immunodeficiency virus (HIV) and hepatitis C (HCV) – infections spread mainly through intravenous drug use.

“ITDI has a long track record of working with communities in Ecuador on health issues,” said Director Mario Grijalva, Ph.D. “We wanted to bring that experience to the Appalachian region – and ensure local organizations and OHIO faculty and students have the resources to share their expertise on infectious diseases locally. For us, it’s about expanding our services utilizing the existing expertise at the university.”

Kicking off a local outreach effort

The project is the first funded by a new ITDI community outreach initiative, which aspires to support up to two regionally based ventures per year at up to $10,000 each (the first grant is for this full amount). The inaugural project will enhance an existing Blood Borne Pathogen Harm Reduction Program offered by the Athens City-County Health Department, which includes needle exchange for intravenous drug users. ITDI’s contribution will be to provide this program’s clients with education on the transmission of HIV and HVC, and a chance to be tested for these diseases during their visits to the department.

“We already know how effective ITDI has been in working across national borders with local populations and agencies to promote global health,” said Ken Johnson, D.O., Heritage College executive dean and Ohio University chief medical affairs officer. “It’s wonderful to see the institute taking international lessons learned and applying them locally. I have no doubt that their expertise and engagement will be of great benefit to southeast Ohioans.”

Sharon Casapulla, Ed.D., M.P.H., one of two principal investigators on the project, said she wanted to learn more about harm reduction in Athens County after coordinating a visit to a Cleveland free clinic. As director of education and research with the Heritage College Rural and Urban Scholars Pathways (RUSP) program, Casapulla led a workshop to the Cleveland facility, whose harm reduction program offers disease testing, education and health care referrals.

“It was clear to me how beneficial these programs really are,” she said of the experience. “The workshop also changed the perspective of some of our medical students regarding needle exchange programs.”

Injecting drugs is a common way for HIV and HCV to spread, and Casapulla noted that Athens County is considered at risk for major increases of these infections. According to the Ohio Department of Health, the county’s rates went up significantly from 2009 to 2016, and in 2018 the U.S. Centers for Disease Control and Prevention included it on a list of 220 counties nationwide that are at risk for an outbreak.

“I’ve been saying it for the past 13 years since I’ve been here: ‘Just wait! It’s coming! It’s coming!’” said co-P.I. Tania Basta, Ph.D., who until recently was chair of the Department of Social and Public Health in OHIO’s College of Health Sciences and Professions (CHSP). “We’re on the cusp of what could be a major problem.”

Research that Basta published in 2015 with two academic colleagues offers a defense strategy. The researchers provided 60 clients of a local mental health agency, most of whom had been drug abusers at some point, with a brief educational session on HIV, prevention, treatment and testing. “We asked them immediately afterwards whether or not they’d like to get tested there on the spot for HIV,” Basta recalled. All but three said yes, suggesting this approach works well.

Basta helped create the informational slide show to be used in the new program, which Casapulla said will be delivered by Heritage College medical students and MPH students from CHSP. If someone tests positive for HIV or HCV, the health department will help connect them to care. The project will also fund provision of a year’s supply of 12,000 clean needles. Clients will be surveyed before and after the education sessions to track changes in their knowledge levels and sense of stigma around intravenous drug use. The program is scheduled to start serving needle-exchange clients this summer.

Kate Spencer, a rising second-year medical student in the Rural and Urban Scholars Pathways program, will be one of the students presenting the educational material.

“My family is from the area, and I have seen a lot of addiction and what it can do,” said Spencer, a graduate of Athens County’s Trimble Local Schools. When she learned from Casapulla about the project to enhance the harm reduction program, she said, “I thought that would be a really great thing to be able to participate in –I could actually make a difference and directly help someone.”

Lori Lammert, director of operations for ITDI, said that while the institute prides itself on its work in Latin America – which includes HIV education and prevention efforts – it wants the public to know that it also uses its resources to improve public health in southeastern Ohio.

“We are trying to bring some visibility to this initiative,” she said. “We want to make sure that people know ITDI is more than just Ecuador; it’s more than just Chagas. There is more going on.”